Highway robber. Convict. Runaway. Mother. She will do anything for freedom, but at what cost?

Jenny Trelawney is no ordinary thief. Forced by poverty to live in the forest, she becomes a successful highwaywoman – until her luck runs out.

Transported to Britain’s furthest colony, Jenny must tackle new challenges and growing responsibilities. And when famine hits the new colony, Jenny becomes convinced that those she most cares about will not survive. She becomes the leader in a grand plot of escape, but is survival any more certain in a small open boat on an unknown ocean?

Meg Keneally’s debut solo novel is an epic historical adventure based on the extraordinary life of convict Mary Bryant.

Inspired by the life of Mary Bryant, the woman behind one of history’s most daring escapes, Fled takes the reader on an incredible historic adventure, from Cornwall to Australia, and then beyond. It’s an exceptional tale of endurance and survival, the events and characters interwoven throughout the story firmly embedded in history.

‘This woman, thought Jenny, has never had to eat limpets. Has never had to experience the kind of cold that kills a baby. Has never had to worry that an absent school of pilchards will destroy her. Perhaps her father had paid for the necklace, the bonnet, the shawl. Perhaps he yet lived, and had no need to choose between starving and placing himself in the hands of the midnight sea.’

I’ve read many novels about convicts and early settlement of Australia, but Fled is the first I have read that is about the first fleet. What an astonishing account this was, beyond hardship and the realms of reasonable justice for crimes committed. Survival was such a tenuous concept. I have to wonder what sort of short straws the admiralty drew in order to get sent to the newest colony of the British Empire. It certainly wasn’t a reward posting! Their conditions were only fractionally better than that of the convicts. And the treatment of convicts was so bad, an unending abuse of human rights that seemed perfectly acceptable within the context of the era. What a depraved legacy for the British Empire.

‘Some of the female convicts had been in there for months, some longer. Some had nearly served out their sentence. True to the word of the overseer on the deck, there were no canvas slops for any of them, so that those who had sat in their own ordure for any length of time wore ragged shadows of the clothes they had stood in to hear the sentence of the court.’

This is also my first taste of the writing of Meg Keneally. I find her style so richly atmospheric, she really pulls you in to the story, puts you right into Jenny’s shoes. I felt entirely wrapped up in this adventure, enraged at the terrible injustices heaped upon Jenny, sorrowful about the inevitability of the tragedies that unfolded. The details of what the first fleet experienced were so meticulously wrought, from establishing some measure of order out of the chaos of having so many people condensed into a society without structure or the means to flourish, to first contact with the native Aboriginal people and the endless misunderstandings that ensued. I whipped through this novel, barely wanting to put it down, it was so enthralling.

‘There was enough light, just, for Jenny to make out the glowering shape of South Head. Even had there not been, she would have known they were leaving the harbour. The seas became rougher; the nose of the boat rose and then fell, sending spray onto those in the front. But she would never know if that night lookout was asleep, or daydreaming, or unable to see far enough in the darkness. She would never know if the sound of their passage, which seemed to cry out like a horn, was loud enough to echo up the cliff into his ears. No musket was fired, no signal fire was lit, and no shouted warnings floated across the bay.’ 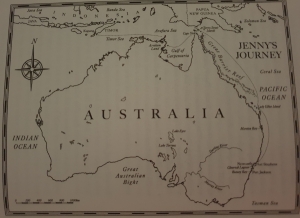 What I loved about Jenny was that despite her criminality, which was something she literally fell into, she was ultimately a protector. Once she became a mother, every single thing she did, every decision she made, was for the protection of her children. When faced with starvation at Sydney Cove, she plots and convinces her husband that escape from the colony is their only means of survival. What follows is one of the most extraordinary journeys of escape. When I examined the map included with the story – pictured here – I was rather stunned that they survived. The distance they traversed, how close they came to death, on more than one occasion. That this novel is based on a real woman from history – wow!

‘She knew the newspapers usually thundered against people like her, calling for their excision from the civic body. But not now. Now, they had found someone of exactly the right shape around which to build a scaffold of martyrdom and heroism. Someone to be pitied and admired all at once. Someone who could bring people close to danger, without them actually having to smell it. Several of the papers had taken to calling for mercy for this woman who had risked so much, gained so much and lost so much.’

But this journey of escape is not where Jenny’s journey ends. Unfortunately, life was ready to continually remind her of her insignificance as a convict, over and over. There is a lot of sorrow throughout this story and it’s grim for the most part, but I never felt weighted down by this. The history and Meg’s deft hand with shaping her story more than compensated for all of the misery, along with the hope sprinkled into the ending. This is very much the type of historical fiction I enjoy the most. I highly recommend Fled, it’s an excellent novel that deserves a wide readership and the highest of accolades.

‘He was the kind of person whose death stood politely behind the door like a servant with a tray. Present out of necessity, but easy to ignore. When it eventually did step into the drawing room, its arrival would be marked by a genteel funeral with restrained mourners. Jenny’s death sat with her in prison, whispering promises of public putrefaction. It had walked in shrunken skin beside her at Sydney Cove. It sat with her on the boat, eyeless and bloated. And it had crouched just behind the horizon in Coepang.’

Thanks is extended to Allen and Unwin for providing me with a copy of Fled for review.

Meg Keneally worked as a public affairs officer, sub-editor, freelance feature writer, reporter, and talkback radio producer, before co-founding a financial service public
relations company, which she then sold after having her first child. For more than ten years, Meg has worked in corporate affairs for listed financial services companies, and doubles as a part-time Scuba diving instructor. She is co-author with Tom Keneally of The Soldier’s Curse and The Unmourned, the first two books in The Monsarrat Series. Fled is her first solo novel. She lives in Sydney with her husband and two children.