A mesmerising, harrowing and ultimately uplifting novel from the 2015 Miles Franklin winner.

Abandoned by her mother as a toddler and only occasionally visited by her volatile father who keeps dangerous secrets, Justine is raised solely by her Pop, an old man tormented by visions of the Burma Railway. Justine finds sanctuary in Pop’s chooks and The Choke, where the banks of the Murray River are so narrow they can almost touch—a place of staggering natural beauty that is both a source of peace and danger. Although Justine doesn’t know it, her father is a menacing criminal and the world she is exposed to is one of great peril to her. She has to make sense of it on her own—and when she eventually does, she knows what she has to do.

A brilliant, haunting novel about a child navigating an often dark and uncaring world of male power, guns and violence, in which grown-ups can’t be trusted and comfort can only be found in nature, The Choke is a compassionate and claustrophobic vision of a child in danger and a society in deep trouble. It once again showcases the Miles Franklin Award-winning author as a writer of rare empathy, originality and blazing talent. 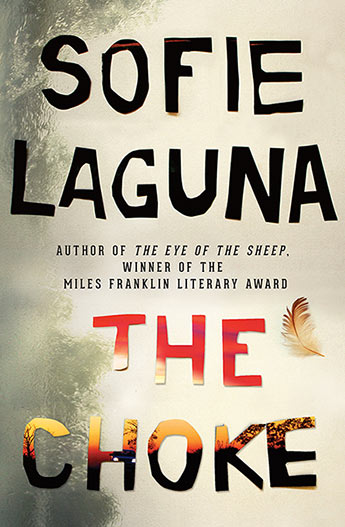 Sofie Laguna’s latest novel for adults, The Choke, is a powerful story about a topic I have particularly strong personal feelings about: child neglect. A recent paper (June 2017) published by the Australian Institute of Family Studies presented a snapshot of data on child protection activity within Australia from 2011-12 through to 2015-16. Bearing in mind that these statistics only show what’s reported – there’s no way of knowing just how many children experience some form of abuse – it came as no surprise to me to see neglect as the second most common form of child abuse throughout Australia. In writing The Choke, Sofie Laguna has cast a light onto a very dark corner of Australian society. Despite being set in the early 1970s, the themes and issues presented within The Choke are highly relevant today. With The Choke, Sofie has turned the novel into a powerful sociological medium of expression, no small feat, yet she’s achieved it with an empathetic depth that cannot be rivaled.

Our protagonist in The Choke is Justine, 10 years old when we meet her, 14 at the novel’s end. Justine is a child ignored; she’s underfed, has no social skills, and is intellectually repressed with an unrecognised learning disability. Abandoned at the age of three by her mother, her father is a criminal; her aunt, one person who could have possibly made a difference for Justine, is estranged from the family. Justine’s main carer is her Pop, alcoholic, suffering severe untreated PTSD from being a Japanese prisoner of war forced to work on the Burma railway, and inadvertently responsible for his wife’s death through domestic violence. Justine exists. That’s it. Nothing more.

“When Pop spoke to me, it was the same as when Dad did. The words were there, but it was as if they were speaking to themselves. I was just an excuse.”

Experiencing the story as Justine shows us just how much this neglect impacts her. With a child’s observation, Justine goes about her days, and we see, with painful clarity, what neglect has done to her. What it does to all children. I read The Choke with a feeling of dread, knowing that there was danger ahead for Justine, in so many places, as she was completely without protection or even the intellectual and social skills to recognise harmful situations. Her repression had also left her without the verbal skills to even articulate what she wanted to say in any given situation. In order to make sense of the world, she brings everything back to having been born breech. It’s her reasoning for life; why her mother left her, why she can’t understand things, why she can’t read, why she isn’t loved.

“I shook my head. Pieces were missing. It was the breech. I didn’t understand.”

Yet, Justine doesn’t use ‘the breech’ as an excuse. Rather, it’s something she takes responsibility for. As if she might have actually been able to control her own position within her mother’s womb. The weight this child carries is profound and incredibly painful to bear witness to. She’s definitely not ignorant of her neglect, but she is accepting of it, and that makes it all the more devastating. She’s a child who expects the worst and usually gets exactly that. For a brief time, Justine experiences a wonderful friendship with a classmate, Michael, who suffers from a physical disability. A highly empathetic child, Michael is the first person in Justine’s life to be consistently there for her and always good to her. The affect he has on her can be summed up in this quote:

“When Michael asked me questions, he waited for my answers. He wanted to find out. He wouldn’t go on until I answered. It was the opposite of invisible.”

The river plays an important part in Justine’s story. It’s her safe place; a place she retreats to for peace and protection. Highly imaginative, she draws inspiration from old John Wayne movies and wraps herself up in these fantasies for protection. In times of stress, she puts herself into the shoes of favourite characters and tries to think as they would. It’s a coping mechanism, but also a sign of her inner distress, a way for her to escape from the harsh reality of things she simply can’t deal with. Ironically, at a crucial moment when she needs courage, John Wayne pulls through for her and she takes control of a situation, no longer content to just let everyone else dictate the terms of her life to her.

The Choke is a powerful novel, finite in its detail and tense in its delivery. It shows the complexity of child neglect, how impossible it can be to contain. There is no one thing in Justine’s life that can be considered the reason why she is neglected; no one thing to change for a different outcome. There are a whole host of social problems merging and Justine’s neglect is only one consequence of this. Setting the novel back in the 1970s doesn’t cast this social crisis as an historical one, rather, it highlights how dire the situation is; prevalent back then and prevalent now. The Choke is a novel yet it’s so much more; it is truth embedded in fiction, a case study on family crisis and social welfare in rural Australia. It has left me haunted, contemplative, and richer for the experience. Sofie Laguna is a rare talent; a writer entirely in a class of her own.

Thanks is extended to Allen and Unwin for providing me with a copy of The Choke for review.
The Choke is book 52 in my 2017 Australian Women Writers Challenge.