Elle Campbell is a glossy, lycra-clad mum with washboard abs, a ten-year plan and a secret past. Abi Black has quit sugar, moved to the country and is home-schooling her kids. Leisel Adams slogs away at her office job each day before rushing home, steeped in guilt, to spend precious moments with her kids before bedtime.

When all three women are nominated for a prestigious blogging award with a hefty cash prize, the scene is set for a brutal and often hilarious battle for hearts, minds-and clicks. As the awards night gets closer, their lies get bigger, their stunts get crazier – and some mistakes from the past become harder and harder to hide.

The Mummy Bloggers is a frank and funny look at the perils and perks of life online. 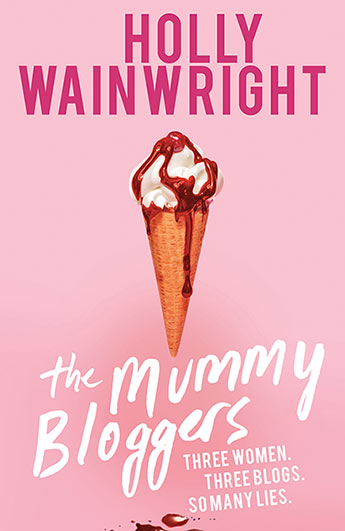 Do you have what it takes to be a blogging superstar? I definitely do not. And after reading The Mummy Bloggers, I’m not sure I would even want to go there! This debut novel by Holly Wainwright is both hilarious and shocking in equal measures. There were times I found myself laughing uncontrollably but also feeling guilty about what I was laughing at. It’s that kind of novel. Snarky, sarcastic, funny, outrageous, and entirely authentic – kind of like reality TV wrapped up in a book.

I loathed Elle, thought Abi was hilarious, and really loved Leisel. Out of the three, Leisel was the most authentic. Her motivation for blogging was all about fostering connections and establishing a support network for likeminded mums. While her focus was often misplaced, her purpose remained true: to create an influence that counts. She was the character I was most invested in and who I was secretly championing as my chosen winner of the blogging award. #authenticLeisel

There was no possible way to relate to Elle – which was the author’s intent – but I was, to be honest, quite surprised that a person like her would be so popular. Everything about her blog was superficial, self-obsessed and fake. She was totally without a moral compass and there wasn’t a single time I felt a shred of empathy towards her. #insufferableElle

Abi, as a blogger, was in some ways just as bad as Elle; she thought nothing of lying online about her beliefs. The more outspoken she could be, the better. Honing in on contentious issues just for the sake of stirring up a hornet’s nest was one of her favourite pastimes, followed closely by gleefully watching the fallout online. But unlike Elle, Abi was self-aware, and as time rolled on, her maturity, empathy, and personality prevented her from continuing to push agendas that she was fundamentally opposed to just for the sake of garnering ‘likes, comments and shares’. By far the funniest character, she really had me in stitches over and over. #pricelessAbi

In crafting such vastly different characters, varying social media experiences were successfully showcased in a holistic way. Well balanced against each other and well crafted, all three characters shone under their respective spotlights, with a depth and realism that comes from knowing your subject.

For author Holly Wainwright, who is Head Of Entertainment at Mamamia Women’s Network, The Mummy Bloggers was a story just begging to be told:

“What inspired The Mummy Bloggers was watching the current crop of bloggers cross over to become bonafide celebrities. They carry more influence than most people on our TV screens. The impact this kind of sharing has on ‘ordinary’ mothers is remarkable – from the incredibly positive support networks to the worryingly competitive atmosphere. I began to wonder, ‘What does it take to stay so very interesting?’ And, ‘How much of what we’re reading is true?’ It seemed to me like a rich area for drama and humour.”

In her acknowledgements, Holly Wainwright pays homage to the real ‘Mummy Bloggers’ out there, the parents who share their lives online:

“There was a time when mothers had to shut up and smile. Now, telling the stories that allow other women to feel just a little more normal, more connected and understood is no small thing. ‘Mummy Bloggers’ or not, the lives of countless women around the world are a little less isolating because of you.”

I feel this sums up the intent of this novel so well. The truth of what we see online is incredibly subjective. The expectations this creates, the unattainable images we have no hope of living up to. And then there’s the trolls, those people who hide behind their keyboards and anonymous online identities, spreading their poison daily far and wide. They don’t care that their barbed comments are piercing real people. They’re ‘entitled’ to their opinion and they have a right to ‘free speech’. Despite this, the heart of blogging and social media beats with a community of like-minded spirits trying to feel a little less alone, a little less judged, and a little more liked, even if it is with people they only know online. I don’t think this is a bad thing and I think Holly Wainwright demonstrates this superbly throughout The Mummy Bloggers. This novel is my book club pick for this month and I can’t wait to get together with the other members to talk about it. I’m ready for some insightful observations! If you enjoyed Big Little Lies by Liane Moriaty (which I did), then you will certainly enjoy The Mummy Bloggers.

Thanks is extended to Allen and Unwin for providing me with a copy of The Mummy Bloggers for review.

The Mummy Bloggers is book 55 in my 2017 Australian Women Writers Challenge.