The Storm Beyond the Tides… 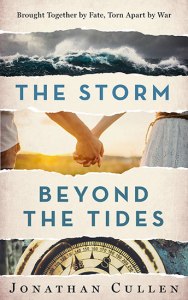 July 1939. War is on the horizon but on Monk Island, Maine life goes on as usual. As the daughter of a lobsterman, Ellie Ames’ future seems limited until a mysterious German couple comes off the ferry with their nineteen-year-old son. From the moment she meets Karl Brink, the two become inseparable and not everyone approves because locals are suspicious of outsiders. Ellie ignores their scorn, however, and the secret she learns about Karl’s family makes her even more determined to be with him.

The magical summer ends when the Brinks suddenly have to go home. And although Karl promises to return in the fall, by then Europe is at war. Two years pass and Ellie has all but given up hope when she gets a letter in the mail that will change her life forever.

The Storm Beyond The Tides is the story of the unlikely romance between a small-town girl and a German on the eve of the Second World War and explores a frightening time in America’s past—when U-Boats prowled the East Coast and put small, coastal communities on the frontline of a global conflict.

More and more when I read novels set during the era of WWII, I am seeking ones that explore life on the home front, rather than in the occupied territories. Mainly because I’ve read a lot of WWII fiction and as with any topic, I like a bit of variation. The Storm Beyond the Tides is set on an island off the coast of Maine, USA.

Surprisingly (to me), there are actually quite a few islands off the coast of Maine (about a dozen). I find that lifestyle quite interesting to read about, employment obviously dominated by fishing and lobster catches, as well as tourism. But I expect the lifestyle is fraught with economic concerns, being both small in community size and isolated on account of being islands. Jonathan Cullen recreates this atmosphere and taps into island life quite comprehensively throughout this novel and I enjoyed this rich sense of atmosphere immensely. It was like I was not only stepping back through time, but also visiting a place I knew very little about.

Prior to reading this, I had no idea that these Maine Islands were so involved in WWII. Not only were there military bases there, but German U-Boats within range. And this is what home front WWII fiction can bring to readers – a whole new perspective on the ‘world’ part of WWII. It was all quite fascinating but equally as grave and the sacrifice that communities within these small islands made cannot be overstated and nor should it be forgotten.

“Ellie Ames,” he said bitterly. “The only girl on Monk Island who would go with a Kraut, but not a local.”

Whilst romance provides the catalyst for many events throughout the novel, I wouldn’t pin this story down as a mere war time romantic tale. It has a lot more substance than that and explores many themes around discrimination and tolerance, socioeconomic imbalances, and family obligation. Karl’s story also offers a perspective on German resistance to the rise of Nazism.

‘A few weeks before she had cursed God and she now found herself thanking him. Someone had been taken from her, but someone was returned and in an instant, her faith in the world was restored.’

Anyone with a interest in historical fiction set in the WWII era will appreciate this novel and if you’re looking for a fresh perspective, a view on the era from a new location, then The Storm Beyond the Tides would be an ideal read for you. It has wide appeal and is a very engaging read.

Thanks is extended to the author for providing me with a copy of The Storm Beyond the Tides for review.

Jonathan Cullen was raised in Boston and attended public schools. After a brief career as a bicycle messenger, he attended Boston College and graduated with a B.A. in English Literature (1995). During his twenties, he wrote two unpublished novels, taught high-school in Ireland, lived in Mexico, worked as a prison librarian and spent a month in Kenya, Africa before finally settling down three blocks from where he grew up.
He currently lives in Boston (West Roxbury) with his wife Heidi and daughter Maeve.

The Storm Beyond the Tides
Released August 2019
Available from Amazon

12 thoughts on “Book Review: The Storm Beyond the Tides by Jonathan Cullen”

#sundayvibes #cooking #baking #fortheloveoffood
#tgif #reading thanks to @harpercollinsaustralia for this #specialedition of The Seven Skins of Esther Wilding by @hollygoeslightly 🐚
Since the passing of Queen Elizabeth II, there has been a multitude of magazine tributes popping up. I have been holding off buying any of them, despite my love of royal photo tributes, and I’m glad I did because this beautiful book that The Australian Women’s Weekly has brought out as a tribute to our late Queen’s life trumps them all. Simply titled, The Queen, it is a photo history of her life. There are articles peppered throughout, from the WW archives, but overall, it was the photos I bought this for and there are 200 glorious pages of them. It did not disappoint. I bought this book and am under no obligation to review it but I just wanted to share it here for any others who loved our Queen and would treasure a memorial like this. I bought my copy from Big W but I’d say it would be available anywhere you can buy The Australian Women’s Weekly from. Highly recommended! 👑👑👑👑👑