Meet Me At Lennon’s… 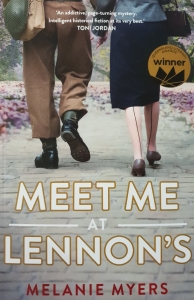 As university student Olivia Wells sets out on her quest to find an unpublished manuscript by Gloria Graham – a now obscure mid-twentieth century feminist and writer – she unwittingly uncovers details about a young woman found murdered. Strangled with a nylon stocking in the mangroves on the banks of the river in wartime Brisbane, the case soon became known as the river girl murder.

Olivia’s detective work exposes the sinister side of that city in 1943, flush with greenbacks and nylons, jealousy and violence brewing between the Australian and US soldiers, which eventually boiled over into the infamous Battle of Brisbane. Olivia soon discovers that the diggers didn’t just reserve their anger for the US forces – they also took it out on the women they perceived as traitors, the ones who dared to consort with US soldiers.

Can Olivia rewrite history to bring justice to the river girl whose life was so brutally taken? Even if the past can’t be changed, is it possible to undo history’s erasure?

Winner of the 2018 Queensland Literary Award Glendower Award for an Unpublished Manuscript.

I really enjoyed this novel, Meet Me At Lennon’s. Looking through an altered lens of wartime Brisbane, it stripped away the romanticism that often typifies war fiction. Brisbane as a military town was quite an interesting place. The US soldiers were for the most part idle, flushed with cash and contraband (stockings, cigarettes, chocolate); while the Australian soldiers were battle weary and resentful, watching from the sidelines as their US counterparts dazzled the local girls and ‘sullied’ them in the process. This is not a story though about one set of soldiers being better behaved or more respectful than the other. Rather, it is a story about the women of Brisbane and how their safety was compromised from being surrounded by so many men; how their morality was questioned; how they were often subjected to harassment and assault, and then expected to shoulder the blame for their own mistreatment.

Meet Me At Lennon’s is a dual narrative, but it differs to most that I have read in the past. The historical narrative is presented more in the fashion of short stories about women living in Brisbane and their experiences with soldiers. The women are all connected in some way, and we do return to some of the women over the course of the novel, but it was a very different sort of narrative to what you usually find within this style. It was more implicit and with clearer intent on highlighting what being a woman and going about your business entailed. The encounters and propositions, the positives and the negatives – the experiences varied widely. I really liked the way this historical narrative read. It was intelligently offered and not bogged down with genre conventions. There was a lot exposed through this narrative that was rather eye opening, much in the way that murky, swept-under-the-rug history could be once it has been dusted off.

“She’d been assuming River Girl was a random victim, but sexual offences of the ‘closer to home’ variety…made up the bulk of the files. They also invariably involved ‘carnal knowledge of a girl under 17’. That the girls in these cases were, more often than not, described as being ‘backward in [her] mentality’ or having ‘the mentality of a child of 12’, probably said more about the Mariana Trench-depth sexism of the time than the girls themselves.”

The contemporary narrative of the novel was rather interesting as well. I liked the protagonist, Olivia Wells, and felt the authenticity of her struggles and focus with her PhD manuscript. The threads between the two timelines were more embedded than you are first given the impression of and again, there was this implicit nature to the narrative that I enjoyed. It relied on the reader closely paying attention and then relishing those moments of awareness and connection. Thematically, I appreciated how the author connected those safety issues for women across the two narratives, inadvertently posing the question of what has changed, if anything. Are women safer today? Or are they still facing the same dangers within an altered context? Again, these themes are explored implicitly, giving the reader plenty of space to consider within their own mindset. If I have any quibbles at all about the novel, it did contain many characters and at times, particularly in the historical narrative, I had to really think about who this person was, had I met them yet, or was this their first appearance. This was minor though, but if you were not reading closely, you could get a bit off track and not know who was who and whom they were connected to.

Meet Me At Lennon’s contains aspects of crime and mystery, but it is not a crime novel. The historical aspect offers a wealth of social history, and conjures Brisbane of the early 1940s with a sublime atmosphere. Anyone from Queensland will appreciate the rich detail of this setting. Meet Me At Lennon’s is highly recommended reading for fans of quality literary fiction. I’m looking forward to reading more novels by Melanie Myers in the future.

Thanks is extended to University of Queensland Press (UQP) for providing me with a copy of Meet Me At Lennon’s for review.

Melanie Myers is a writer, academic and actor with a DCA in Creative Writing from the University of the Sunshine Coast. She has been published in Kill Your Darlings, Arena Magazine, the Brisbane Times, Overland, and Hecate, and various trade publications. Melanie’s short fiction has also won or been shortlisted for various literary competitions, including the Scarlett Stiletto Awards, S.D. Harvey Short Story Award, the Lane Cove Literary Award and Griffith Review Novella competition. She is the former artistic director of Reality Bites Festival, a non-fiction writers’ festival based on the Sunshine Coast.

8 thoughts on “Book Review: Meet Me At Lennon’s by Melanie Myers”