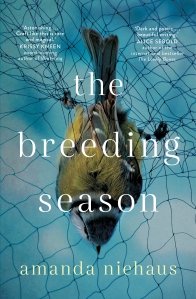 The rains come to Brisbane just as Elise and Dan descend into grief. Elise, a scientist, believes that isolation and punishing fieldwork will heal her pain. Her husband Dan, a writer, questions the truths of his life, and looks to art for answers. Worlds apart, Elise and Dan must find a way to forgive themselves and each other before it’s too late.

An astounding debut novel that forensically and poetically explores the intersections of art and science, sex and death, and the heartbreaking complexity of love. The Breeding Season marks the arrival of a thrilling new talent in Australian literature.

The Breeding Season is an unsettling read. The writing is wholly absorbing: atmospheric and beautifully tangible. I loved how the rains were woven into the narrative, almost like a living character in itself, its presence a force that demanded attention. In fact, every setting within this novel was brought to life with a careful attention to detail; this was perhaps my favourite aspect of the novel. It’s quite a gift to be able to use words to such an effect. Likewise, the experiences of grief were explicitly authentic and truly heart breaking. I felt so much sympathy for Elise and Dan, each lost within their grief, desperately needing each other yet entirely unable to overcome the breach. I felt this was a highly realistic response from two people who had been through what they had.

I was very interested in Elise’s field work and enjoyed those parts of the story where she was out and about, immersed in her work. I could relate to her need to focus and keep busy as a means of working your way through such deep grief. Dan’s obsession with his own work I felt less engaged with. I found his obsession with his uncle’s muse disturbing and his eventual actions were a disappointment. A husband’s response to his grief and inability to connect with his wife during such a volatile and desperately sad time should not be to sleep with another woman. The use of this trope soured my liking for this novel, I have to admit. I don’t feel this was a value added plot device. I cared about this couple as a unit, but when considered individually, my interest lay more with Elise and what was happening to her. I found myself disconnecting with Dan from this point on, no longer caring what actually happened to him, my concerns for Elise and what finding out about this would do to her in her fragile state over-riding Dan’s plight. Perhaps this was an intended response by the author?

There are themes running through this novel that certainly lead to deeper thought. Ideas around gender and sex roles are deeply explored, within both animals and humans. Although I have to say, for me, this story goes overboard with references to genitalia. A search and destroy on the word ‘vulva’ back at the editing stage would have been a jolly good idea. I’m pretty sure this is the most I’ve ever seen that word written in a fiction novel. It just became a bit too much. Maybe I’m a bit of a prude, I’m happy to cop that! This aside, I did find the discourse around sex roles rather engaging from a sociological point of view.

Literary fiction is a tricky beast and sometimes it can have a tendency to lean towards grim. And so it was with The Breeding Season; there wasn’t a lot of joy within these pages, so readers should be prepared for this. But it is a quality debut that sets the stage for Amanda Niehaus very nicely. I’m quite partial to novels with themes of science so I’ll be looking out for more of her work.

Thanks is extended to Allen and Unwin for providing me with a copy of The Breeding Season for review.

Amanda Niehaus is a scientist and writer living in Brisbane, Australia. She has a PhD in ecological physiology, a branch of biology that examines the effects of environments on bodies, and most of her research has focused on metamorphosis or the nexus of sex and death. Amanda is interested in the interplay between scientific concepts and human bodies, desires, and fears. Her essays, stories, and poems have appeared or are forthcoming in Creative Nonfiction, AGNI, NOON Annual, Griffith Review, The Writer, and Overland, among others; have been anthologised in Best Australian Essays; and her story “Breeding Season” (on which this novel is based) won the 2017 VU Short Story Prize. The Breeding Season is her first novel.

The Breeding Season
Published by Allen and Unwin
Released September 2019

4 thoughts on “Book Review: The Breeding Season by Amanda Niehaus”