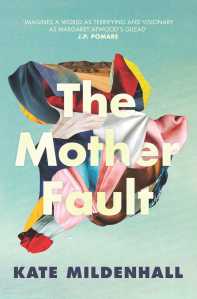 Imagining a near future as terrifying as Margaret Atwood’s Gilead, a riveting tale of one woman taking on the world to save her own.

You will not recognise me, she thinks, when I find you . . .

Mim’s husband is missing. No one knows where Ben is, but everyone wants to find him – especially The Department. And they should know, the all-seeing government body has fitted the entire population with a universal tracking chip to keep them ‘safe’.

But suddenly Ben can’t be tracked. And Mim is questioned, made to surrender her passport and threatened with the unthinkable – her two children being taken into care at the notorious BestLife.

Cornered, Mim risks everything to go on the run to find her husband – and a part of herself, long gone, that is brave enough to tackle the journey ahead.

From the stark backroads of the Australian outback to a terrifying sea voyage, Mim is forced to shuck off who she was – mother, daughter, wife, sister – and become the woman she needs to be to save her family and herself.

What a diverse writer Kate Mildenhall is! I read – and loved – her debut novel, Skylarking, which was literary historical fiction. Here she is now with her second release, The Mother Fault, an absorbing blend of science fiction with eco-literature; the type of dystopian world building that is uncomfortably, and frighteningly, familiar in terms of global projection.

The Mother Fault reads like a pacey dystopian thriller, but take note of the setting, the state of the country that Mim is travelling through, and you have a significant work of eco-literature, the representation of a planet in crisis. It’s this world building, alongside the compelling plot peopled by realistic characters that makes this novel a standout read.

At the same time as reading this, I began watching a television series called The Man in the High Castle, a dystopian thriller that gives an alternate view of the world post WWII; a world in which the Nazis and the Japanese were victorious and had subsequently split the world between them. Although set almost 100 years apart, the ‘Department’ Stasi style of control over society, the ever-present daily fear, the notorious ‘BestLife’ estates which mirrored Nazi purification policies; there were more similarities than differences between this novel and that show. A society where we are all microchipped, tracked and controlled, powerless when something goes wrong. Funds cut off, children removed from your care, your passport confiscated; every move you make seen and recorded. Truly frightening to behold.

At the heart of this novel though is an intricate and deeply meaningful story about motherhood. Mim is entirely relatable as a character. Kate examines in great depth through Mim’s characterisation the many ways in which we as mothers constantly judge ourselves and count our failings above our successes. The fierce love of a mother when her children are under threat forms the basis of all of Mim’s actions throughout the novel. Her irrationality is entirely rational when viewed from a cornered and fearful mother’s perspective. I could only hope that I might be as brave as Mim if I ever found myself in the same situation.

Seriously, this is an excellent novel. There is an element of sustained dread maintained throughout that mounted towards the end, so expect to not be able to put this one down once you reach that point. The ending approaches fast and fierce, almost in a shocking manner, which really mimics the way it is for the characters as well. Ultimately, the novel finishes up on a hopeful note, although the underlying messages were definitely still ringing loudly in my ear. Compelling reading that I highly recommend to all.

Thanks is extended to Simon & Schuster Australia for providing me with a copy of The Mother Fault for review.

Kate Mildenhall is a writer and teacher. Her debut novel, Skylarking, was named in Readings Top Ten Fiction Books of 2016 and longlisted for Best Debut Fiction in The Indie Book Awards 2017 and the 2017 Voss Literary Prize. Kate teaches creative writing to young writers and co-hosts The First Time, a podcast about the first time you publish a book. The Mother Fault is her second novel. Kate lives with her partner and two daughters in Hurstbridge, Victoria.
Find out more about Kate at katemildenhall.com

18 thoughts on “Book Review: The Mother Fault by Kate Mildenhall”