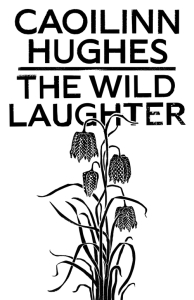 It’s 2008, and the Celtic Tiger has left devastation in its wake. For Hart and Cormac life continues as normal – at least at first. But when their father falls ill, the boys face a devastating choice. Their family, and their community, are in crisis, and there’s nothing more dangerous than two men with nothing to lose.

This bold, razor-sharp take on the consequences of one life-changing decision fizzes with the voice of rural Ireland. By turns outrageous, hilarious and dark, this is an unmissable snapshot of a family, and a nation, that finds itself suddenly unmoored. The Wild Laughter cements Caoilinn Hughes’s position as one of Ireland’s most audacious and talented young writers.

All the perks and perils of being a part of a family are unearthed within this darkly humorous and heartbreakingly poignant novel, played out against a back drop of a rural Ireland held fast within the grips of a massive recession. Hart might have been blessed with the looks in his family but he’s always lived in the shadow of his older brother Cormac – bigger, tougher, and cunningly smarter. For Cormac, college and beyond; for Hart, unemployment disguised as helping out on the farm, a life he neither asked for nor desires. But Cormac is a bully and a thug, and it suits him to be the big man out and about while his younger brother takes care of the home front.

‘Beneath the surface of my brother’s glassy expression was a smirk like a large trout that might surface fleetingly for a hatch of mayflies. Even if it didn’t, you could tell it was there all along: a dark, slithering scorn, full of small bones that somebody, someday, would swallow.’

Hard hit by the recession and swindled in a property development wrought, the family is barely holding it together financially when Chief (the father of the story) is cut down with what is presumed to be cancer – he doesn’t go for tests or treatments, partly because he can’t afford it (the money or the time away from the farm) and partly because there is little point: he’s dying anyway, why pay someone to tell him and prolong it. Here we see the true measure of Hart versus Cormac; Cormac stays away, turning up just enough to bask under his mother’s beam of adoration but not enough to actually contribute. Hart is there for everything; the work his father can’t do, the cleaning up his mother won’t do, and to witness the death of not just his father’s body, but his dignity. Over and over we see the many ways in which this man was brought low by an illness he was never going to survive. Hart’s love for his father was a beautiful but painful thing to regard.

‘The measure of love I had for him was not unlike the riz biscuits, in the awkward uncontainable way that made it wise to push the batch of it aside and start over for fear of being poisoned by too much swelling.’

I kept thinking that there was more to Nora, their mother, than what we were initially let in on. Depths that she perhaps was keeping contained, a painful past that had her stitched up. But in the end, I realised she was nothing more than who she was: a woman who would comfortably throw one son under the bus for the other if it meant for assurances of her own comfort and protection. If Hart was his father’s son then Cormac was his mother’s and this was evident over and above everything else. Nora’s strangeness wasn’t a front for hidden depths, she was just a strange woman full stop. Just as Cormac was a tosser through and through.

‘Right from the outset, from his first interview he’d been building his case … and it wasn’t against the People. Maybe he took it for granted I’d do the same: set myself against him. How far back had he contrived my incrimination?’

Perhaps this withholding of motherly affection and lack of normal mother-son interactions could account for the way in which Hart related to women. He seemed to always be straddling a violent line. It wasn’t explored too deeply, but the hint of it was enough to ground Hart as a character, take him down a peg or two lest we all become too enamoured with him. Likewise, the whole dog thing; the author was again reinforcing the flawed part of Hart’s character, giving us a reason to be repelled by him. And yet, in a way that only the best authors can achieve, these flaws only make you care for Hart more deeply by the end: the betrayed brother, the son cast out; the one to take the fall and bear the burden of his father’s choice because he was the only one pure enough, good enough, to do so.

‘Father Shaughnessy agreed that honesty was my biggest strength and my weakness. Too much honesty is incompatible with this world. It is water poured onto droughted soil. It can only spill off. The earth is too rigid in its poverty to absorb what wealth is given.’

For me, reading this novel was akin to watching waves breaking on the shore, the momentum building as you wade deeper, knowing that you will be in for a drenching but the shock of that final wave, once it at last hits, still managing to leave you shredded to pieces, despite all the warning signs guiding you to the finish.

Thanks is extended to Bloomsbury for providing me with a copy of The Wild Laughter for review.

Caoilinn Hughes is the author of Orchid & the Wasp (Oneworld 2018), which won the Collyer Bristow Prize, was shortlisted for the Hearst Big Book Awards and the Butler Literary Award, and longlisted for the Authors’Club Best First Novel Award and the International DUBLIN Literary Award 2020. For her short fiction, she won The Moth International Short Story Prize 2018 and an O. Henry Prize in 2019. Her poetry collection, Gathering Evidence (Carcanet 2014), won the Shine/ Strong Award. Her work has appeared in Granta, POETRY, Tin House, Best British Poetry, BBC Radio 3 and elsewhere. She has a PhD from Victoria University of Wellington, New Zealand, and she was recently Visiting Writer at Maastricht University in the Netherlands.

10 thoughts on “Book Review: The Wild Laughter by Caoilinn Hughes”