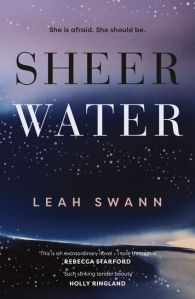 Emotional, powerful, unforgettable. From a stunning new literary talent, you won’t be able to put down this novel about a mother’s love for her children – it will break your heart.

Ava and her two young sons, Max and Teddy, are driving to their new home in Sheerwater, hopeful of making a fresh start in a new town, although Ava can’t help but keep looking over her shoulder. They’re almost at their destination when they witness a shocking accident – a light plane crashing in the field next to the road. Ava stops to help, but when she gets back to the car, she realises that somehow, among the smoke, fire and confusion, her sons have gone missing…

From a substantial new Australian writing talent, Sheerwater is tense, emotional, unforgettable. Perfect for readers of Mark Brandi’s Wimmera and Stephanie Bishop’s The Other Side of the World, this is a beautifully written, propulsive, gut-wrenching and unputdownable novel – an aching, powerful story of the heroic acts we are capable of in the name of love.

I really could have done with one more chapter to this novel. I didn’t need it, but I definitely wanted it. For reassurance. In my imagination, I am pushing for a couple of key outcomes, so I guess I’m just going to have to go with that. What a novel though! This is a powerful story, almost gentle in its brutality; quite a literary achievement.

Alternating between character perspectives, the novel spans only three days – three very intense days. The beginning of the sections that cover day two and day three are prefaced with a piece of writing about the shearwaters’ migration. Shearwaters are the most abundant seabird species in Australian waters and they are commonly known as the mutton-bird. It wasn’t until I reached the end of the novel that I realised that these two pieces of writing about the migration of the birds were in some way a premonition of what was next to come in the journey of the boys, Max and Teddy. Reaching that climatic part of the novel, towards the end, gave me goosebumps as my mind instantly reached back to the preface of day three. I even went back and re-read it, confirming my feelings about this correlation.

I feel as though this novel is a cautionary tale of an utterly preventable tragedy. When domestic violence meets mental illness there is never going to be a positive outcome, but I can’t help feel that there shouldn’t automatically always be a tragic one either. There were several instances throughout this story where I really felt enraged at the police. We have a woman here, whose two young children have gone missing while she is fleeing from their father. This couple are separated, but there is an intervention order against the husband, who is being treated for a mental illness, and there is a history of documented violence. That’s the scenario we have here. It’s all very clear, and while the husband attempted at every opportunity to rewrite the narrative, the facts really spoke for themselves. And yet, the woman in this scenario still gets asked a question like this by the detective investigating the disappearance of her children:

“Why did you marry someone like this, who tells lies, who makes you feel so unsafe that you get an intervention order taken out against him?”

This was just one of many questions that did nothing at all to aid in the investigation, and also did nothing at all to prevent the ultimate tragedy. Questions like this only serve one purpose: to victim blame. To change the narrative and put the responsibility of a grown man’s actions back onto his wife, who should what? Not try and protect herself and her children from harm in case it angers him? Not flee from her family home in terror because that’s ‘not fair’ to a father because ‘he’s a good guy just going through a rough patch’? Everything that happened within this novel was avoidable, and this is why we still have so far to go when it comes to preventing death from domestic violence within our society. This is a novel that taps into a crisis that exists within our country today. It’s very much a statement novel, but not in a gratuitous way. It was devastating, yet written with a beauty that seemed to paradoxically soften the blow while also remaining sharply on point.

I really loved Ava and was desperate for her to get the freedom for herself and her children that she so deserved. There was another character, Simon, who I also really liked. He was going through his own issues and was pulled into what was happening with Ava merely by chance and proximity. He seemed to be a ‘seer’ or perhaps just highly intuitive, I’m not sure, but this aspect of his persona appealed to me greatly. In my imagination, there is more for Simon and Ava, beyond the pain.

Sheerwater is a novel that will leave an impression upon anyone who reads it. I have a feeling I will be seeing more about this novel within the next year, perhaps listed for prizes. I don’t often get hunches like that, but the last time I did was after I read The Natural Way of Things by Charlotte Wood, and we all know how that turned out!

Thanks is extended to HarperCollins Publishers Australia for providing me with a NetGalley copy of Sheerwater for review.

Leah Swann is an award-winning author and journalist currently employed at World Vision Australia as the CEO’s chief speech writer. Her critically acclaimed collection of stories, Bearings, was published by Affirm in 2011. Her fantasy series for middle grade readers, Irina: The Trilogy, was published by Xoum between 2012 and 2015, with some young readers calling it ‘the best book since Harry Potter’. Swann was the inaugural first place winner of the Overland Story Wine prize for her story That Inward Eye. Swann’s literary fiction, poetry and essays have been published in Meanjin, The Best Australian Stories, The World To Come, Australian Love Stories, Award Winning Australian Writing, page seventeen, Review of Australian Fiction, Australian Country Style, Reflecting on Melbourne, and The Glasgow Herald.