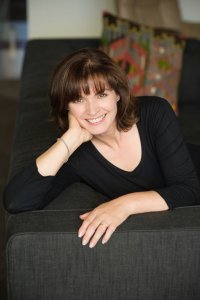 I am thrilled to welcome Fiona McIntosh as my guest for Behind the Pen today. To publish an interview with one of my favourite authors is such an honour and I’m incredibly grateful to Fiona for taking time out of her book tour to indulge me. Over to you, Fiona…

What provided the initial inspiration for The Pearl Thief?

I always begin with place and once I settled on Prague, my mind helplessly roamed to arguably its most painful part of history, which was the Occupation that was part of the early series of aggressions by the Germans that began WWII. And once you’re in that timeline, in a country that was Occupied, it is hard to ignore the plight of the Jewish people. And so I put it all together in my mind that it would be a survivor who escapes the German clutch and belongs to an aristocratic Czech Jew family. I needed something that would kick the modern part of the story into action and decided a magnificent piece of jewellery would form the impetus. The fabulous pearls so resonant in The Pearl Thief came from a visit to the British Museum many years ago where I saw an incredible piece of jewellery from the early middle ages. It was in solid, articulated gold and could well have been a Viking piece. While I never forgot it, over the years my recall of it dulled and I was convinced it was a single strand of magnificent pearls. The Museum spent hours looking for it and was as baffled as I until we discovered my error to much laughter. Nevertheless, the extraordinary piece remained as perfect, massive pearls in my mind and I decided they were Ottoman, given to a favourite odalisque of the Murad who later made her his first and most important wife. I then built a provenance around this piece of how it travelled from Constantinople in the twelfth century to Russia and later into Eastern Europe finding its way into an aristocratic Jewish family. It was fun creating that fiction alone.

What is your favourite character from The Pearl Thief and why?

Without doubt it’s Katerina. For the first time in my writing career a character arrived into my mind whole. She tapped me on the shoulder while I was researching in Prague and I knew her. I knew everything about her in that moment; how she looked, sounded, her mannerisms, her fashion and tastes. Most importantly, I could touch her fragility and damage. She was a marvellous character to work with.

What is your favourite scene from The Pearl Thief and why?

I don’t know if it’s my favourite scene but I do believe the prologue is vital and sets the tone and undercurrent for the story and was hugely emotional to research and even more powerful to write. There is another scene that is harrowing and writing it was a massive challenge to keep it respectful to the reader who doesn’t know it’s coming and yet ensuring it is full of rage and oxygen and sufficient horror to lay the base for my main character’s damage and decision to turn around and face her demons. This is the story of a survivor so it needs this powerful scene that shreds at one’s emotions. It tormented me to write it but I like it from the point of view that it demanded and found the very best of me to craft it.

I love the scene when Katerina finds her own power within and there’s a killer line when she explains to another character her intention. It’s extremely uplifting and sets the story on a new course.

As you can see, too many scenes to single one out. If I’m pressed for absolute favourite because it brought me pure pleasure to include and to write, then it’s Katerina at Robin Hood’s Bay meeting a character again and I believe it’s one all the readers will love because it gives them a chance to sigh out their tension and worry for her. However, her real adventure is only just beginning but this chapter offers a marvellous release…just for a brief time. 😊

How would you describe The Pearl Thief if you could only use 5 words?

Given all of the research you undertake for each novel, is it difficult to balance the demands of getting the facts right with telling a good story?

No, that’s the challenge. It’s everything I aspire towards and never…ever … do I lose sight that I am crafting a story that must entertain the reader and keep readers turning the pages into the early hours.

How much planning do you do at the beginning of each novel? Do you plan/plot the entire story from beginning to end, or let it evolve naturally as the writing progresses? In terms of characters, are they already a firm picture in your mind before you start writing or do they develop a personality of their own as the story progresses?

I have never planned any of my books. I write on pure emotion and the feelings I experienced while researching. Every story is organic and builds itself day by day. The characters arrive in their own time. They usually arrive a bit ghostly and then begin to coalesce into more tangible people to walk with but Katerina arrived whole, as I explained but can’t explain why. 😊

Do you have a favourite historical era?

I love working with the years between 1910 and 1945. I feel comfortable in those decades and there’s so much scope within them for dramatic storytelling.

No, I’m super disciplined. I never write away from my desk. I never write while researching or travelling. I am always grounded in the familiar spot. That spot has changed over my career – the desk has been in a shed in Adelaide, a table in Tasmania, upstairs in a small office in Adelaide overlooking rooftops, in my pantry in Adelaide and now more recently in a tiny nook in my kitchen at Riverton surrounded by cookbooks, my coffee machine and ovens usually with a cake baking. I write at the same time of the day four days per week for roughly three hours. And then I stop…I feel the quality could drop off for me after that high concentration for that space of time.

From following you on Facebook, I know you love to bake and cook. Do you have a favourite set of comfort foods you regularly whip up or are you more of an experimental chef?

I’m a family cook so we have family signature dishes that are always being requested. We are all sweet tooths so cakes and desserts are high on the agenda for my family and do consider myself as a home cook who leans towards the cakes, pastries, pies, ice creams, biscuits, puds, etc. I am always searching and trialling new baking recipes. The present one on my list to trial is a white velvet cake as a potential contender for a wedding cake for the family’s next big event. However, I am happiest in my kitchen cooking honest, no fuss, delicious, meals with wholesome ingredients and all from scratch using as much from our garden as possible. If I could we’d all go 100% vegetarian but we are close enough now so I’m comfy that we’re doing our bit to be highly aware of what we eat and sourcing humane meat when it’s served from my kitchen. Two of us are declared flexitarians that choose to eat mostly vegetables and only eat meat if we’re cornered or need some iron.

What authors and types of books do you love the most?

I’m a sucker for a good thriller and I’m sweating on the new Terry Hayes that has been promised for years! I choose to read crime and thrillers for leisure because it’s a wonderful change up from what I am writing. I enjoy Robert Harris, John Connolly, Ken Follett, Le Carré, Stephen King (not his horror) and a host of other writers of adventuresome tales that lead into the darker world of crime and suspense.
Plus, I read Ian McEwan as my hair shirt. He is my gaoler and torturer, showing me time and again how far I yet have to go! 😊

Severine Kassel is asked by the Louvre in 1963 to aid the British Museum with curating its antique jewellery, her specialty. Her London colleagues find her distant and mysterious, her cool beauty the topic of conversations around its quiet halls. No one could imagine that she is a desperately damaged woman, hiding her trauma behind her chic, French image.

It is only when some dramatic Byzantine pearls are loaned to the Museum that Severine’s poise is dashed and the tightly controlled life she’s built around herself is shattered. Her shocking revelation of their provenance sets off a frenzied hunt for Nazi Ruda Mayek.

Mossad’s interest is triggered and one of its most skilled agents comes out of retirement to join the hunt, while the one person who can help Severine – the solicitor handling the pearls – is bound by client confidentiality. As she follows Mayek’s trail, there is still one lifelong secret for her to reveal – and one for her to discover.

From the snowy woodlands outside Prague to the Tuileries of Paris and the heather-covered moors of Yorkshire comes a confronting and heart-stopping novel that explores whether love and hope can ever overpower atrocity in a time of war and hate.

Thanks is extended to Penguin Random House Australia for providing me with a copy of The Pearl Thief for publicity and review.

8 thoughts on “Behind the Pen with Fiona McIntosh”