Time is the Longest Distance… 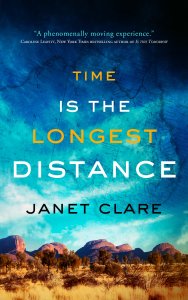 Set in the harsh desert of the Australian outback, Time Is the Longest Distance is a moral story of immorality in a place where “night comes on like a door slamming shut.”

Lilly, a 45-year-old New Yorker, is persuaded by her newly-found father, Cameron, to take on the Canning Stock Route, the most difficult outback track in the country. Crossing the dead heart of the Great Sandy and Gibson deserts, she is joined by her half-brother, Grant, and his twenty-something daughter, Jen.

Like a moon walker far from her life, Lilly becomes entangled in an unlikely love affair and a witness to an unsavoury death. The hard days and long nights provide time and space for Lilly to recall the years with her ex-husband, Stephen, artist and all-around drunk—the greatest love and disappointment in her life—forcing her to examine her own imperfections as she learns, first-hand, about the power and destruction of secrets, sexual taboos, and the thrill of transgression.

It is with mixed feelings that I write up this review of Time is the Longest Distance. I was immediately drawn into this novel, at ease with the main character, Lilly, and full of empathy for her predicament. To be told at the age of forty five that you aren’t who you always thought you were would tip even the most hardy of us off balance. Lilly already seemed a little lost within her own life, somewhat ill at ease within her relationship, as well as within her own family. That she decided to trek to Australia to meet her birth father seemed a logical step for her to take at such a fraught time.

‘The isolation here is staggering, like the magnificent desolation of distant planets.’

Now, this is where the story seemed to veer off course for me. Lilly’s father was an extremely unlikable man, yet Lilly agreed to a trip across the desert with him. I might have been more convinced of the wisdom of this journey if there had been some promising beginning to their relationship, but there really wasn’t much beyond recrimination hanging in the air between them. Accompanying them was Grant and Jen, Lilly’s newfound half-brother and his daughter. Things get very ‘Flowers in the Attic’ from here on in, and quite frankly, it was weird and the less said about this, the better. Nothing improves between Lilly and her father, at all, and the culmination of this trajectory had a shock value that didn’t sit at ease within the story. It sort of just made the entire preceding journey through the outback, and even the initial trip to Australia, particularly pointless. Another aspect of this Australian part of the story that didn’t sit well with me was the depiction of indigenous Australians. It was flawed and slanted towards misrepresentation and I don’t feel it added any authenticity to the story.

So here you have my ‘two minds’. The Australian part of the story repelled me entirely, but the bookends to this appealed greatly. I don’t think a novel has split my thinking quite so much as what this one has. There is no denying the eloquent hand that Janet Clare applies to her writing. I particularly enjoyed Lilly’s reflections on her marriage and the introspective examination on the loss of Stephen’s presence within her life. I had expected this to play a greater part in the novel but with the shift in focus it ended up on the backburner for a good while before popping up again at the end in a rather character defining moment for Lilly. My liking for this novel ebbed and flowed, but I kept on reading, driven by my initial impressions. I’m giving a split rating to this one.

‘I looked over the sea of suits and thought of all the years I’d attached my success to the man I loved. History was littered with women who had given up their desires for the so-called greater good, the better artist. Sometimes though, you lost it all. Your own dreams and those you shared.’

Thanks is extended to the author for providing me with a copy of Time is the Longest Distance for review.

Originally from New York, Janet Clare lives in Los Angeles with her husband and a small dog named for the town of Lucca, Italy. She studied at UC Berkeley and UCLA, and has had short fiction and essays published online and anthologized. Time Is The Longest Distance is her first novel.