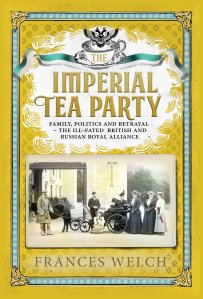 Written with Frances Welch’s famously waspish eye for detail, this is another fascinating, percipient, revelatory and often quite hilariously funny book from the master of Russian history.

Russia and Britain were never natural bedfellows. But the marriage, in 1894, of Queen Victoria’s favourite granddaughter, Alicky, to the Tsarevich Nicholas marked the beginning of an uneasy Anglo-Russian entente that would last until the Russian Revolution of 1917.

As Frances Welch recounts in her inimitable wry style, the three extraordinary meetings that took place during those years, although well-intentioned and generally hailed as successes, were beset by misunderstandings and misfortunes. Whether it was the Romanovs suffering the draughty rooms and wet hunting expeditions at Balmoral, or Queen Victoria complaining about the food on her first and only state visit to the Russian Empire at the port of Revel, or everyone succumbing to seasickness on arrival at Osbourne House on the Isle of Wight.

The two families could not know, as they waved each other fond goodbyes from their yachts at Cowes in 1909, that they would never meet again. King George infamously denied his Romanov cousins exile in Britain when the Bolsheviks were closing in in 1917, but the assassination of the Tsar and his family horrified him, and whether or not things might have turned out differently if he had accepted their plea for refuge has been the subject of speculation ever since.

The British and Russian Royal Families met three times before the Romanovs’ tragic end in 1918. The Imperial Tea Party draws back the curtain on those pivotal encounters between these two great dynasties; encounters that had far reaching consequences for 19th century Europe and beyond.

My endless fascination with Queen Victoria initially prompted my interest in this book, although of course, given the date ranges of the book, Queen Victoria is only in the first section, because spoiler alert, she died in 1901 and this book still had another 17 years left. My interest waned after this, despite Alicky being Queen Victoria’s favourite granddaughter. She lacked the spark of her grandmother and the author gave the impression of a dour woman who struggled to find favour with very much at all. My interest did pick up again in the last thirty pages which detailed the demise and eventual tragic assassination of the Romanov family, along with insight into their supposed betrayal by King George.

This book veered from being heavily political to lightly mundane, never really settling into any space in between, although it had a unique gossipy feel to the writing that conveyed a polished knowledge of the subject matter by the author. You absolutely cannot fault the detailed research and there are many photographs and primary sources such as letters and menus included which made for fascinating perusal. As a resource for expanding your knowledge on the Russian-British royal relations from 1894 through to 1918, this would prove to be a very useful book indeed.

Thanks is extended to Allen and Unwin for providing me with a copy of The Imperial Tea Party for review.

Frances Welch is the author of Rasputin(2014), The Russian Court at Sea (2011), Romanov Fantasy (2008) and Sydney Gibbes: Tutor to the Children of the Last Tsar (2004), all published by Short Books. Frances Welch has written for the Sunday Telegraph, Granta, The Spectator and the Financial Times. She lives in Aldeburgh, Suffolk.