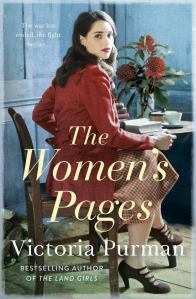 From the bestselling author of The Land Girls comes a beautifully realised novel that speaks to the true history and real experiences of post-war Australian women.

The war is over and so are the jobs (and freedoms) of tens of thousands of Australian women. The armaments factories are making washing machines instead of bullets and war correspondent Tilly Galloway has hung up her uniform and been forced to work on the women’s pages of her newspaper – the only job available to her – where she struggles to write advice on fashion and make-up.

As Sydney swells with returning servicemen and the city bustles back to post-war life, Tilly finds her world is anything but normal. As she desperately waits for word of her prisoner-of-war husband, she begins to research stories about the lives of the underpaid and overworked women who live in her own city. Those whose war service has been overlooked; the freedom and independence of their war lives lost to them.

Meanwhile Tilly’s waterside worker father is on strike, and her best friend Mary is struggling to cope with the stranger her own husband has become since being liberated from Changi a broken man. As strikes rip the country apart and the news from abroad causes despair, matters build to a heart-rending crescendo. Tilly realises that for her the war may have ended, but the fight is just beginning.

Victoria Purman has really carved a niche out for herself, crafting engaging and quality stories about life in Australia during the mid-20th century. Her novels have a lot of social history woven into them, all the details about life, small and large, that create an atmosphere akin to stepping back in time.

The Women’s Pages covers a lot of ground and touches on a lot of issues. It’s quite a long novel too and I felt it wore its research a bit too heavily in the first half, likewise, it dove frequently into backstories, at times mid conversation, resulting in an adverse effect on the flow of the narrative. I struggled to pin down the actual story for a good portion of the first part of the novel. I did find this ease though once I was into the second half and I was a lot more engaged with the characters and their stories from then on.

As a qualified journalist myself, I found Tilly’s working life and everything to do with the reporting of the war utterly fascinating. That was the real winning storyline for me within this novel. What women have had to put up with, it defies belief. The loss of life from WWII, the POWs, the PTSD, the way in which wives and widows were treated post war; Victoria Purman paints a vivid picture of Australia within that era. Recommended reading for anyone with an interest in post-war Australian social history.

Thanks is extended to Harper Collins Publishers for providing me with a copy of The Women’s Pages for review.

Victoria Purman is an Australian top ten and USA Today bestselling fiction author. Her most recent bestseller, The Land Girls, was published in April 2019. The Last of the Bonegilla Girls, a novel based on her mother’s post-war migration to Australia, was published in 2018. Her previous novel The Three Miss Allens became a USA Today bestseller in April 2019. She is a regular guest at writers festivals, a mentor and workshop presenter and was a judge in the fiction category for the 2018 Adelaide Festival Awards for Literature.
To find out more, visit Victoria on her website.

2 thoughts on “Book Review: The Women’s Pages by Victoria Purman”