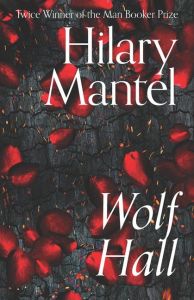 England, the 1520s. Henry VIII is on the throne, but has no heir. Cardinal Wolsey is his chief advisor, charged with securing the divorce the pope refuses to grant. Into this atmosphere of distrust and need comes Thomas Cromwell, first as Wolsey’s clerk, and later his successor.

Cromwell is a wholly original man: the son of a brutal blacksmith, a political genius, a briber, a charmer, a bully, a man with a delicate and deadly expertise in manipulating people and events. Ruthless in pursuit of his own interests, he is as ambitious in his wider politics as he is for himself. His reforming agenda is carried out in the grip of a self-interested parliament and a king who fluctuates between romantic passions and murderous rages.

From one of our finest living writers, Wolf Hall is that very rare thing: a truly great English novel, one that explores the intersection of individual psychology and wider politics. With a vast array of characters, and richly overflowing with incident, it peels back history to show us Tudor England as a half-made society, moulding itself with great passion and suffering and courage.

I was daunted by this novel from the outset and this never really receded even whilst reading; it’s taken me three weeks to get through it, in fits and bursts, so that in itself is indicative of my experience. It’s not only on the long side of long, but it’s dense with history, politics, details upon details about people who all seemed to be only ever called one of six names. I’m certain that I’d have had no idea what was going on at all if I weren’t familiar with Tudor, and even Plantagenet, English history. And yet, I never once considered abandoning it. What is it about this novel, that was all at once both compelling and daunting in equal measure? The further into it I got, the more it gripped me, even though I was still manically checking and double checking the table of contents just in case I was mistaken that there were still eighty pages of tiny print left in the chapter! This novel is a beast, of both burden and glory, and even after reaching the end – at last! – I was compelled to pick up Bring Up the Bodies immediately, so that I could keep reading about these historical figures whose fate I am already familiar with. I guess this is why Hilary Mantel has won the Man Booker twice now, with a third listing just announced for The Mirror and the Light. Before we go on though, I resisted starting the next one; I need a break from this level of absorbed reading, but it is on hand for when I’m ready to tackle the next instalment.

‘You learn nothing about men by snubbing them and crushing their pride. You must ask them what it is they can do in this world, that they alone can do.’

My feelings about Cromwell prior to reading Wolf Hall were not positive. I had him pegged as a parasitic, greedy, power hungry, manipulator. Mantel’s Cromwell is much more dimensional than that. He is clever, cunning and brutal, a survivor who has raised himself up in ways that not many could have. His talents are many, his foresight and ability to make himself indispensable second to none. What caught me by surprise was his loyalty and decency, traits that I expected him to be devoid of. Particularly with regards to his family and household, and indeed, it was during his interactions with these people whom he lived and worked closest with that the novel was at its finest. There was humour, warmth, affection, and respect shown throughout Cromwell’s household that was progressive for the times. Mantel has certainly given us all a complex man to become invested in. A villain that has had his villainy reshaped and presented in a much more appealing, and human, way. He would have to be, wouldn’t he, to sustain reader investment over three very long books.

‘What he senses is a great net is spreading about him, a web of favours done and favours received. Those who want access to the king expect to pay for it, and no one has better access than he. And at the same time, the word is out: help Cromwell and he will help you. Be loyal, be diligent, be intelligent on his behalf; you will come into a reward. Those who commit their service to him will be promoted and protected. He is a good friend and master; this is said of him everywhere.’

Mantel has created an entire world within this novel, one that is atmospheric in the most finite of detail. There is both big history and small history woven through the narrative. Less a story about King Henry VIII and more a story about England during his reign. The separation from Catholicism and the Vatican, the quest to assert dominance over its own wealth, the volatility of Scotland and Ireland; and yes, the whims of a king determined to fight fate by making his own rules. It’s all very gripping and compelling, written with a style that is engaging and intelligent, as well as clearly informed. You’ll probably get no better, or more entertaining, history lesson on this era than from the pages of this novel, and the following two, no doubt. The challenge this novel posed was worth overcoming in the end. It may be some time before I’ve finished the trilogy entirely, but it will happen. I’d like to see where Mantel takes us, despite knowing the end point in advance.

Hilary Mantel is the author of fourteen books, including A Place Of Greater Safety, Beyond Black, the memoir Giving Up The Ghost, and the short-story collection The Assassination Of Margaret Thatcher. Her two most recent novels, Wolf Hall and its sequel Bring Up The Bodies, have both been awarded the Man Booker Prize – an unprecedented achievement.