The Pull of the Stars…

In an Ireland doubly ravaged by war and disease, Nurse Julia Power works at an understaffed hospital in the city centre, where expectant mothers who have come down with an unfamiliar Flu are quarantined together. Into Julia’s regimented world step two outsiders: Doctor Kathleen Lynn, on the run from the police, and a young volunteer helper, Bridie Sweeney.

In the darkness and intensity of this tiny ward, over three days, these women change each other’s lives in unexpected ways. They lose patients to this baffling pandemic, but they also shepherd new life into a fearful world. With tireless tenderness and humanity, carers and mothers alike somehow do their impossible work.

I never thought I’d read a novel about an historical pandemic whilst living within a contemporary one. But, never say never, and if you’re inclined to shy away from this one because it’s just all too much at present, I don’t blame you, but you will be missing out. This is a magnificent novel in its own right, but reading it now, whilst our world is in the grips of pandemic, was an offering of context like no other. The influenza pandemic of 1918 killed more people than WWI, an estimated three to six percent of the human race (Author note). The Pull of the Stars is set in Dublin, at the beginnings of the pandemic. It unfolds over three days within the maternity fever ward of a Dublin hospital and is narrated by a nursing midwife who has been put in charge of the ward and is expected to run it solo, after all, resources and people are stretched thin; a pandemic is raging. However, when you combine the later stages of pregnancy with a deadly flu, managing a ward of three patients is not as easy as it may seem.

‘Always on their feet, these Dublin mothers, scrimping and dishing up for their misters and chisellers, living off the scraps left on plates and gallons of weak black tea. The slums in which they somehow contrived to live were as pertinent as pulse or respiration rate, it seemed to me, but only medical observations were permitted on a chart. So instead of poverty I wrote malnourishment or debility. As code for too many pregnancies I might put anaemia, heart strain, bad back, brittle bones, varicose veins, low spirits, incontinence, fistula, torn cervix, or uterine prolapse. There was a saying I’d heard from several patients that struck a chill into my bones: She doesn’t love him unless she gives him twelve. In other countries, I’d heard women might take discreet measures, but in Ireland such things were not only illegal but unmentionable.’

This a novel about nursing, midwifery, the dangers of childbearing, a deadly influenza pandemic, WWI, the state of Ireland in the early twentieth century – both politically and socially, and, above all, humanity and our will to survive even the darkest of times. As is the way with Emma Donoghue, the devil is in the detail. So much is explored within this novel, and as detailed in the author note, all is based on historical fact. It’s not a cheery read, and at times it’s confronting and devastating, but it’s just so beautifully written, a sorrowful symphony of truth and history that is incredibly insightful and so very relevant today; possibly even more so than the author intended, given that she could not have foreseen that this novel would be released in the midst of a global pandemic of the likes she had written about.

‘All these autopsies being industriously performed all over the world, and just about the sum of what we know about this wretched influenza is that it takes about two days to incubate.
Aren’t we any closer to a vaccine, then?
She shook her head and her loose braid leapt. Until one of us manages to spot the bacterium itself on a slide… If one doesn’t know the enemy, how can one beat him? All rather humbling, she added bitterly. Here we are in the golden age of medicine– making such great strides against malaria, anthrax, rabies, diphtheria, tetanus– and a common-or-garden grip is beating us hollow.’

‘We could always blame the stars.
I beg your pardon, Doctor?
That’s what influenza means: influenza delle stelle–the influence of the stars. Medieval Italians thought the illness proved the sky must be governing their fates, that they were quite literally star-crossed.
I pictured that: the heavenly bodies trying to fly us like upside-down kites. Or perhaps just yanking on us for their obscure amusement.’

No historical novel about Ireland can ignore the political state of the day, and this is woven quite meticulously into the narrative. Doctor Lynn was an interesting character, a protestant member of Sinn Féin (Sinn Féin is a democratic socialist and left-wing party, not a Catholic one, despite misconceptions that have been fuelled over time), and she is based on an incredible real woman of the same name. I enjoyed the conversations she had with Julia (the main character) and the way in which Julia then began to unpick her notions about ‘the rebels’ and who they were and what they were trying to achieve. This relationship offers so much insight into the dangers of assumption, particularly when it is based on an outside, media driven, government propagandist view. As Doctor Lynn expressed more of her views as they got to know each other, Julia couldn’t help but come to the conclusion that she shared them.

‘Tears prickled behind my eyes. I said, I just don’t understand how a physician could have turned to the gun. Nearly five hundred people died.
She didn’t sound offended. Here’s the thing, my dear: they die anyway, from poverty rather than bullets. The way this poor island’s misgoverned, it’s mass murder by degrees. If we stand by, none of us will have clean hands.
My head was spinning. I said, faltering: I really have no time for politics.
Oh, but everything’s politics.’

Throughout the novel, health notices from the day are reproduced, ones that were distributed by the government with instructions on how to stay safe from the deadly flu. I’ve included these two for you as an example (pictured) – the first one has some echoes of familiarity, apart from the kissing through handkerchiefs and sprinkling sulphur in your shoes! – but others were quite outlandish, ranging from eating an onion a day to carrying crushed garlic in your pockets. As a health professional, Julia was somewhat scathing towards them, resenting the misinformation and feeling that they were in many ways contributing to the spread of the virus by ignoring the impact of poverty on hygiene and distancing and focusing instead on making individuals responsible without offering them a means of being able to take the reins of that responsibility. 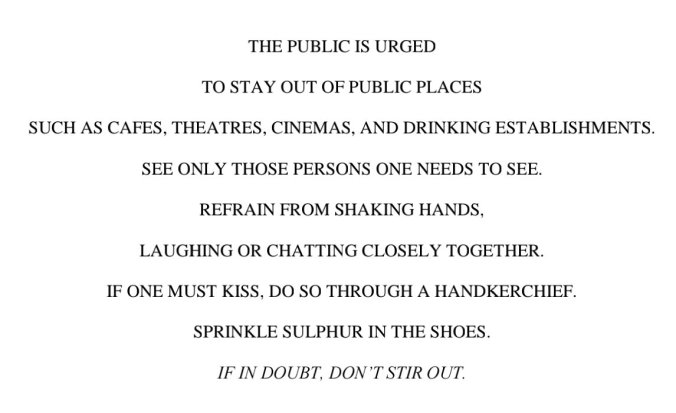 ‘On the landing, yesterday’s poster hooked my attention: Would they be dead if they’d stayed in bed? I had an impulse to rip it down, but that probably constituted conduct unbecoming to a nurse, as well as treason. Yes, they’d be bloody dead, I ranted inside my head. Dead in their beds or at their kitchen tables eating their onion a day. Dead on the tram, falling down in the street, whenever the bone man happened to catch up with them. Blame the germs, the Germans, the Lord God Almighty, the unburied corpses, the dust of war, the random circulation of wind and weather. Blame the stars. Just don’t blame the dead, because none of them had wished this on themselves.’

I haven’t even come near to covering everything this novel offers, but hopefully I’ve given you enough to want to find out all the rest for yourself. It really is a brilliant read, one that will stay with me for a long time.

Thanks is extended to Pan Macmillan for providing me with a copy of The Pull of the Stars for review.

Born in Dublin in 1969, Emma Donoghue is an Irish emigrant twice over: she spent eight years in Cambridge, England, before moving to Canada’s London, Ontario. She is best known for her novels, which range from the historical (The Wonder, Slammerkin, Life Mask, The Sealed Letter) to the contemporary (Akin, Stir-Fry, Hood, Landing). Her international bestseller Room was a New York Times Best Book of 2010 and was a finalist for the Man Booker, Commonwealth, and Orange Prizes; her screen adaptation, directed by Lenny Abrahamson, was nominated for four Academy Awards.

10 thoughts on “Book Review: The Pull of the Stars by Emma Donoghue”