In 2016, fleeing London with a broken heart, Alexandra returns to Australia to be with her grandparents, Romy and Wilhelm, when her grandfather is dying. With only weeks left together, her grandparents begin to reveal the family mysteries they have kept secret for more than half a century. In 1939, two young girls meet in Shanghai, the ‘Paris of the East’: beautiful local Li and Viennese refugee Romy form a fierce friendship. But the deepening shadows of World War Two fall over the women as Li and Romy slip between the city’s glamorous French Concession and the desperate Shanghai Ghetto. Eventually, they are forced separate ways as Romy doubts Li’s loyalties. After Wilhelm dies, Alexandra flies to Shanghai, determined to trace her grandparents’ past. As she peels back the layers of their hidden lives, she begins to question everything she knows about her family – and herself. A gorgeously told tale of female friendship, the price of love, and the power of hardship and courage to shape us all. 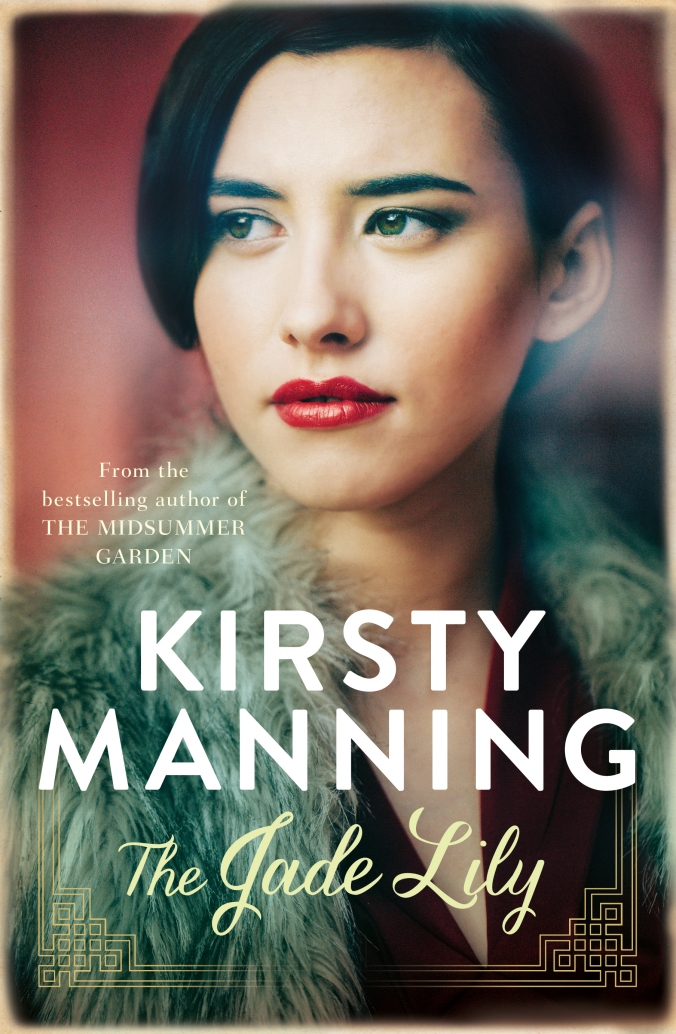 The Jade Lily is Australian author Kirsty Manning’s second novel, but it is my first experience of her talent. I’ve read a lot of WWII fiction but my choices have been predominately set in Europe. Even though I have studied WWII history, my knowledge of the war in the Pacific is still more limited than what I know of Europe, so reading this novel set in Shanghai over the war years was an enlightening experience. I had no idea, for example, that Shanghai had opened its borders to Jewish refugees prior to 1940. They didn’t even need a visa. The cultural history documented within this novel is incredible, providing an eye opening atmospheric journey that is second to none. Shanghai must have been one of the most multi-cultural cities in the world at that point in time.

Kirsty has taken a period of time in history and carved her story into a setting that is quite significant in Jewish history. One thing that was so apparent to me while reading The Jade Lily was the absolute extent of human suffering throughout WWII on a global scale. Stories like this are grounding, they reinforce the importance of humanity uniting and persevering in the pledge for peace. There is a scene towards the end of The Jade Lily where the US are bombing the Jewish ghetto and everyone bands together to dig people out and provide assistance: Jewish, Chinese, the Japanese soldiers; everyone is united with a single purpose and that shining example of humanity in action brought me to tears. Within such devastation, hope exists.

“Everywhere she looked, Chinese, Jewish and Japanese people were working frantically together to free or resuscitate victims.”

I really feel Kirsty provided a balanced account of the occupation of Shanghai demonstrating on many occasions how the Japanese soldiers were not all brutal; some were, but some were understanding and sympathetic, a cross section that is not dissimilar to the rest of the population. The authenticity of this representation was something I appreciated immensely. Sometimes, good people are forced to do bad things to survive. Shades of grey permeate so many areas for so many people and in times of war the rules are constantly shifting. Kirsty demonstrated this with precision for all of her characters and this human fallibility assures this novel has a presence in my list of top WWII fiction titles.

Both storylines in each era were equally as engaging, but their close link ensured that you never felt as though you were reading two separate stories, a juggle that is ever present for writers of dual timelines. Shanghai in the WWII era was just as vibrant on the page as present day Shanghai and I loved how Alexandra visited places and noted the changes for her grandmother. There is a lot about Chinese medicine in this story and I personally found all of it fascinating. It’s a type of medicine I have dabbled with in terms of treatment and I was keenly interested in the scope and integrity of it from a Chinese perspective. Themes of love and honour were woven through the narrative, the endurance of family bonds and strong friendships, of protecting your loved ones even if it compromises your integrity. I loved so much about this novel, I read late into the night past midnight even though I had to go to work the next day because I couldn’t bear to put it down. It’s definitely a top read for me, a highlight of my reading year so far.

“To live, when those you love are dead, is a cruel, bitter luck.”

Thanks is extended to Allen and Unwin for providing me with a copy of The Jade Lily for review.

Kirsty Manning grew up in northern New South Wales. A country girl with wanderlust, her travels and studies have taken her through most of Europe, the east and west coasts of the United States and pockets of Asia. Kirsty’s first novel was the enchanting The Midsummer Garden published in 2017. The Jade Lily, compelling and pacey, is her second book. Kirsty is a partner in the award-winning Melbourne wine bar Bellota, and the Prince Wine Store in Sydney and Melbourne. She lives with her husband and three children amid an old chestnut grove in the Macedon Ranges, Victoria.