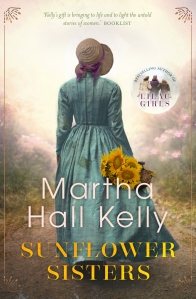 Inspired by true accounts, Sunflower Sisters provides a vivid look at the Civil War experience, from the barbaric and inhumane plantations, to a war-torn New York City to the horrors of the battlefield.

From the author of the million-copy global bestseller Lilac Girls, comes a captivating new historical novel, set during the American Civil War.

Georgeanne Woolsey isn’t meant for the world of lavish parties and demure attitudes. So when civil war ignites the nation, she follows her passion for nursing during a time when doctors considered women a bother on the battlefront. She and her sister Eliza venture from New York to Washington, D.C. to Gettysburg, and while involved in the war effort witness firsthand the unparalleled horrors of slavery.

In the South, Jemma is enslaved on the Peeler Plantation, while her sister, Patience, is enslaved on the property next door. Both live in fear of LeBaron, an abusive overseer who tracks their every move. When Jemma is sold by the cruel Anne-May just as the Union Army comes through, she sees a chance to escape – but only by abandoning those she loves.

Anne-May is forced to run the Peeler Plantation when her husband joins the Union Army and her brother enlists with the Confederates. Now in charge, she uses the opportunity to follow her own ambitions and is drawn into a secret Southern network of spies.

Inspired by true accounts, Sunflower Sisters is a sweeping story of women caught in a country on the brink of collapse, in a society grappling with nationalism and unthinkable racial cruelty.

Sunflower Sisters is the third and final instalment in a series that follows an actual real life family, that of Caroline Woolsey Ferriday, an American philanthropist known for her efforts during WWII and the period after. The series moves back through generations, each book set during a different war (WWII, WWI, and now, the American Civil War). I haven’t read the first two novels, Lilac Girls and Lost Roses, but I didn’t find this impeded my enjoyment in any way, many other reviews indicating that all three books can be read as a standalone.

‘Just when we thought we’d witnessed the very worst, a new dear man would arrive on a stretcher, half his face shot away or his bowels exposed, trying his best to be stoic and not cry out. Chronic dysentery and diarrhoea were the meanest killers, taking the most men by far.’

Sunflower Sisters is an American Civil War novel. It’s expansive and immersive, told from three distinctly strong female perspectives: a war nurse, a plantation slave, and a slave owner. The novel is largely based on fact and much of the story is drawn from letters written by the real Woolsey family throughout the civil war. It was a pleasure to read such a meticulously researched novel, one that was so embedded with actual history.

‘It’s hard not to love the Woolsey women, strong and determined. As Jane Stuart Woolsey wrote in her book, Hospital Days, Reminiscence of a Civil War Nurse, “When members of the Woolsey family gave up toys, they took up politics. Brought up by a mother who hated slavery, although her ancestors for generations had been Virginia slave-holders, they walked with her in the straight path of abolitionism.”’ – Author’s note.

Sunflower Sisters is less Gone With the Wind and more Cold Mountain. There is an honesty and brutality to it that does its subject matter justice. Some scenes were shocking, as was their intent, but never seemed exaggerated or gratuitous, rather, a representation of events as they would have unfolded, sans the sugar coating. I highly recommend reading the author note at the end which details just how extensive the research process behind writing this book was. I was left with the impression that it was a labour of love.

‘Turns out the mobs did more than burn the orphans’ home to the ground, they sacked the whole city. They cast paving stones through shop windows, cut telegraph lines, killed the horses that pulled streetcars, and ruined the cars. Georgeanna read me the papers that said the ruffians hunted coloured people on the streets and viciously beat and murdered them. They burned the mayor’s home, hotels, and newspaper offices, and when the rioters approached the offices of The New York Times, the staff turned Gatling guns on the mob, dispersing them. They kept at it for days, until over one hundred coloured folks died, eleven of them murdered by hanging.’

Sunflower Sisters is quite a long novel and the narrative at times is minutely detailed but it’s definitely worth the investment of reading time. It’s incredibly atmospheric and the characterisation is brilliantly realised, with authenticity and impact. If you have read the first two books in the series, then you’ve no doubt been highly anticipating this final instalment, which will not disappoint. I fully intend on reading the other novels now after immensely enjoying this introduction to the work of Martha Hall Kelly.

Thanks is extended to Penguin Random House for providing me with a copy of Sunflower Sisters for review.

Martha Hall Kelly is the author of Lilac Girls, the runaway bestseller that spent over a year on the New York Times paperback chart. She lives in Connecticut, where she spends her days filling legal pads with stories and reading World War II books. Lost Roses, her second novel, was released in April 2019 and her third, Sunflower Sisters, will publish in early 2021.