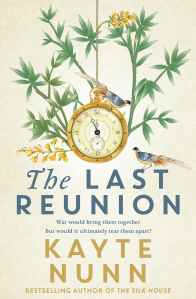 Five women come together at a New Year’s Eve party after decades apart, in this thrilling story of desire, revenge and courage, based on a brave group of Australian and British WWII servicewomen.

Burma, 1945. Bea, Plum, Bubbles, Joy and Lucy: in search of adventure, attached to the Fourteenth Army, fighting a forgotten war in the jungle. Assigned to run a mobile canteen, navigating treacherous roads and dodging hostile gunfire, they become embroiled in life-threatening battles of their own.

Oxford, 1976. A woman slips into a museum and steals several rare Japanese netsuke, including the famed fox-girl. Despite the offer of a considerable reward, these tiny, exquisitely detailed carvings are never seen again.

London and Galway, 1999. On the eve of the new millennium, Olivia, assistant to an art dealer, meets Beatrix, an elderly widow who wishes to sell her late husband’s collection of Japanese art. Olivia travels with Beatrix to a New Year’s Eve party, deep in the Irish countryside, where friendships will be tested as secrets kept for more than fifty years are spilled.

Inspired by the heroic women who served in the ‘forgotten war’ in Burma, The Last Reunion is a heartbreaking love story and mystery by the international bestselling author of The Botanist’s Daughter and The Silk House.

Kayte Nunn’s novels are always highly anticipated for me and each one is a delight to read. The Last Reunion is inspired by the women who served in Burma during WWII, running canteens near the frontlines. I have read quite widely on WWII, both fiction and non-fiction, yet I hadn’t heard of these service women at all prior to reading this novel. I honestly didn’t even know there were canteens in operation during the war either, much less that they travelled from battle to battle, entirely run by women who had volunteered for the service. I really love what Kayte says in her author note about writing fiction that is inspired by real events:

‘Fiction is about what is possible, not what is actual; my imagining of the events is exactly that – an imagining and not based on an actual event.’ – Author note.

In keeping with this, I think she does a splendid job of paying homage to these service women. Kayte recreates the type of work the servicewomen would have been undertaking, all of it playing out against a backdrop of the war in Burma, an overlooked war that has been dubbed “the forgotten war”. Not for those who served, I’d wager. As always, Kayte’s research into the world she has chosen to immerse us in was second to none. I valued the way in which Kayte used visual journals created by Bea within the narrative as a means of conveying to Olivia (and the reader) what life was like during the Burma campaign.

Along with providing a new fictional perspective on WWII, The Last Reunion is also a novel about friendship, as well as art, specifically, Japanese Netsuke. A quick google brings up some glorious images of these miniature carvings, they are so detailed and incredibly clever. It was surprising to read about the sale value of this type of art – and this was in 1999, as well, so no doubt it would be more nowadays. Normally with dual timelines I gravitate towards the historical timeline more but in this case, I really enjoyed the 1999 (contemporary) timeline immensely. The spark between Olivia and a much older Bea was really enjoyable to read and I liked revisiting that moment in history where we all thought the world was going to go haywire because of Y2K. It’s funny how books can bring little things like that back for you.

I do really love stories about female friendship that also celebrate strength of character and the ties that bind. I also love stories that are structurally interesting and The Last Reunion reveals its story in a captivating back and forth unfolding that built the tension nicely as well as ensuring that both timelines were knitted together cohesively. Kayte has woven important themes into this story about violence against women that raise questions about how much has changed across the decades, or not changed, in terms of speaking out and seeking justice. I really appreciated the way in which she used both timelines – WWII and 1999 – to demonstrate this. There is a third timeline at the opening of the novel, but I’m not going to say too much on that except that it was a cracking good way to start the story off and it hooked me immediately.

The Last Reunion is everything readers have come to love about Kayte Nunn’s novels: a unique story with memorable characters and deeply moving moments. It was thoroughly enjoyable and beautifully written.

Thanks is extended to Hachette Australia for providing me with a copy of The Last Reunion for review.

Kayte Nunn is a former book and magazine editor, and the author of five previous novels, including the international bestselling The Botanist’s Daughter, The Forgotten Letters of Esther Durrant and The Silk House. The Botanist’s Daughter was the 2020 winner of the Winston Graham Historical Fiction Prize. The Last Reunion is based on the experiences of the Women’s Auxiliary Service (Burma) during the Second World War. Kayte lives in the Northern Rivers region of New South Wales. You can find Kayte at kaytenunn.com

13 thoughts on “Book Review: The Last Reunion by Kayte Nunn”