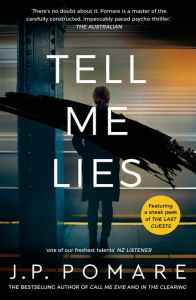 Psychologist Margot Scott has a picture-perfect life: a nice house in the suburbs, a husband, two children and a successful career.

On a warm spring morning Margot approaches one of her clients on a busy train platform. He is looking down at his phone, with his duffel bag in hand as the train approaches. That’s when she slams into his back and he falls in front of the train.

Margot’s clients all lie to her, but one lie cost her family and freedom.

It’s not often I read a book from start to finish in a day, much less an afternoon, but Tell Me Lies was not leaving my white knuckled grasp until the end. This is not a long novel, coming in at a concise 230 pages, but it’s utterly gripping from start to finish, my speed in reading it owing more to that than its actual page count. This novel was originally published as an Audible Original and I can imagine how tense it would be to listen to; for those, like me, who prefer to read their books than listen to them, it’s about to be released from Hachette in paperback and ebook. Perfectly timed for reading between Christmas and New Year.

I don’t mind a twisty psychological thriller and this one was certainly well thought out. All the clues pointing one way towards a foregone conclusion until the moment when they don’t. But wait, there’s more. I found aspects of this story truly frightening. The way in which someone who is a true psychopath can insinuate themselves into the lives of others, particularly if they have the financial means to aid in their deception. It was a long game too, that this particular person had been playing, which just made it all the more frightening; how well thought out everything had been, the patience of it all.

Another captivating and gripping release from the brilliant J.P. Pomare. Highly recommended.

Thanks is extended to Hachette Australia for providing me with a copy of Tell Me Lies for review.

J.P. Pomare is an award winning writer who has had work published in journals including Meanjin, Kill Your Darlings, Takahe and Mascara Literary Review. He has hosted the On Writing podcast since 2015 featuring bestselling authors from around the globe. His first novel, Call Me Evie, was critically acclaimed and won the Ngaio Marsh Award for Best First Novel. In The Clearing, Pomare’s second novel, was also a critically acclaimed bestseller.
He was born in New Zealand and resides in Melbourne with his wife.

2 thoughts on “Book Review: Tell Me Lies by J.P. Pomare”