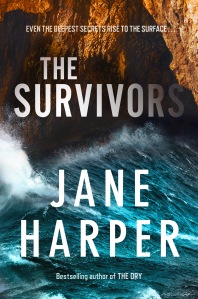 The guilt that still haunts him resurfaces during a visit with his young family to the small coastal community he once called home.

Kieran’s parents are struggling in a town where fortunes are forged by the sea. Between them all is his absent brother, Finn.

When a body is discovered on the beach, long-held secrets threaten to emerge. A sunken wreck, a missing girl, and questions that have never washed away…

Jane Harper has returned with a thrilling new crime mystery, which in my opinion, is her best yet. I have enjoyed each of her releases as I love the way she writes, however, the outback is not my favourite setting, and two out of her previous three were set in the outback. She had already proven, with Force of Nature which was set in the forest, that she could bring any setting to life, and here she is again, turning her hand to a new setting, the wild Tasmanian coast, and it’s a dazzling tour de force.

The mystery within in this novel is twofold. A new crime blows the cobwebs off an old tragedy and as one is investigated, questions about the past come to the fore. I felt this really went a long way towards building that small town setting, where skeletons are not buried all that deep and memories are long. The wild coastal setting was brought to life so vividly, particularly the weather, the changing tides, and the way in which life was arranged around the seasons.

As always, Jane has crafted a cast of authentic and original characters. There’s a lot of baggage being carted around by many in this small town and I felt the weight of their individual histories, their burdens, their regrets, their failed hopes, and their secret longings. Often times fraught with emotion, tense and foreboding, Jane uses her characters in conjunction with her plot with masterful intent, unspooling the mystery, laying down new pieces to the puzzle, and stitching it all together with her trademark brilliance.

The title of the book has significance with regards to the setting, an element of the story that I particularly liked. Potential readers should note that this is a standalone novel and if you’re yet to try Jane Harper, this is an ideal one to start with.

Thanks is extended to Pan Macmillan Australia for providing me with a copy of The Survivors for review.

Jane Harper is the internationally bestselling author of the The Dry, Force of Nature, The Lost Man and The Survivors. Her books are published in forty territories worldwide, and The Dry has been adapted into a major motion picture starring Eric Bana. Jane has won numerous top awards including the Australian Book Industry Awards Book of the Year, the Australian Indie Awards Book of the Year, the CWA Gold Dagger Award for Best Crime Novel, and the British Book Awards Crime and Thriller Book of the Year. Jane worked as a print journalist for thirteen years both in Australia and the UK, and now lives in Melbourne with her husband and two children.

27 thoughts on “Book Review: The Survivors by Jane Harper”