This session was a bit different to the others so far, because this one was a discussion panel. Moderated by Angela Meyer, the other guests were Jan Carson, author of The Fire Starters, and Robbie Arnott, author of The Rain Heron. Both of these authors write magical realism, and while their novels are vastly different, their reasons for injecting magic into their writing were quite similar, as well their views on using magical realism as a conduit for writing heavy themes. 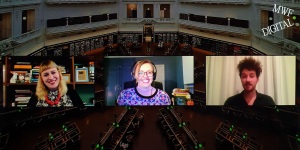 I actually enjoyed hearing from both authors, however, looking over my notes after the session revealed a leaning towards what Jan had to say. My reason for this is pretty obvious to myself as Jan’s novel is about Northern Ireland’s Troubles, which is a topic I’ve been keenly interested in since about 1995, and everything Jan had to say about present day Northern Ireland within this context was captivating.

The question was asked of both authors as to whether or not magical realism allows for reality to be more effectively addressed because you are essentially ignoring it.

Both gave a firm yes.

Robbie made the point that he can create a world that mirrors the issues we are currently facing but without the drag of worrying about accuracy in terms of who the President is and if he’s got the timeline of something right. With total invention comes creative freedom.

Which links in with what Jan said. The Fire Starters is set in contemporary Belfast, and by using absurd fantastical elements alongside life as it is in Belfast, she can give readers a ‘sucker punch’, a call to wake-up and have a reaction.

Robbie agreed, stating that thinking of something in highly imaginative terms often gives a person a new perspective on an existing crisis.

I enjoy reading magical realism, so much of what was discussed throughout the entire session really resonated. I’m interested in reading both of these novels now. The session was a lively one and so much more was explored, particularly regarding writing violence, but my notes got a bit thin towards the end as I became more engrossed in what they were saying!

16 thoughts on “#MWFDIGITAL: A Touch of Magic”

In today's episode of #bookmail there was an audible gasp, some tears of joy, and an apology to all the other books on my shelves because your status will remain unchanged for the foreseeable future.
#newrelease ⭐⭐⭐⭐⭐ #bookreview up on the blog today! 📚☕ *link in bio to read full review*
Could he be anymore fast asleep? 😂