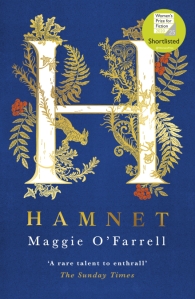 On a summer’s day in 1596, a young girl in Stratford-upon-Avon takes to her bed with a fever. Her twin brother, Hamnet, searches everywhere for help. Why is nobody at home?

Their mother, Agnes, is over a mile away, in the garden where she grows medicinal herbs. Their father is working in London. Neither parent knows that one of the children will not survive the week.

Hamnet is a novel inspired by the son of a famous playwright. It is a story of the bond between twins, and of a marriage pushed to the brink by grief. It is also the story of a kestrel and its mistress; flea that boards a ship in Alexandria; and a glovemaker’s son who flouts convention in pursuit of the woman he loves. Above all, it is a tender and unforgettable reimagining of a boy whose life has been all but forgotten, but whose name was given to one of the most celebrated plays ever written.

This was simply magnificent. I’ve never read a novel by Maggie O’Farrell before this but the way she writes sentences is just exquisite, with full use of the punctuation available to her, she makes you feel each word and its intent. I had goose bumps over and over while reading this; it truly made my heart sing.

‘Every life has its kernel, its hub, its epicentre, from which everything flows out, to which everything returns. This moment is the absent mother’s: the boy, the empty house, the deserted yard, the unheard cry. Him standing here, at the back of the house, calling for the people who had fed him, swaddled him, rocked him to sleep, held his hand as he took his first steps, taught him to use a spoon, to blow on broth before he ate it, to take care crossing the street, to let sleeping dogs lie, to swill out a cup before drinking, to stay away from deep water.
It will lie at her very core, for the rest of her life.’

Stylistically, Hamnet has an omniscient narration – the literary technique of writing a narrative in third person, in which the narrator knows the feelings and thoughts of every character in the story. Sometimes we were even privy to the thoughts of an owl perched in a tree, a flea jumping from body to body; this is a narrative technique that needs application only by highly skilled authors in order for it to work to its intended effect. Needless to say, it worked here, in this novel, by this author. The immersion effect was complete.

‘In their apartment, he lets her take his hand, lets her lead him from the fire to a chair, lets his eyes lose focus, lets her rub her fingers through his hair, and she can feel him switch from one character to another; she can sense that other, big-house self, melt off him, like wax sliding from a lit candle, revealing the man within.’

Something worth noting, although I don’t really have an explanation for this, only my own musings, but every character was referred to by name except for William Shakespeare. He was always something other: the Latin tutor, brother, son, husband, father, him. But never William, and the family name of Shakespeare was never mentioned, even though other surnames were. Was it to reinforce the man in his ordinary state of being, before he became extraordinary? To demonstrate the many roles he played within his life before he became known for that one in particular?

‘When the letter reaches him, he – lodger, brother, husband, father and, here, player –’

‘…the place in your head. I saw it once, a long time ago, a whole country in there, a landscape. You have gone to that place and it is now more real to you than anywhere else. Nothing can keep you from it. Not even the death of your own child.’

The novel is divided into two parts. Part one is twofold in the telling: we see what’s happening right now as Hamnet searches for someone to help his twin sister, who has fallen rapidly unwell. We see his family discover what is wrong, the panic, the attempts to save her, the impact her illness has on Hamnet; she is the other half of him. Alternately, within this part, we learn more about his parents, who they were before they married, who they were in the beginning with each other. Part one concludes with the intersection of Hamnet’s birth and death. It is, at the risk of sounding cliché, Shakespearean in effect. Part two of the novel is what comes after; the grief. For me, Agnes’s preparation of Hamnet’s body for burial was both beautifully tender and utterly heartbreaking. The emotion was a physical thing that leaped off the page, evidence once again of the type of writing you are treated to within this novel.

‘For the first time, the tears come for Agnes. They fill her eyes without warning, blur her vision, pouring forth to run down her face, her neck, soaking her apron, running between her clothes and her skin. They seem to come not just from her eyes but from every pore of her body. Her whole being longs for, grieves for her son, her daughters, her absent husband, for all of them.’

And then, there is the play. The birth of Hamlet.

‘Agnes cannot understand what this means, what happened. How can her son’s name be on a London playbill? There has been some odd, strange mistake. He died. This name is her son’s and he died, not four years ago. He was a child and he would have been a man but he died. He is himself, not a play, not a piece of paper, not something to be spoken of or performed or displayed. He died.’

‘Hamlet, here, on this stage, is two people, the young man, alive, and the father, dead. He is both alive and dead. Her husband has brought him back to life, in the only way he can. As the ghost talks, she sees that her husband, in writing this, in taking the role of the ghost, has changed places with his son. He has taken his son’s death and made it his own; he has put himself in death’s clutches, resurrecting the boy in his place.
He has, Agnes sees, done what any father would wish to do, to exchange his child’s suffering for his own, to take his place, to offer himself up in his child’s stead so that the boy might live.’

Yes, this is fiction, and most of it has come from the author’s imagination. But I still will no longer be able to think of Hamlet without thinking of the son. Hamnet is a brilliant work of literary historical fiction. Utter perfection.