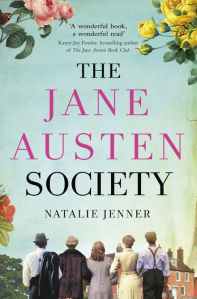 It’s only a few months since the war ended but the little village of Chawton is about to be hit by another devastating blow. The heart of the community, the Chawton estate, and site of Jane Austen’s cherished former home, is in danger of being sold to the highest bidder.

Eight villagers are brought together by their love for the famous author’s novels, to create THE JANE AUSTEN SOCIETY. As new friendships form and the pain of the past begins to heal, surely they can find a way to preserve Austen’s legacy before it is too late?

If you are a fan of Jane Austen, then you will revel in this beautiful novel that reads like a love letter to Jane herself as well as her six classic novels. For the characters within this story, Jane is revered and her novels are like life lines for them, re-read and carried around, a comfort to draw from and then later, to draw together over. The characters from Austen’s novels are like friends to these characters, they know their words off by heart and feel connections to them that steer them through life’s challenges. There’s nothing nicer than reading a beautiful book that pays homage to literature, and when it does so with such empathy and style, then it’s all the more special.

‘And that’s exactly what Austen gives us. A world so a part of our own, yet so separate, that entering it is like some kind of tonic. Even with so many flawed and even silly characters, it all makes sense in the end. It may be the most sense we’ll ever get to make out of our own messed-up world. That’s why she lasts, like Shakespeare. It’s all in there, all of life, all the stuff that counts, and keeps counting, all the way to here, to you.’

There is a lot of insight into Jane Austen throughout this novel, which offered up some of my favourite parts. But I also really enjoyed the back stories of the characters that come together to form the society. The society itself isn’t even formed until almost half way through the novel, but the story leading up to that was so engaging that it wasn’t until they formed the society that I even realised that half of the book had slipped by. This novel has a really quaint and propriety feel about it that appealed to me enormously: the English village life during that period of time coming out of WWII, a quiet but grief filled era of change. This novel also challenges the whole idea of women’s fiction and instead redefines literature preferences as a matter of taste rather than prescribed texts aimed exclusively at women or men. I loved that people were surprised by their mutual love of Jane Austen when they first found that out about each other, but then it just became normal, a part of who that person was, almost another dimension to their personality.

‘Austen saw what lack of money meant for the women in her life, and this consuming fear was what was telegraphed most loudly in all her books, hidden behind the much more palatable workings of the marriage plot. Austen knew that no amount of charity or largesse from their male relatives could ever grant women real independence. Yet, through her genius – a genius that no amount of money or power could buy because it was all inside her head, completely her own – she had accrued some small degree of autonomy by the end. Enough to work, live and die on her own terms.’

I can’t recommend this gorgeous novel highly enough. It’s just a joy to read and get lost in and would make a lovely gift to any Austen fan.

Thanks is extended to Hachette Australia for providing me with a review copy of The Jane Austen Society.

Born in England and raised in Canada, Natalie Jenner graduated from the University of Toronto with consecutive degrees in English Literature and Law, and has worked for decades in the legal industry. She also founded the independent bookstore Archetype Books in Oakville, Ontario, where she lives with her family and two rescue dogs. A lifelong devotee of all things Jane Austen, THE JANE AUSTEN SOCIETY is her first published novel.

The Jane Austen Society
Published by Orion
Released 26th May 2020