As I’ve been doing a little bit more of late, I watched before I read. This one was my book club title but once I knew the show was airing towards the end of this month (it premiered on Amazon Prime last Friday), I held off on reading it so I could watch first. Before I go any further, this is what it’s about:

Everyone in Shaker Heights was talking about it that summer: how Isabelle, the last of the Richardson children, had finally gone around the bend and burned the house down.

In Shaker Heights, a placid, progressive suburb of Cleveland, everything is meticulously planned – from the layout of the winding roads, to the colours of the houses, to the successful lives its residents will go on to lead. And no one embodies this spirit more than Elena Richardson, whose guiding principle is playing by the rules.

Enter Mia Warren – an enigmatic artist and single mother- who arrives in this idyllic bubble with her teenage daughter Pearl, and rents a house from the Richardsons. Soon Mia and Pearl become more than just tenants: all four Richardson children are drawn to the mother-daughter pair. But Mia carries with her a mysterious past, and a disregard for the rules that threatens to upend this carefully ordered community.

When old family friends attempt to adopt a Chinese-American baby, a custody battle erupts that dramatically divides the town – and puts Mia and Elena on opposing sides. Suspicious of Mia and her motives, Elena is determined to uncover the secrets in Mia’s past. But her obsession will come at an unexpected and devastating cost.

The TV series reeled me in from the start. I liked the casting, the music, the 90s vibe, the well-timed back story interludes. It was compelling, and since I hadn’t read the book, I had no idea what was coming. This story pushed my comfort buttons in a number of ways, I’m looking forward to discussing this deeper with my fellow book clubbers when we meet on Sunday. I had to reflect afterwards too, that although I really enjoyed the series, I can’t say I really liked any of the characters all that much. I’m not even sure if we’re meant to – perhaps that’s part of the lure of this story. So many lines were crossed by so many of the characters, it was quite astonishing at times.

Once I’d finished watching, I decided not to worry about reading the book. However, a chat between friends at work revealed that the ending in the book was different to that of the show, so, in the spirit of being a good book clubber, I read the book.

Sort of. Super quickly, but I got the gist that most of the book seemed to run in accord with the show.

Two things stood out as different though and influenced me one way more than the other:

1. In the book, it’s suggested that the source of Elena and Izzy’s discontent stems from over protectiveness on account of Izzy being premature. In the show, it stems from resentment. Elena didn’t want a fourth child, she already had three babies and had returned to work. Izzy was also a difficult baby, fractious and hard to settle, compounding this resentment which just seemed to go on as she grew up, wilful and resistant to her mother’s every wish. I found this representation in the show more plausible.

2. The ending. I just really liked the unexpectedness and drama of the ending as it played out in the show. The book was a bit clichéd: teenager burns down the house and runs away. The way the show ended seemed more metaphorical.

One thing I really didn’t like in the book was the way in which the Shaker Heights residents were referred to constantly with their titles, instead of just their first names, eg. Mrs Richardson instead of Elena. Whereas Mia, was Mia. I’m sure there’s something symbolic there about class representation, but it got annoying after the first chapter.

So, Reece Witherspoon has turned this book into quite a good TV series, in my opinion. Even if you weren’t a fan of the book, you might find yourself pleasantly surprised by the show. 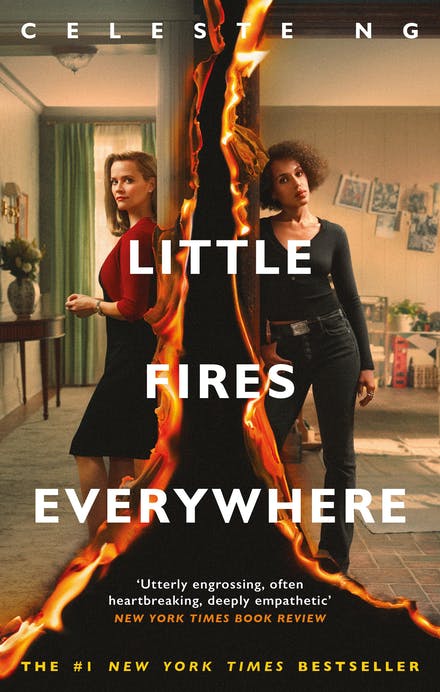 9 thoughts on “Little Fires Everywhere: TV series or the book?”