The Minute I Saw You… 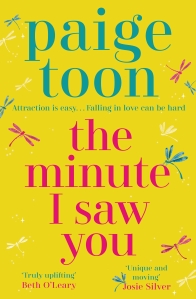 When Hannah meets Sonny, she’s irresistibly drawn to him: he’s sexy and confident, but only in town on holiday. That’s fine with Hannah – she doesn’t do long-term relationships. And luckily for her, neither does Sonny.

But as summer hots up and their chemistry shows no signs of cooling, they start to question their reasons for shutting each other out.

Are they both too broken to find love? And if they tear down the walls between them, will they still like what’s on the other side?

I’ve long maintained that there is a big difference between a romance and a love story. This is a love story. The blurb may read like a romance, but in my opinion, it ticks all the boxes for angst ridden, heart-breaking, all consuming love story.

‘You know I don’t do relationships,’ I say awkwardly, turning away and pulling up a handful of grass.
‘We are in a relationship,’ he snaps, making me jump. He sits up with frustration and plants his palms on the ground behind him. ‘You know that, don’t you? This is the closest thing to a relationship I’ve ever had. The only thing that’s missing is the sex,’ he adds with exasperation.

The Minute I Saw You is about two people who, despite their attraction to each other, are determined to not fall in love. This novel is a study in trauma and the way in which unresolved trauma can dig down deep into a person’s soul, affecting everything and steering their choices long after it’s been lived. This was, at times, a truly heartbreaking story and entirely unexpected in terms of where it went for both of the characters.

‘Sometimes, Hannah,’ he says in a deep, dark voice that sends a chill down my spine, ‘I think you and I are so damaged that being together might be the worst thing we could possibly do to each other.’

The supporting cast within this novel are terrific. From friends through to family, this story shows the entire notion of ‘find your tribe’ in action. It also demonstrates just how important trust is when it comes to working through trauma, having people there for you who are able to empathise and support when necessary. Hannah’s aunt June and uncle Charles were such a force within Hannah’s life and yet they were both off-screen characters; June was dead and Charles was away on a cruise for the majority of the novel. This is where Paige Toon really shines in her skill as an author; her characters are so wholly three dimensional that even when they aren’t ‘there’ they are very much present.

‘When I first went to live with my aunt and uncle, it took a lot of coaxing to get me to open up, while Charles could’ve talked the hind legs off a donkey. June was quieter, more willing to embrace the silence. I feel a pain, missing her – she was very comfortable to be around, a soothing, calming soul who always made me feel safe. But it was Charles who challenged me, who encouraged me out of my shell and who helped me to rediscover my voice and the confidence I’d had…’

I really enjoyed the project that Hannah and Sonny bond over, whereby Sonny photographs the eyes of homeless people in macro in order to raise awareness about the need for charitable vision care. This whole issue was presented so well within the novel and really opened up my mind to what it might be like to be living on the streets while not even being able to see properly. I need my glasses for every waking moment and even when I take them off to shower I am frustrated by my poor vision. I hate not being able to see. The privilege of having such an ease of access to good vision care that I take for granted was evident when contrasted, via some impactful examples, to the experiences of the homeless people Sonny met throughout the project. I loved the exhibition that Sonny put together for his awareness campaign, both its intent and what it must have looked like.

‘The photographs have been blown up to giant-size. A central coloured iris is set on a square white background, and tiny words run around the rim of the iris in a circle, telling us about the subject: who they are and what they like people to know about them. Sometimes the subjects recount how they became homeless…’

While there is undoubtedly some very sad moments within this story, a particular gravity to some scenes that leave quite the imprint on you, I found this overall to be an incredibly hopeful story. And as you all know, I am all there for anything with even just a hint of ‘uplit’ about it. I became quite invested in Hannah and Sonny, both as individuals and as a couple. They might have been a risk to each other, in terms of the trauma they each brought to the table, but their love story was beautiful and deeply meaningful.

Thanks is extended to Penguin Random House Australia for providing me with a review copy of The Minute I Saw You and for the invitation to take part in the blog tour. Follow the tour to read more reviews of this gorgeous novel.

Paige Toon grew up between England, Australia and America and has been writing books set in sun-drenched locations around the world since 2007. She has released thirteen novels and a three-part spin off series for young adults.
In 2014, Paige set up a club, The Hidden Paige, in order to share free short stories and extra content with her readers. Sign up at paigetoon.com or visit her website to find out more about the author and her characters.

4 thoughts on “#BlogTour #BookReview: The Minute I Saw You by Paige Toon”