Where the Sun Will Rise Tomorrow… 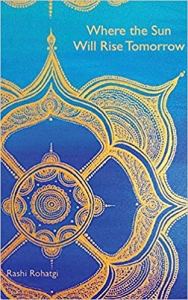 It’s 1905, and Japan’s victory over the Russians in the Russo-Japanese War has shocked the British and their imperial subjects. In India, 16-year-old Leela and her younger sister, Maya, are spurred on to wear homespun as a sign of protest to show the British that the Indians won’t be oppressed for much longer, either.

But when Leela’s betrothed, Nash, asks her to circulate a petition amongst her classmates to desegregate the girls’ school in Chandrapur, she’s wary. She needs to remind Maya that the old ways are not all bad, for soon Maya will have to join her own betrothed and his family in their quiet village. When she discovers that Maya has embarked on a forbidden romance, Leela’s response shocks her family, her town, and her country firmly into the new century.

Published after winning Galaxy Galloper’s “Novella Spectacular” contest to find the best unpublished novella, Where the Sun Will Rise Tomorrow is the beautifully written story of a girl who has no plans to become anything more than what has been promised to her by history—until those promises become untenable.

This was an interesting novella, very well written and beautifully immersive in terms of day to day life in India in the early 20th century. There is, however, an assumption that the reader will be familiar with the political history of India during this era. I was not, and after being thoroughly confused on what was actually going on and why, I took a break from reading so I could instead read up on the history and politics. This did help, to a certain extent, but as is often the way with novellas, they don’t have enough space for background details and a slowing down of the pace. The ending was particularly dramatic, but somewhat out of character. Much of this novella left me feeling exhausted by the whirlwind of loaded conversations with little context provided to the reader for clarity. All the what was there, but not enough of the why to satisfy my reading tastes.

Thanks is extended to the publisher for providing me with a copy via NetGalley of Where the Sun Will Rise Tomorrow for review.

Rashi Rohatgi is the author of Where the Sun Will Rise Tomorrow. An Indian-American Pennsylvania native who lives in Arctic Norway, her short fiction and poetry have appeared in A-Minor Magazine, The Misty Review, Anima, Allegro Poetry, Lunar Poetry, and Boston Accent Lit. Her non-fiction and reviews have appeared in The Review Review, Wasafiri, World Literature Today, Africa in Words, The Aerogram, and The Toast. She is a graduate of Bread Loaf Sicily and associate professor of English at Nord University.

6 thoughts on “Book Review: Where the Sun Will Rise Tomorrow by Rashi Rohatgi”