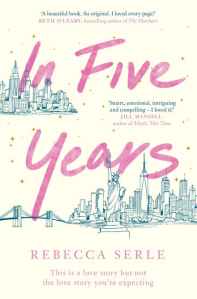 Perfect for fans of ME BEFORE YOU and ONE DAY, this heart-breaking story of love, loss and life will have you questioning everything you thought you knew about destiny…

Where do you see yourself in five years?

Type-A Manhattan lawyer Dannie Kohan has been in possession of her meticulously crafted answer since she understood the question. On the day that she nails the most important job interview of her career and gets engaged to the perfect man, she’s well on her way to fulfilling her life goals.

That night Dannie falls asleep only to wake up in a different apartment with a different ring on her finger, and in the company of a very different man. The TV is on in the background, and she can just make out the date. It’s the same night – December 15th – but 2025, five years in the future.

It was just a dream, she tells herself when she wakes, but it felt so real… Determined to ignore the odd experience, she files it away in the back of her mind.

That is, until four and a half years later, when Dannie turns down a street and there, standing on the corner, is the man from her dream…

The blurb for this book opens with: ‘This is a love story but not the love story you are expecting…’

They mean that. Take their word for it. I didn’t, and I was reading along, expecting Sliding Doors, but ended up in Beaches. Two vastly different universes. This is a very good story, it really is, but the distance between my expectations of what it was going to be and what it actually turned out to be was just so vast, it prevented me from approaching the story in the right way. I was also, at the time of picking this one up, craving something, well, more like Sliding Doors.

‘I saw what was coming, but I did not see what it would mean.’

Amazon Prime released a television series late last year called Modern Love and I feel like this story is very much in tune with the themes of that series – it could almost be adapted as an episode if they were to make a second season, it even had the New York setting right. Every so often I’ll come across a novel that I feel would play out much better on the screen than it does on the page, and this is definitely one of those times.

Despite the emotional intensity of the story, I did, unfortunately, find it rather dull in places. There were whole sections where people were just going through the motions of daily life and having conversations with each other that really went nowhere and contributed nothing to the story. Out of the entire novel, I enjoyed the last 15% the most. This is where everything seemed to fall into place and the cleverness of the plot became apparent. The last scene of the novel was one I particularly liked; it really dazzled and I could see it playing out so perfectly on a screen.

Overall though, this is probably one of those times where the reader/book fit is just not there. I’m fairly confident though that there will be plenty of readers who will gush about this one and I wouldn’t at all be surprised to see it picked up and turned into a movie or television series at some stage, hopefully by Netflix or Prime so I can watch it without delay and see just how right I was about its adaptability.

Thanks is extended to Hachette Australia for providing me with a copy via NetGalley of In Five Years for review.

Rebecca Serle is an author and television writer who lives between NYC and LA. Serle most recently co-developed the television adaptation of her YA series FAMOUS IN LOVE for Freeform and Warner Brothers Television. She is a graduate of the University of Southern California. Her bestselling US debut adult novel DINNER LIST was a Book of the Month club pick, Costco book club pick, and Bustle Bookclub selection.

2 thoughts on “Book Review: In Five Years by Rebecca Serle”