Indigenous trauma in the shadow of colonialism… 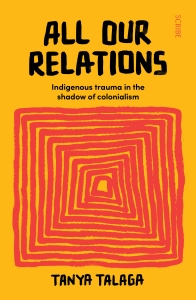 The world’s Indigenous communities are fighting to live and dying too young. In this vital and incisive work, Tanya Talaga explores intergenerational trauma and the alarming rise of youth suicide.

From Northern Ontario to Nunavut, Norway, Brazil, Australia, and the United States, the Indigenous experience in colonised nations is startlingly similar and deeply disturbing. It is an experience marked by the violent separation of Peoples from the land, the separation of families, and the separation of individuals from traditional ways of life — all of which has culminated in a spiritual separation that has had an enduring impact on generations of Indigenous children. As a result of this colonial legacy, too many communities today lack access to the basic determinants of health — income, employment, education, a safe environment, health services — leading to a mental health and youth suicide crisis on a global scale. But, Talaga reminds us, First Peoples also share a history of resistance, resilience, and civil rights activism, from the Occupation of Alcatraz led by the Indians of All Tribes, to the Northern Ontario Stirland Lake Quiet Riot, to the Standing Rock protests against the Dakota Access Pipeline, which united Indigenous Nations from across Turtle Island in solidarity.

All Our Relations is a powerful call for action, justice, and a better, more equitable world for all Indigenous Peoples.

My thirteen year old son asked me not all that long ago why his Indigenous friends kept having to go to so many funerals. My son is not a fool. He knows ‘why’ they keep having to go: because Indigenous youth in our region, predominantly young men, are dying from suicide. His ‘why’ ran deeper than that. It’s not the sort of question I ever envisaged having to attempt to answer as a parent. More importantly, it’s not the sort of question a young teenager should feel compelled to ask. And for his friends? Therein lies the real tragedy, as they regularly get dressed in their white shirts and black pants to attend the funerals of their peers, young adults who have died far too young.

‘In Indigenous communities, the lasting impact of colonial history has directly resulted in a severing of the crucial spiritual, emotional, and physical tethers to the past. The historical separation of Indigenous people from their land, the separation of children from their parents, the separation from their traditional culture and ways of living – all of these things have contributed to a spiritual emptiness that has resulted in generations of children’s deaths.’

‘These Indigenous peoples were largely jobless and lived in impoverished conditions in cities and small country towns; they fell into patterns of addiction and had poor health and lower life expectancies than the general population; they suffered from intense discrimination, both societal and systematic; and they became overrepresented in the prison system. Children routinely grew up with no sense of belonging, no sense of themselves or where they came from, so they begin to do something that was largely unheard of before: they began to kill themselves. And so did their children and their grandchildren.’

‘Today’s Aboriginal youth are often born into a world characterised by normative instability, to parents who may have substance abuse issues, who live in extreme poverty or, because of their own disruptive upbringings, lack the tools necessary to raise children. They are born into social exclusion, so they are not only at risk of suicide, they also face higher rates of sexual abuse and of self-destructive behaviours such as petrol sniffing and other forms of substance abuse.’

This book is comprehensively researched and meticulously informed. While predominantly about Canada, the author’s home country, it also examines the impact of colonisation on the following Indigenous peoples:

Guarani in Brazil
Sami in Norway, Sweden, Finland, and Russia
Inuit in the Northern territories in Canada
First Nations, Metis in Canada
Native Americans in the United States
Aboriginal and Torres Strait Islanders in Australia

Not so much about comparison, but rather this examination of more than one society provides context for the crisis and highlights the similarities, which are, to be frank, disturbingly apparent. Honestly, this is likely the most impactful book I’ve read in recent years. In no way does it indulge in its trauma, but it is written with a clear adhesion to the facts, which overall, speak for themselves.

Overwhelmingly, history does not tell a pretty story, in any of these countries, when it comes to the human rights of Indigenous peoples. Contemporarily, we still have a lot of ground to cover before the gap that needs closing is no longer a chasm. All Our Relations is an excellent book that explains with conviction why colonisation still matters; why, generations on, its cataclysmic effect still impacts with force. I highly recommend this book to everyone as essential reading.

Thanks is extended to Scribe for providing me with a copy of All Our Relations for review.

Tanya Talaga is the acclaimed author of Seven Fallen Feathers, a multi-award winner including the RBC Taylor Prize, the Shaughnessy Cohen Prize for Political Writing, and the First Nation Communities READ: Young Adult/Adult Award. The book was a finalist for the Hilary Weston Writers’ Trust Nonfiction Prize and the BC National Award for Nonfiction. Talaga was the 2018 CBC Massey Lecturer, and is the author of the US bestseller All Our Relations. For more than twenty years she has been a journalist at the Toronto Star. Talaga is of Polish and Ojibwe descent. Her grandmother is a member of Fort William First Nation. She lives in Toronto with her two teenage children.

All Our Relations
Published by Scribe
Released 3 March 2020

Read for #2020ReadNonFic hosted by Book’d Out
Category: Social Science

4 thoughts on “Book Review: All Our Relations by Tanya Talaga”