The Girls with No Names… 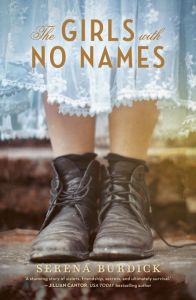 The Girls with No Names pulls readers into the gilded age of New York City in the 1910s, when suffragettes marched in the street, unions fought for better work conditions – and girls were confined to the House of Mercy for daring to break the rules.

Not far from Luella and Effie Tildon’s large family mansion in Inwood looms the House of Mercy, a work house for wayward girls. The sisters grow up under its shadow with the understanding that even as wealthy young women, their freedoms come with limits. But when the sisters accidentally discover a shocking secret about their father, Luella, the brazen older sister, becomes emboldened to do as she pleases.

But her rebellion comes with consequences, and one morning Luella is mysteriously gone. Effie suspects her father has made good on his threat to send Luella to the House of Mercy and hatches a plan to get herself committed to save her sister. But she made a miscalculation, and with no one to believe her story, Effie’s escape from the House of Mercy seems impossible – unless she can trust an enigmatic girl named Mable. As their fates entwine, Mable and Effie must rely on each other and their tenuous friendship to survive.

Home for Unwanted Girls meets The Dollhouse in this atmospheric, heart-warming story that explores not only the historical House of Mercy, but the lives – and secrets – of the girls who stayed there.

Another appalling hidden history about mistreatment of women dusted off and at last given its due attention. The Girls with No Names is about the American version of Ireland’s Magdalene Laundries, an atrocious institutional system designed to keep women – and young girls – in line that lasted too long into the twentieth century. This novel is so good. The writing, the treatment if its history, the characters, the storyline – I am so impressed and so grateful to the author for writing it.

‘The shadows of tree branches stretched over the ceiling, reflections of an outer world I could no longer reach. I thought of the simplicity of a tree branch, and of all the things I took for granted, pen and paper even more so. The House of Mercy was a world unto itself, a thing of cold entrapment, boredom, mindless physical labour, spiritual practice, redemption, cleansing of our souls and sins. And hard work, mostly just hard work.’

This is utmost a story about women and the lack of agency they had over their own lives in the late 19th and early 20th centuries – truth be told, long before that and long after too, but that period is the era in which this novel is set. Serena Burdick gives us the story through the gaze of three women, and from here, through the connections these women have with other women, she has achieved a well rounded portrayal of feminine oppression in America in the years preceding WWI. I was particularly drawn to Mable’s story, utterly tragic on so many levels and all too common for the times. I was also utterly horrified by how young the girls committed to these institutions were. How could a girl less than ten years of age be considered corrupted and in need of institutionalisation? It beggars belief, but those who dive into history know it is all too true.

‘The dead occupied so much space inside me, you could say it was inevitable.’

The Girls with No Names would make an excellent film (fingers crossed, producers seem to be mining books for ideas left right and centre nowadays). The themes of love and loyalty play out superbly and while my heart broke a bit at the end, it also lifted in hope. I love a novel that can reward its readers with proper fulfilment through its ending. There’s so much in this novel, but it’s paced well and plotted with finesse. Highly recommended for fans of historical fiction inspired by actuality.

Thanks is extended to HarperCollins Publishers Australia for providing me with a copy of The Girls with No Names for review.

Serena Burdick graduated from The American Academy of Dramatic Arts in California before moving to New York City to pursue a degree in English Literature at Brooklyn College. Author of Girl In The Afternoon, she lives in Western Massachusetts with her husband and two sons.

5 thoughts on “Book Review: The Girls with No Names by Serena Burdick”