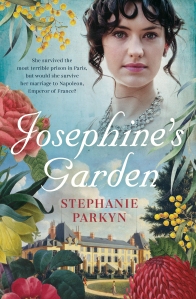 A captivating story of love, nature and identity in Napoleon’s France

France, 1794. In the aftermath of the bloody end to the French Revolution, Rose de Beauharnais stumbles from prison on the day she is to be guillotined. Within a decade, she’ll transform into the scandalous socialite who marries Napoleon Bonaparte, become Empress Josephine of France and build a garden of wonders with plants and animals she gathers from across the globe.

But she must give Bonaparte an heir or she risks losing everything.

Two other women from very different spheres are tied to the fate of the Empress Josephine – Marthe Desfriches and Anne Serreaux. Their lives are put at risk as they each face confronting obstacles in their relationships and in their desire to become mothers.

From the author of Into the World comes a richly imagined historical novel about obsession, courage, love and marriage.

Sometimes it is interesting to note how you can look back over your reading for the year and see certain trends in releases. I find this particularly relevant with historical fiction. Of course, this is in the most part coincidental. Books take authors different lengths of time to write and the topics of these books are kept reasonably close in the initial planning and writing stages. This year, I have read three new historical fiction releases set in France either before, during, or just after the French Revolution. I have a fourth waiting for me on my TBR. It is an interesting period of history, but it is not without its more repulsive aspects. Josephine’s Garden is an ambitious novel, covering the relationship between Napoléon Bonaparte and ‘his’ Josephine, from just before they met up until their divorce – about sixteen years. It is a long and involving novel, so not one to dip in and out of. While I probably liked the second half far more than the first, overall, it is well worth the read, particularly if you, like me, enjoy early explorer botanical history.

This novel is infused with atmosphere and it wears its research well. The decadence and debauchery of the post-revolution period is one of those repulsive aspects I was alluding to previously. The way people carried on was just disgusting. And so crude. There were times when reading the first half of this novel where my stomach actually felt like it was turning over at the image of what was being portrayed on the page. And this is where Stephanie Parkyn really shines as a writer of historical fiction. She recreates her setting to perfection, warts and all, and does not shy away from the ridiculous, nor the obscene. And in doing this, her work is coloured with an authenticity and attention to detail that any lover of historical fiction will appreciate.

‘He felt disconnected from this new France. The people had thrown all decency aside. They cared for nothing other than selfish pleasures. The mark of highest status was not one’s learning, as he had hoped, but how many months one had spent in prison during the Terror. When he’d left five years earlier, people spoke of patriotism and liberty, but on his return all he saw was desire for power and riches, an intoxication with glory and vanity. The aristocracy was gone, but what replaced it made him shudder with disgust.’

Josephine is not the only character that we follow in this novel. Two other women round out the narrative and act as points of reference for displaying French society at other levels. Marthe Desfriches and Anne Serreaux are both wives of botanists. It took a very long time to see the connection between all three of these women, and I will admit that this was one of the times that I felt the length of the novel bearing down a bit too much. Another was in the few loose threads that were not actually tied up. In particular, I felt that the orang-utan, Rose, was introduced but not fully utilised, more mentioned as a novelty, yet brought in enough to make the reader feel as though they were left wanting in terms of knowing Rose’s fate. Marthe was a very interesting character for me, but again, I feel as though we really only just scratched the surface with her. There was so much of Josephine that I could have done without in preference to spending more time with the others.

‘The ape stretched up her chestnut arm and scratched beneath her armpit. Marthe watched transfixed as the ape turned her head to her and lowered her arm to point directly at Marthe’s heart. I see you.’

I did not realise many things about Napoléon and Josephine prior to reading this novel. There’s probably a few things now that I wish I still didn’t know! Napoléon, as depicted within this novel, was a disgusting man, both publicly and privately. It really doesn’t say much in favour about the French for putting up with him for so long. I took a long time to warm to Josephine and it really wasn’t until she was elbow deep in her gardening that this happened. I have a particular interest in the history of botany though, so it makes sense that I would find these parts more interesting over any others. I did admire the way Stephanie Parkyn arranged this novel into its various parts. The way she headed these sections showed the transformation of Josephine throughout the various stages of her life. One thing we can take away from Josephine’s story is the powerlessness of women during this era, and the danger associated with being female. I feel that Stephanie Parkyn captured this concept extremely well. I stated at the beginning of this review that Josephine’s Garden was an ambitious novel. Was it overly ambitious? I think not. In the end, Stephanie Parkyn fulfilled her ambition with this one rather well. Recommended reading for fans of sweeping and involved historical fiction.

‘Her collection was to be featured in a book about the best modern gardens in France by the celebrated author Alexandre de Laborde who praised Malmaison as the only genuine botanical garden in France. A botanical garden. A garden in service to botany. It had pleased her to her fingertips. Finally she would be seen not as a scandalous socialite, or an empress, but as a collector of consequence.’

Thanks extended to Allen & Unwin for providing me with a copy of Josephine’s Garden for review.

Stephanie Parkyn’s first novel, Into the World, was published to wide acclaim in 2017. Stephanie always wanted to write fiction, growing up in a book-loving family in Christchurch, New Zealand. She had a rewarding career as an environmental scientist, but is now living her dream of writing stories and travelling to find them. She is fascinated by the human motivations behind the events of history and is particularly drawn to illuminating women’s stories. After enjoying ten years living and exploring in Australia, she now writes from her home in a bush-clad valley in Coromandel Peninsula, New Zealand. Josephine’s Garden is her second novel.