The Bee and the Orange Tree…

It’s 1699, and the salons of Paris are bursting with the creative energy of fierce, independent-minded women. But outside those doors, the patriarchal forces of Louis XIV and the Catholic Church are moving to curb their freedoms. In this battle for equality, Baroness Marie Catherine D’Aulnoy invents a powerful weapon: ‘fairy tales’.

When Marie Catherine’s daughter, Angelina, arrives in Paris for the first time, she is swept up in the glamour and sensuality of the city, where a woman may live outside the confines of the church or marriage. But this is a fragile freedom, as she discovers when Marie Catherine’s close friend Nicola Tiquet is arrested, accused of conspiring to murder her abusive husband. In the race to rescue Nicola, illusions will be shattered and dark secrets revealed as all three women learn how far they will go to preserve their liberty in a society determined to control them.

This keenly-awaited second book from Melissa Ashley, author of The Birdman’s Wife, restores another remarkable, little-known woman to her rightful place in history, revealing the dissent hidden beneath the whimsical surfaces of Marie Catherine’s fairy tales. The Bee and the Orange Tree is a beautifully lyrical and deeply absorbing portrait of a time, a place, and the subversive power of the imagination.

It was such a pleasure to read The Bee and the Orange Tree, the second novel by acclaimed author, Melissa Ashley. Set in 1699, under the gaze of three women, Melissa Ashley takes us back to Paris, where a woman could write and perform stories within literary saloons, but have no agency whatsoever over their own life.

‘She felt it her duty to lay bare the dark and piquant potential of women unafraid of their own minds.’

While this novel in part tells the story of the invention of fairy tales – long before the Brothers Grimm and Hans Christian Andersen – it is also an illuminating sociological examination of the layers of patriarchy set firmly in place within 17th century France.

‘…a marriage, however poisonous, is to be protected at all costs. There are no grounds for separation. Not adultery, not cruelty, not even fraud. Women are minors in the eyes of the law. Either they’re owned by their parents or their husbands.’

Never more is this demonstrated than in the fate of Nicola Tiquet. Yet, there are other examples of these restrictions in action throughout the story. Marie Catherine’s own experiences with her elderly wastrel husband; Angelina’s experiences as a daughter who was given over to be raised in a convent, despite not being an orphan. These women are oppressed, they have been cheated out of experiencing their lives as fully as their male counterparts’ experience, but they have not been beaten. Their strength prevails and Melissa Ashley articulates this with vivacity.

‘A convent or a marriage – the twin prisons of women’s lives.’

The writing throughout is lyrical, giving the reader the illusion of being caught within a fairy tale whilst reading about fairy tales. Yet there is also a brutality in evidence, reminding the reader that within every fairy tale, there is darkness before light, and not every character is destined to achieve their happy ending. There is a strong presence of history throughout the novel and coupled with Melissa’s elegant prose, the story is dripping with atmosphere. I felt like I was walking alongside the characters on the streets of Paris, experiencing, as they were, the literary saloons, the cafes, and most horrifying of all, the prisons. I fell in love with this story and found myself lingering over it far longer than what I normally do with a novel. In addition, it is just so beautifully presented. Affirm have published this as a hardback with the most gorgeous endpapers and fairy tale illustrations throughout, turning this novel into a sensory experience that goes beyond just reading a story. It rather makes me long for the days when all new releases were hardbacks. I highly recommend The Bee and the Orange Tree, particularly to those who enjoy reading about writers and the origins of stories from the past.

Thanks is extended to Affirm Press for providing me with a copy of The Bee and the Orange Tree for review. 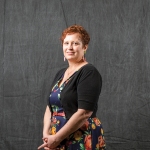 Melissa Ashley is a writer, poet, birder and academic who tutors in poetry and creative writing at the University of Queensland. She has published a collection of poems, The Hospital for Dolls, short stories, essays and articles. What started out as research for a PhD dissertation on Elizabeth Gould became a labour of love and her first novel, The Birdman’s Wife, which has been printed in three formats and sold more than 30,000 copies since release. Melissa’s second novel, The Bee and the Orange Tree, will be published in November 2019 with Affirm Press.

10 thoughts on “Book Review: The Bee and the Orange Tree by Melissa Ashley”