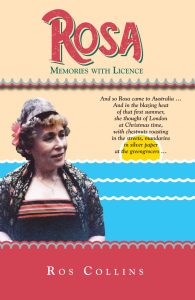 As British as Earl Grey tea, ‘Rosa’ has spent most of her life in Melbourne. Her children and grandchildren are all Australian-born, as was Alan, her writer husband. But Rosa is hesitant about an unconditional commitment to Vegemite, mateship and the ANZAC legend; she remains a perennial migrant, often amused by her memories, here presented with a deliberate overlay of lies and licence.

Her family’s history is nearer to Dickens than the shtetls of Eastern Europe; Rosa herself recalls Dunkirk and the Blitz. Beyond the conservatism of 1950s London that she escaped, Rosa flings open the windows and doors to invite the reader into her Anglo-Australian-Jewish family. She refrains from delving into deep psychological examinations of what it means to be an only child, an only grandchild, a reluctant Jewish teenager, and muse to a man whose terrible childhood scarred him for life; the ‘clues’ are all there for the curious reader to discover.

I would have to say that this is the most enjoyable memoir I have ever read. Maybe, in some part, this is owing to these words from the author in the introduction, where she describes the nature of her book:

This instantly appealed to me, as memoirs and I have a difficult relationship. With this preface, I was able to just settle in and read, in the same way as I would with any fiction book. Ros writes in such a warm and conversational style, giving the reader the same feeling you would get if you were sitting opposite her drinking tea and listening to her recount memories and family stories. Her personality really shone through for me, turning this into a most enjoyable reading experience. Ros describes her book as a means of offering:

‘A small window into some unfamiliar scenes of Anglo-Australian-Jewish life.’

And this is exactly what she does. Rather than offer a chronological history, she has fashioned the book in a more eclectic style, like a series of vignettes, each chapter themed to a certain agenda. In this it wanders, but I liked that about it, dipping in and out of Rosa’s history, pondering alongside her on the greater meaning of life’s moments.

Rather than a life story, or even a journey of sorts, this book is more of an introspection on her personal Jewish history. Along the way, I learnt so much about what it means to be Jewish, pre and post Holocaust. I was also enlightened on the many ways in which being Jewish differs for people, much of this being dependent on where you have migrated from and your family’s history in relation to the Holocaust. There are some heavy themes touched on, but Ros keeps the book, as a whole, on an even keel. There is a lot of love infused into this book and it glows with warmth and genuine feeling.

By the time I reached the end, I realised that I hadn’t given much thought to what might be true and what might be fiction. I had been too busy just enjoying it all, which I would wager, was Ros’s intent. If you are at all interested in finding out about Anglo-Australian-Jewish life, then this might just be the book you have been looking for. Whether you are a fan of memoirs or not, this book has much to offer to all readers and I recommend it highly.

Thanks is extended to Hybrid Publishers for providing me with a copy of Rosa for review.

Ros Collins’ first book, Solly’s Girl, was published in 2015 as a companion piece to Alva’s Boy written by her late husband, Alan. Like him, she strongly believes in the power of humorous literature; any serious intent is clothed with a self-deprecating wit. Professionally, Ros Collins was a TAFE college librarian. In later years she was director of Makor Jewish Community Library (now the Lamm Jewish Library of Australia). She is interested in writing about Anglo-Australian-Jews, often overlooked in fiction and memoir. ‘We have an 1830s convict in our family – aristocracy!’ Ros shares her 1928 bayside cottage with Roxie, a very British corgi with republican tendencies.