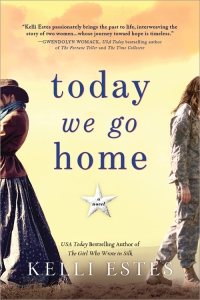 Seattle, Washington
Larkin Bennett has always known her place, whether it’s surrounded by her loving family in the lush greenery of the Pacific Northwest or conducting a dusty patrol in Afghanistan. But all of that changed the day tragedy struck her unit and took away everything she held dear. Soon after, Larkin discovers an unexpected treasure—the diary of Emily Wilson, a young woman who disguised herself as a man to fight for the Union in the Civil War. As Larkin struggles to heal, she finds herself drawn deeply into Emily’s life and the secrets she kept.

Indiana, 1861
The only thing more dangerous to Emily Wilson than a rebel soldier is the risk of her own comrades in the Union Army discovering her secret. But in the minds of her fellow soldiers, if it dresses like a man, swears like a man, and shoots like a man, it must be a man. As the war marches on and takes its terrible toll, Emily begins to question everything she thought she was fighting for.

“I’ve read there were hundreds of women who fought in that war, most of them disguising themselves as men, although it is impossible to know exact numbers since those known were either women who were discovered or outed themselves in newspaper articles or memoirs written after the war. The rest kept their secret hidden or were killed in battle without being discovered. Some bodies have been exhumed and found to be women.”

You know how every so often you can come across a book and it just ticks every one of those boxes for you? Today We Go Home is one of those books for me. A dual narrative set in both the present day and during the American Civil War, I found both eras and storylines equally as compelling and appreciated the way the author linked these two centuries apart women.

“I wonder, when I die, will I see the face of the person who kills me and feel only pain and hatred toward him? Or will I see the face of God as his welcoming arms surround me and feel nothing but his love, as Aunt Harriet says happens in Heaven? Does God welcome those who have taken the lives of others? I took a man’s life today. Possibly more than one, but one I know for certain because we were face-to-face and if I hadn’t killed him first, I would not be here writing these words. He was young. He was a person with a family waiting at home. When I sleep, he is there. Taunting me, laughing at me, begging me to spare him. Blood, screams, terror, all the horrors of battle fill my dreams and make me wake often. I feel covered by that man’s blood. I love most things about being a soldier, but I despise the killing.”

This novel pays homage to the military service of American women across the centuries. It’s a novel that doesn’t sugar coat the immense sacrifice of both women and men who have given parts of or their entire lives to the US military. It digs deep into PTSD and veteran suicide. I really appreciated the honesty of this novel as well as the realistic portrayal of what being a woman in the military is like. I particularly liked how the author shed some light on lesser known issues, such as the invisibility of women’s service.

“Even now, over a hundred and fifty years later, female veterans faced many of the same challenges that Emily did: being seen as inferior because of her gender, not being able to find work after being discharged from the military, earning less than men, becoming homeless.”

I am by no means in favour of war, but I certainly am pro respect the military and what they’re shouldering for the rest of us. Anti-war sentiment should never be extended to those who are laying their lives on the line. Their sacrifice goes beyond a tour of duty. This novel is an outstanding reflection of this and reiterates the need for understanding, compassion, and greater resources for assisting military personnel during and after service. Veterans in America have a suicide rate 50 percent higher than those who did not serve in the military; in raw terms, this equates to 22 veteran suicides per day. That is beyond shocking.

“Soldiers got home and realized they’d changed, yet their loved ones expected them to be the same. As if facing mortality on a daily basis was normal. As if watching friends die was normal. As if dedicating your life to your country and that service changing who you are at your very core was normal.”

The civil war history woven into this story made for compelling reading. Emily was a character I found much to admire about. Her courage and conviction, her yearning to be free – all entirely relatable. There are some really great themes explored throughout this novel. Today We Go Home is top shelf fiction that I don’t hesitate to recommend.

Thanks is extended to Sourcebooks Landmark via NetGalley for providing me with a copy of Today We Go Home for review.

Kelli Estes lived in the deserts of eastern Washington state and Arizona before settling in the Seattle area, which she loves so much she plans to forever live near the water. She’s passionate about stories that help us see how the past shaped who we are today, and how we all have more in common than not. She lives in the Pacific Northwest with her family.