Z The Beginning of Everything tells the story of the early years between Zelda Sayre Fitzgerald and F. Scott Fitzgerald. It’s based on the novel, Z: A Novel of Zelda Fitzgerald by Therese Anne Fowler. I haven’t read the book but I am familiar with Fowler’s work having read the novel she wrote about the Vanderbilts. Her writing focuses on examining the wives of key people from American history, a trend that’s been emerging in recent years of which I quite like.

So, this series spans the years from Zelda and Scott first meeting through to the early days of Zelda’s pregnancy with their only child. In fact, the series finishes with Scott not yet even knowing that Zelda is pregnant, so there was definitely room to move into a second series but, I’ve read that the second series was cancelled before it even began, so I guess I’m just going to be left wanting on this one. It has spurred me to mark some books to read though, ones written about Zelda, and I’d also like to read some of Zelda’s own work too, now that I have an impression of her. 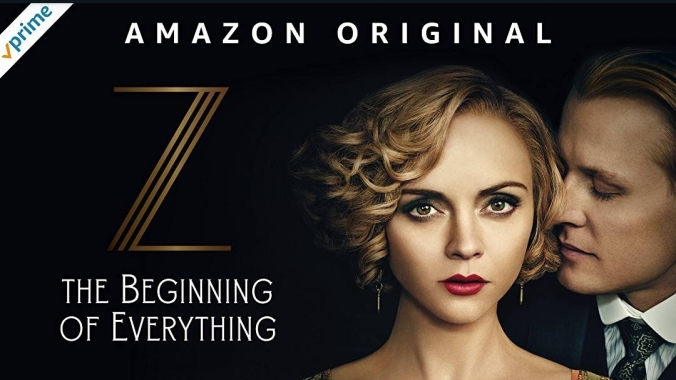 Christina Ricci plays the role of Zelda Sayre Fitzgerald, a brilliant, beautiful and talented Southern belle, the original flapper and an icon of the Jazz Age in the flamboyant 1920s. Zelda is a free spirit, who longs for a bigger and better life. When Zelda meets an unpublished writer named F. Scott Fitzgerald, a passionate, turbulent and notorious love affair emerges. This fictionalized biography pulls back the curtain on the wild parties and the music, as well the struggles, adultery, dark secrets and dashed dreams.

I’m not too sure about the adultery and dark secrets bit, but certainly the struggles and dashed dreams feature heavily. Apart from one interlude with a woman at a party where Scott appeared to have consumed gin for several days without pause, adultery was not an issue portrayed within the show. Perhaps it came later within their marriage, but it didn’t feature in the early years covered here. What was featured, and also of great interest to me, was the way in which Scott mined Zelda for material. He struck me right from the beginning as a man who wrote to be famous, not because he had any burning need to write. Indeed, after the successful release of his first novel, This Side of Paradise, he only seriously began writing another novel when sales for this one dwindled down to nothing and he had effectively run out of money. But even when he and Zelda removed themselves from the party scene so he could write, he penned a few short stories for bread and butter money but the next novel alluded him. Zelda, on the other hand, had long kept a journal filled with her thoughts, musings, passages of prose, dreams. Scott would read this daily for ‘inspiration’ but in reality, he was mining her creativity because he appeared to have very little of his own. He made an error of judgement in showing this journal to his publisher as evidence he was working hard, using Zelda’s material. His publisher then became interested in Zelda’s work from a publishing standpoint, which of course didn’t sit well with Scott. As well as a creative thief, he was also one of those people who can’t handle criticism, who crave adulation yet are besieged by insecurities that hark back to growing up with less when they felt entitled to more. In short, he was the ‘famous writer’, not Zelda.

‘What does Zelda do, Scott?’

‘Do? Why Zelda is my wife. She doesn’t have to do anything but that.’

Indeed. By the time this show wraps up, you can clearly see where everything was headed. They loved each other deeply, but Scott’s dismissal of Zelda as anything other than his muse was rather tragic. She was such a creative, effervescent, illuminated woman. Possibly more talented than her husband. I’ll have to read some of her work and come back to this thought.

Z The Beginning of Everything: 7/10

13 thoughts on “Bookish TV: Z The Beginning of Everything”