Spanning three books and set from 1942 through to the 1950s, the Belleville family series is classic Australian town and country drama, with a distinctive atmosphere of bygone days. Dramatic and absorbing, this series will take you on an emotional journey through the lives of one family, offering up a true saga opportunity that you can really sink into and get lost in for the duration. Fans of Downton Abbey and A Place to Call Home will delight in this series. It also reminded me to a certain degree of the family sagas written by the late Penny Vincenzi, but with an old world Australian feel. This series is best read back to back, in order to fully immerse yourself in the lives of the Belleville family. Highly recommended reading for fans of historical fiction and family sagas, and for those who appreciate quality Australian fiction.

Set against the backdrop of the Second World War, this is the heartbreaking story of a young girl in love, the secret she must never reveal and the family who betrayed her trust.

It is 1942. The world is at war. Julia Belleville, the headstrong only daughter of the wealthy Belleville family, falls hopelessly in love with American Army surgeon Dr Philippe Duval. When he is suddenly posted away, Julia is devastated, fearing she will never see him again.

Half a world away, Julia’s elder brother Richard is fighting for Britain, flying dangerous missions across the Channel knowing the next mission could be his last. He meets the beautiful Catherine Cavendish whose aristocratic parents disapprove strongly of the brash young Australian officer. Is he destined to find happiness with Catherine or will he be haunted forever by, Jane, the woman he left behind?

Brought up in Richard’s shadow, William Belleville resents the popularity of his older brother and when there is an unexpected death in the family, it is William who attempts to usurp his older brother’s authority and take charge of the family fortune.

And then there is the matriarch Elizabeth Belleville, whose preference for her elder son is well known, but who must endure the fecklessness of her husband, Francis, and the disappointment of a failing marriage.

Into this mix comes James Fitzroy, handsome and charming, who sets his sights on Julia. But can she ever really love him? 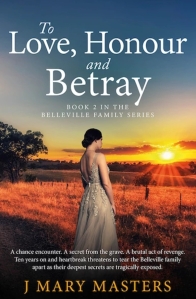 A chance encounter. A secret from the grave. A brutal act of revenge. Ten years on and heartbreak threatens to tear the Belleville family apart as their deepest secrets are tragically exposed.

It’s 10 years since the end of book 1, Julia’s Story and the stresses are beginning to show in two marriages.

Julia Belleville, now Fitzroy, continues to mourn the daughter she was forced to give up, while her husband James begins to look elsewhere.

And Catherine, Richard Belleville’s wife, restless and unimpressed by her life in Australia, embraces the unexpected events in her family that draw her back to her English life.

Hundreds of miles from the Belleville family’s grand home Prior Park, a terrible accident robs a young girl of her parents. It is only later that the consequences of this tragedy become known.

And what of Alistair McGovern, the late Francis Belleville’s bastard son? Now a young adult, he demands his share of the Belleville fortune but is spurned by the two brothers, Richard and William, who will do anything to ensure this terrible secret never reaches their mother Elizabeth Belleville. When he is finally rejected, his anger and disappointment can only lead him in one direction.

And what of Dr Philippe Duval, the man Julia loved and lost. What news from the past brings him back to Australia, a country he thought he would never visit again?

Return to Prior Park – Book 3

A final act of vengeance. An illicit liaison. A passionate affair. Against this backdrop, the Belleville family begin to rebuild their shattered lives and reclaim the future of Prior Park for the next generation.

As the Belleville family begin to rebuild their shattered lives, they believe they are safe from the madman Alistair McGovern. Yet he escapes from custody to attempt one final act of vengeance on the family. In the aftermath of this final desperate act, each of them must come to terms with the events of the past.

Julia Belleville begins to question whether she can recapture the romance of her first love, little knowing she may have a rival. Her elder brother Richard, determined to gain custody of his two sons, laments the failure of his marriage to Catherine, who is already looking elsewhere. Yet Richard too finds himself falling in love against his better judgement even as he confronts Julia’s first love Philippe Duval over his troubling behaviour.

Meanwhile, at their new home, it is William and Alice who provide the stability of a settled family life. Yet they too are caught up in the unsettled lives of the people they love.

Judith M Masters, writing as J Mary Masters, is an Australian novelist living on the Sunshine Coast, Queensland. Much of the setting for the three Belleville books derives from her early life in country Queensland. Before choosing to write full time, Judith was the publisher and founder of Australia’s most successful defence business magazine Australian Defence Magazine. Reflecting on her Belleville characters, she says: ‘I’ve become very emotionally engaged with the Belleville family. Even though they are fictional characters, they feel alive to me. I want my readers to feel the same emotional response I do.’

Thanks is extended to the author for providing me with a copy of all three titles in the Belleville family series for review.