What Empty Things Are These… 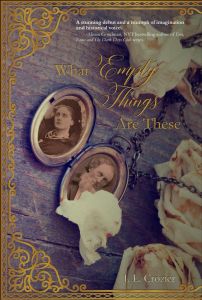 In 1860s Britain there is nothing unusual in a man beating his wife. When George Hadley’s aggression triggers his own stroke and coma, his wife discovers all she thinks of as hers is to pass to her young son Toby. Adelaide seems as powerless as her ladies’ maid, Sobriety.

Beyond the strictures of domestic and social expectation, these two women of different class remake the rules to discover what lies beneath the drapes and tassels of Victorian Britain. Life, they find, is urgent, exciting… but cheap. Even as they adventure into alleyways, a tunnel and a séance, their innocence is gone.

What Empty Things Are These is about what happens to women who look into the face of this newly industrialized and still patriarchal age. Change is everywhere, exhilarating, corrupt, terrifying. Fraud and farce abound. Spiritualists prey on the confused; women are encased in clothing that imply both modesty and sexuality; the powerful prey upon the weak. Adelaide and Sobriety, in their way, show us that every era has secrets that must be uncovered for real social progress.

But the truth of the age is encapsulated for them, in the underlying tale of the vulnerable urchin girl, the nameless victim of this pitiless society.

‘He lay there helpless in his bed, he who had been monster to my mouse.’

When Adelaide’s elderly and abusive husband suffers a stroke while beating her, she is forced out of her sheltered Victorian existence out of necessity. It doesn’t take long for her to revel in her newfound freedom and responsibilities. As her husband lays in his bed, putrefying and fading, taking his time to die with as little dignity as possible, Adelaide begins to reflect upon her current circumstances as a woman without means, for her husband’s will sees her living in poverty and dependence. Adelaide’s reflections begin to encompass the other women she is surrounded by, both in family and in servitude, and her realisation that they are all more alike within this patriarchal society than different propels her to begin writing, at first as a means of therapy and reflection, but also, over time, as a means of supporting herself.

Adelaide’s increasing responsibility towards running her household in the absence of her husband sees her jaunting about London, discovering and experiencing, growing into her own self. But on one fateful day, she and her maid, Sobriety, intercede on what they believe to be a crime. And thus begins the real journey for Adelaide, as she meets a chain of people and takes part in a series of events that all stem from this one supposedly good deed. Everything from here on in begins and ends with a nameless girl. And therein lies the beating heart of this story, for what does any Victorian woman – regardless of class – become once she is stripped of her name?

‘The world, I thought, like Messrs Hadley and Farquharson, bedecked itself, scented itself, and congratulated itself upon its success, and yet on a fine day would sweep past the huddled urchins of the street, or on a cold and howling day might stop to kick the unfortunate in order to hear their very bones snap. I turned toward the window and fancied there must be frost outside, for my breath was faintly misting in the near-dark. I blew gently, as I used to when a girl, and imagined the ragged cloud of my breath merged with the cold stillness of the room. And who is Mr Hadley? I wiped away the tear. Is he akin to Mr Farquharson, with his every word a falsehood, his home but walls around grim secrets he keeps even from his family?’

I urge you not to judge this novel by its cover. It’s not particularly appealing, which is a real shame, because the story it contains is quite excellent. It’s written as though it were a 19th century classic, the words elegantly strung together to create an authentically rendered Victorian atmosphere, precariously balanced between grim and decadent. Adelaide is a bold young woman, emerging from her gilded cage with intelligence and insight. Her observations on the oppression of her fellow women and the masculine toxicity of her withering husband are sharp and on point. What Empty Things Are These is a powerful story of female emancipation, and I highly recommend it.

‘There were times, many times, when an anchor of some sort would be of enormous use, for my world swung about and changed so that I felt I had no purchase on it, no firm grip at all.
I let myself sink into the warmth, watched the hectic flames, placed a marker in the book and closed it, drew my shawl close at a smattering against the windowpane. We were alone, yet the chaotic dance of light and shadow across the walls and ceiling might imply, if one were so minded, that this was not so. As if, I thought, a conclave of spirits fidgeted and played. I allowed myself to consider it.’

Thanks is extended to Regal House Publishing for providing me with a copy of What Empty Things Are These for review.

6 thoughts on “Book Review: What Empty Things Are These by J. L. Crozier”