‘I can split myself in two… something I have to do because of Joy and Matilde. They are my grandmothers and I love them both and they totally love me but they can’t stand each other.’ 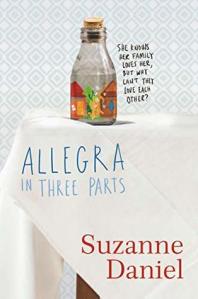 Eleven-year-old Allegra shuttles between her grandmothers who live next door to one another but couldn’t be more different. Matilde works all hours and instils discipline, duty and restraint. She insists that Allegra focus on her studies to become a doctor.

Meanwhile free-spirited Joy is full of colour, possibility and emotion, storing all her tears in little glass bottles. She is riding the second wave of the women’s movement in the company of her penny tortoise, Simone de Beauvoir, encouraging Ally to explore broad horizons and live her ‘true essence’.

And then there’s Rick who lives in a flat out the back and finds distraction in gambling and solace in surfing. He’s trying to be a good father to Al Pal, while grieving the woman who links them all but whose absence tears them apart.

Allegra in Three Parts is a truly special novel; about as near to perfect as any story can get. Those who lived through the 70s will enjoy the nostalgic trip down memory lane. I was born in 1977 though, so I was drawn more to the social history and the family dynamics, although there were many parts of the 70s that lingered into the 80s in Australia, so I could certainly connect with Allegra’s adolescence on many levels.

‘Sometimes when I get information from secretly listening in to the adults, it feels as though growing up is not so much about getting taller or smarter or stronger, but about the happy shell of being a kid being chipped away from around me one chink at a time.’

There are two things I especially appreciated about this novel. The first was the utter relief and pleasure of reading a novel with a child narrator who is not being abused. I know there is a place for these stories, but it’s not in front of my eyes. Allegra was an utter delight, smart without being precocious, loyal and kind-hearted, funny, a little bit mischievous, and an intuitive friend, daughter and grand-daughter. I loved her completely. The other thing that elevated my esteem for this novel was the positive depiction of Catholicism. It might be the first time I’ve ever read that in a novel but it made my heart sing. I had nothing but a positive Catholic primary education in a small rural school run by nuns. They were firm but always kind, compassionate, charitable, and wise. Allegra’s Sister Josepha reminded me of my own Sister Rose. She intuited things about my home life and took me under her wing, providing me with a trusted adult in what was often a tumultuous childhood. Catholic schools are not the same now without nuns, and while some people may argue with me on that, I stand by my own experiences in comparison to that of my children. Allegra’s school life and interactions with Sister Josepha were nostalgic for me in the very best of ways.

I really enjoyed the way Suzanne Daniel framed Joy, Matilde, and Rick. Both of Allegra’s grandmothers were extreme versions of each other, with Rick floating in the middle. They each loved Allegra so much, but were oblivious to how much of a burden their bitterness towards each other was for her. Joy was outwardly riding the wave of feminism, and it seemed that Matilde was dismissive of this, yet in her own way, she became an advocate for migrant women who were working from home as seamstresses and being cheated of their pay and forced to complete large amounts of outsourcing within unrealistic timelines. My grandmother was a migrant woman who worked from home in this same way, so again, I was able to connect with Allegra’s home life, memories of the sound of the sewing machine singing in my mind. I admired Matilde so much. She is evidence of the women who survived terrible atrocities, were displaced and forced to begin a new life in a very foreign land with most of their loved ones lost to Nazi oppression. Joy was a bit more airy fairy, although she offered balance against Matilde’s stern demeanour. Rick was my favourite though, caught in the middle, slowly but surely asserting himself as Allegra’s father. The dynamics within this family were really well honed.

I just found this novel so gorgeous, an utter delight that had me smiling, crying, laughing, and crying again. It’s astonishingly good for a debut. Very impressive. There is so much within this novel, so many threads to pick at and pull out for examination. The characters are wonderful, the story is authentic and I know that so many people would be able to connect with it on some level and appreciate its intent. Why isn’t it popping up in reviews more? It has very few ratings, and even fewer reviews on Goodreads. I highly recommend it. Spread the word! Allegra in Three Parts is a brilliant novel, with all the feels and then some.

Thanks is extended to Pan Macmillan Australia for providing me with a copy of Allegra in Three Parts for review.