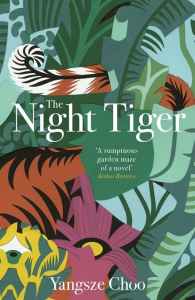 A captivating and magical story set in 1930s Malaysia about a dancehall girl and an orphan boy who are brought together by a series of unexplained deaths and an old Chinese superstition about men who turn into tigers.

In 1930s colonial Malaya, a dissolute British doctor receives a surprise gift of an eleven-year-old Chinese houseboy. Sent as a bequest from an old friend, young Ren has a mission: to find his dead master’s severed finger and reunite it with his body. Ren has forty-nine days, or else his master’s soul will roam the earth forever.

Ji Lin, an apprentice dressmaker, moonlights as a dancehall girl to pay her mother’s debts. One night, Ji Lin’s dance partner leaves her with a gruesome souvenir that leads her on a crooked, dark trail.

As time runs out for Ren’s mission, a series of unexplained deaths occur amid rumours of tigers who turn into men. In their journey to keep a promise and discover the truth, Ren and Ji Lin’s paths will cross in ways they will never forget.

‘The dream-eater is a ghost animal. If you have nightmares, you can call it three times to eat the bad dreams. But you have to be careful. If you call it too often it will also gobble up your hopes and ambitions.’

I have always been drawn to tigers. Several years ago, when visiting the Singapore Zoo, my family ended up ditching me because I was lingering too long at the tigers. They were white tigers too, so the rarest of the rare. Even watching them sleep seemed like a privilege; there are so few left on this planet. The Night Tiger was most likely always going to be a winner for me, but honestly, even with my love of tigers taken into consideration, along with a keen interest in colonial Malaysia (Malaya), I still didn’t anticipate that I would adore this novel as much as I did. It’s brilliant. All the words in the world could be tossed into this review but in the end, brilliant sums it up nicely.

‘A tiger. From time to time, the newspapers carried gruesome reports of people strangled by pythons, taken by crocodiles, or trampled by elephants. But tigers were different. Referred to as datuk, an honorary title, there were charms spoken to appease a tiger when venturing into the jungle. A tiger that devoured too many humans was said to be able to take the form of a man and walk among us.’

Yangsze Choo writes with such a candid warmth, conjuring up the atmosphere of 1930s colonial Malaya to the point where you are almost experiencing it for yourself. Her characters are uniquely rendered, so memorable, and the plot of this novel! It’s so unique, a merging of history, culture, and spiritualism, all woven together into this mystery that comes about from a series of seemingly random, yet at once connected, deaths. I’m not even going to begin to summarise the plot, that’s not my way, but suffice to say that it is both clever and unique. And so good. I didn’t want to stop reading this novel once I had begun. This is a story where connections are paramount, both plot and character, as we come to discover as the story unfolds. There are several terrific characters, but Ren stole my heart right from the beginning. What a gorgeous boy he was. I wanted so much for things to work out well for Ren.

‘Ren is benevolence isn’t it? Yi is righteousness, Li is ritual or order. Zhi is wisdom and Xin is faithfulness.’ Rawling counts them off on his fingers as he recites, ‘Without Li, what is there to distinguish men from beasts?’

The Chinese spirituality that is woven into this story was an aspect I really enjoyed, and I loved so much how the destiny of each character seemed interlinked, their actions all seemingly balanced against each other on a spiritual scale. It’s hard to describe but if you read it you’ll see straight away what I mean. But it keeps you guessing, that’s for sure, and sometimes I was certain I knew who was the villian and who was not, only to have my theory tipped on its head in favour of something far more clever.

‘It’s the fickleness of events that frightens him, as though he only has to say, “I wish it weren’t so!” and the pattern reorders to suit him. Like a dark fairy tale, where all wishes, however evil and stupid, are granted.’

There is a wealth of history threaded into this story and anyone who has even a passing interest in Malaysia as a British colony will enjoy what The Night Tiger has to offer. I’m not sure I will ever regard a train station in quite the same way again and my reverence for tigers has peaked far beyond what it was before. And then there’s the dream walking, the connection between the living and the dead in a dreamscape; I loved these parts of the story.

‘Chinese people have an aversion to suddenly waking people from sleep, in case the soul separates from the body.’

Of course, I really want to go to Malaysia now, even though I know it won’t be the same, because it’s 90 years on from when this novel is set, but even so, I loved my time in Singapore and envisage I’d feel the same about Malaysia. In the meantime, I have The Night Tiger to revisit. It’s one of my Page by Page Book Club picks for May and I’m really looking forward to sharing it with the other readers. The Night Tiger was the April pick for Reece Witherspoon’s Hello Sunshine Book Club and over on her website there’s a terrific essay written by Yangsze Choo on the inspiration behind The Night Tiger. I recommend checking it out if you are at all interested in reading the novel. I didn’t need much convincing, but I still enjoyed peering behind the story. The Night Tiger is a truly unforgettable novel, one I hope will be immortalised for all time, never out of print and always available to readers young and old.

Yangsze Choo is a fourth-generation Malaysian of Chinese descent. After receiving her undergraduate degree from Harvard, she worked as a management consultant before writing her first novel, the New York Timesbestseller The Ghost Bride. She lives in California with her family and several chickens and loves to eat and read (often at the same time). The Night Tiger would not have been possible without large quantities of dark chocolate.

11 thoughts on “Book Review: The Night Tiger by Yangsze Choo”