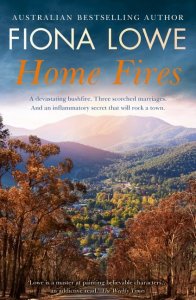 When a lethal bushfire tore through Myrtle, nestled in Victoria’s breathtaking Otway Ranges, the town’s buildings – and the lives of its residents – were left as smouldering ash. For three women in particular, the fire fractured their lives and their relationships.

Eighteen months later, with the flurry of national attention long past, Myrtle stands restored, shiny and new. But is the outside polish just a veneer? Community stalwart Julie thinks tourism could bring back some financial stability to their little corner of the world and soon prods Claire, Bec and Sophie into joining her group. But the scar tissue of trauma runs deep, and as each woman exposes her secrets and faces the damage that day wrought, a shocking truth will emerge that will shake the town to its newly rebuilt foundations…

With her sharp eye for human foibles, bestselling author Fiona Lowe writes an evocative tale of everyday people fighting for themselves, their families and their town – as only this distinctively Australian storyteller can.

This is the first novel by Fiona Lowe that I’ve read, although I have eyed off her previous two (Daughter of Mine and Birthright) on more than one occasion. I’m not a big reader of contemporary fiction though, and these novels are thick, really thick, so I never ended up committing to one. I did really like the sound of Home Fires though, the focus on a community recovering from a devastating bushfire appealing to my current interests for contemporary reading. It was a case of the right book arriving at the right time.

Home Fires is quite an expansive novel, sweeping back and forth to points in time before the bushfire and then to eighteen months after the bushfire. The focus is primarily on three particular women within the community, but we are also offered the voice of their respective partners and there are plenty of other characters contributing through interactions and conversations, so in terms of cast, this novel has a big one. But I think this was quite necessary in a story such as this, a community focused one. A bushfire has such an impact on so many people, to have narrowed the story down to only a couple of people in isolation would have had less impact. The characters certainly had a realism to them, to the extent that there were a few that really got me offside early on. Some of the men in this novel are not very pleasant, one in particular downright monstrous, and even taking into account the experience of trauma, I’m pretty much of the opinion that these men were already jerks beforehand and the trauma of the bushfire and the losses they encountered just seemed to afford them with an excuse to magnify their bad behaviour.

I really struggled with Claire, to be honest, even though she was a main character and the norm is to love those. For the majority of the book she irritated me, always being late (I find chronic lateness a symptom of disrespect to the people you are always late for), baiting Bec at every opportunity (just grow up already and act like an adult), and never just having a proper conversation with her partner Matt. On the topic of Matt, he really annoyed me as well. I mean, seriously, talk about going from A to Z in 60 seconds flat. He mentions he’d like to try for a baby and without even waiting to hear Claire’s response, he begins to tell people ‘they are trying for a baby’, and then becomes really intense and controlling in terms of monitoring Claire’s period and restricting her alcohol – ughh! The circumstances that these two got together under never really bodes well, I wasn’t exactly championing for their success, to be honest. Matt just struck me as a very childish man who was not only insensitive to Claire’s losses but also a bit thick, to be honest. I can’t believe he couldn’t just see what was right in front of him, on a number of fronts. It wasn’t until the last 150 pages or so that I actually began to tolerate Claire. I did like Bec and Sophie a lot more, Julie was great too, and I also quite liked Erica, the newbie to town. Bec’s story was pretty disturbing, I thought Fiona did a stellar job at plotting this out and building the abuse to breaking point. Very tragic. But essentially, my likes and dislikes aside, these people were really well fleshed out and the fact that I was annoyed at them so much just indicates how much like real life people they actually were!

Bushfire is a big part of Australian life and the value of this novel lies in its close examination on the effects, not only on the individual, but on the communities as a whole, after the bushfire. Not just in the weeks after, but in the months and years. We often think that as long as we are insured, we can rebuild. But Fiona explores how this is not always the case. Insurance companies can reclassify areas, deeming them high risk, specifying that rebuilds need to have all sorts of fire resistance materials and additions that cost far more than the payout. Banks can then refuse to further mortgage because of the high risk tag, so people can effectively be left homeless with only a block of land and a payout that won’t cover much more than a shed. Sophie’s situation was a real eye opener, and I felt for her, so much, the hopelessness of it all and the stress that would push you to breaking point. Combined with what Josh, Sophie’s husband, had experienced during the bushfire, it was a wonder this family was still limping along. Absolutely tragic. And then there’s the personal losses, not only of property and livestock, but of family, friends and acquaintances. As a study on the effects of bushfire on a community, this novel provides an explicit view. Towards the end of the novel, we revisit the fire itself, and Fiona switches the narrative to present tense for this, ramping the tension and putting the reader right smack bang into the inferno. It was quite frightening, witnessing what the characters had gone through, particularly Josh. Fiona has clearly done her anecdotal research extensively for this novel. It was very well rendered.

There were some other really good themes that cropped up too, around the loss of businesses and income; the effect on teenagers with nothing left to do but indulge in risky behaviour; the loss of tourism and its extensive impact on a town already in crisis; governments building community centres that will stand empty and unused because there’s still so many unemployed and partially homeless residents in town; and even the awkwardness of new people moving to town post bushfire, being excluded from consideration as a local on account of not having experienced the loss associated with the disaster, treading on thin ice no matter what you do or say. So many themes, both social and emotional, individual and community in scope; there was a lot going on, that’s for sure.

All in all, Home Fires is a good read but I did feel its length. In the middle section, it seemed to chase its own tail for a bit, going back and forth with a lot of repetition in the present day, before picking itself back up in the last 150 pages. It’s definitely worth pushing through. Recommended to fans of contemporary fiction who like their reads to have a social conscience and a community focus.

Thanks is extended to AM Publicity for providing me with a copy of Home Fires for review.

Fiona Lowe has been a midwife, a sexual health counsellor and a family support worker; an ideal career for an author who writes novels about family and relationships. She spent her early years in Papua New Guinea where, without television, reading was the entertainment and it set up a lifelong love of books. Although she often re-wrote the endings of books in her head, it was the birth of her first child that prompted her to write her first novel. A recipient of the prestigious USA RITA award and the Australian RuBY award, Fiona’s books are set in small country towns and feature real people facing difficult choices and explore how family ties and relationships impact on their decisions. When she’s not writing stories, she’s a distracted wife, mother of two ‘ginger’ sons, a volunteer in her community, guardian of 80 rose bushes, slave to a cat and is often found collapsed on the couch with wine. You can find her at her website, fionalowe.com, and on Facebook, Twitter and Goodreads.