To celebrate the release of her latest novel, Esther Campion joins me today for Behind the Pen, as part of her blog tour for The House of Second Chances. Over to you Esther…

What is your favourite…and why…

Tracey Pope is in both of my novels. She is the best friend of one of the main characters, Ellen, and the kind of woman we could all do with in our lives. I was sitting at the school playground in Port Lincoln, when one of the mums walked past, the ringlets of her gorgeous auburn hair bobbing as she rounded up her brood and herded them to her car. She was the inspiration for Tracey. I took the hair and created a feisty, irrepressible character who helps Ellen get through the lows and is always on hand to celebrate the highs.

There’s a scene in The House of Second Chances where Colette, the interior designer, goes to collect Shane, the Scottish nephew of her boss who has landed in Cork on the premise of ‘helping’ in the business. She is about to lay in to the young man about his tardiness on the job and untidiness in his uncle’s house, when she spots something that makes her hold her tongue and question her harsh judgement of him.

Out of Africa. Robert Redford, Meryl Streep, Africa … heaven in a movie! I was fortunate enough to visit Karen Blixen’s house on the outskirts of Nairobi when I travelled to Kenya in my early twenties. ‘I had a farm in Africa, at the foot of the Ngong Hills …’ has stayed with me all this time.

I recommend Rise by Ingrid Poulson, a self-help book that keeps me sane in wobbly moments.

Handbags I’m afraid. Sshh … don’t tell my husband. The last thing I want to do is prove him right on that one!

Drink that you enjoy everyday?

Water. After living in South Australia for five years, the first thing I thought of when I drank tap water in Tasmania was ‘Is this champagne?’ It’s fresh, clear, super good for you and I love it. I am also grateful to live in a place where it is available in abundance, and, as we all know, millions of people on our planet are not so lucky.

Anything with stodgy carbs – beer, bubbles, chocolate, hot chips, bread and butter, Nutella … no favourites. Love all the baddies.

In bed reading with my pets asleep on the duvet. Okay, not the horses!

I admire my eldest daughter who has lived independently since she was eighteen, mostly interstate where she works with vulnerable children, doing her best to make a positive difference in their lives.

It has to be summer as people have more time for fun. I love sea swimming and jetty jumping but dread bushfires, so for me, it is a time to be mindful while still making the most of good weather and opportunities to be with family and friends. 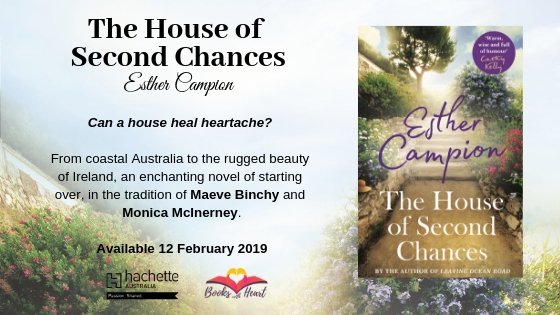 The House of Second Chances 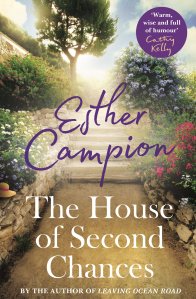 Can a house heal heartache? From coastal Australia to the rugged beauty of Ireland, an enchanting novel of starting over, in the tradition of Maeve Binchy and Monica McInerney

Their grandmother’s stone cottage was always a welcome retreat in the childhood summers of Ellen and Aidan O’Shea. After a trip home from Australia, Ellen is keen to bring the neglected property back to its former glory and enlists the help of her dear friend and one of Ireland’s top interior designers, Colette Barry.

Aidan is already begrudging the work on the house he has avoided for nearly twenty years. The last thing the builder needs is an interior designer who seems to do nothing but complicate his life. With their own personal heartaches to overcome, will Aidan and Colette find the courage to give the house and themselves a second chance? 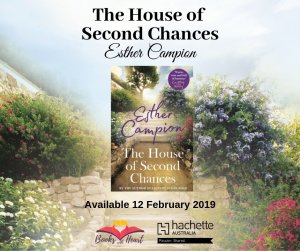 Buy The House of Second Chances:

Esther Campion is from Cork, Ireland and currently lives in north-west Tasmania. She attended North Presentation Secondary School in Cork and has degrees from University College Cork and the University of Aberdeen, Scotland. Esther and her Orcadian husband have lived together in Ireland, Scotland, Norway and South Australia. They have two grown-up children in Adelaide and the youngest at home in Tassie. Esther loves sharing her life on a small property with an over-indulged chocolate Labrador, a smoochy cat and a couple of ageing mares, all of whom she firmly believes are living proof that dreams really can come true. The House of Second Chances is Esther’s second novel, following Leaving Ocean Road.

6 thoughts on “Blog Tour: Behind the Pen with Esther Campion”