In my bid to be super organised with book club this year, I bring you February’s titles in the last week of January. My aim is to do this each month.

Discussion will commence in the Page by Page Facebook group towards the end of February. If you’re not on Facebook, please feel free to revisit this post and share your reading thoughts in the comments section below.

Gone by Midnight by Candice Fox

Crimson Lake is where bad people come to disappear – and where eight-year-old boys vanish into thin air . . .

On the fifth floor of the White Caps Hotel, four young friends are left alone while their parents dine downstairs. But when Sara Farrow checks on the children at midnight, her son is missing. The boys swear they stayed in their room, and CCTV confirms Richie has not left the building. Despite a thorough search, no trace of the child is found.

For Ted, the case couldn’t have come at a worse time. Two years ago a false accusation robbed him of his career, his reputation and most importantly his family. But now Lillian, the daughter he barely knows, is coming to stay in his ramshackle cottage by the lake.

Ted must dredge up the area’s worst characters to find a missing boy. And the kind of danger he uncovers could well put his own child in deadly peril . . .

Half Moon Lake by Kirsten Alexander

In 1913, on a summer’s day at Half Moon Lake, Louisiana, four-year-old Sonny Davenport walks into the woods and never returns.

The boy’s mysterious disappearance from the family’s lake house makes front-page news in their home town of Opelousas. John Henry and Mary Davenport are wealthy and influential, and will do anything to find their son. For two years, the Davenports search across the South, offer increasingly large rewards and struggle not to give in to despair.

Then, at the moment when all hope seems lost, the boy is found in the company of a tramp.

But is he truly Sonny Davenport? The circumstances of his discovery raise more questions than answers. And when Grace Mill, an unwed farm worker, travels from Alabama to lay claim to the child, newspapers, townsfolk, even the Davenports’ own friends, take sides.

As the tramp’s kidnapping trial begins, and two desperate mothers fight for ownership of the boy, the people of Opelousas discover that truth is more complicated than they’d ever dreamed . . .

Half Moon Lake is Kirsten Alexander’s compelling debut novel, about the parent-child bond, identity, and what it means to be part of a family.

The Girl From Eureka by Cheryl Adnams 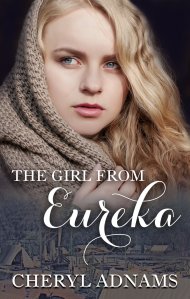 On the sun-drenched goldfields of Eureka, a wild colonial girl and an honour-bound soldier will break all the rules to claim a love worth more than gold …

Gold miner Indy Wallace wants nothing more than to dig up enough gold to give her mother an easier life. Wild and reckless, and in trouble more often than not, Indy finds herself falling for handsome, chivalrous, British Army Lieutenant Will Marsh. But in the eyes of immigrant miners, soldiers are the enemy.

Will has been posted to Ballarat with a large contingent of Her Majesty’s Army to protect the Crown gold and keep the peace. But once he meets rebellious Indy, he doubts he’ll ever be at peace again. As Will and Indy’s attraction grows, their loyalties are tested when the unrest between miners and the military reaches breaking point.

On opposite sides of the escalating conflict, can their love survive their battle of ideals? And will any of them survive the battle of the Eureka Stockade?

Saving You by Charlotte Nash

In their tiny pale green cottage under the trees, Mallory Cook and her five-year-old son, Harry, are a little family unit who weather the storms of life together. Money is tight after Harry’s father, Duncan, abandoned them to expand his business in New York. So when Duncan fails to return Harry after a visit, Mallory boards a plane to bring her son home any way she can.

During the journey, a chance encounter with three retirees on the run from their care home leads Mallory on an unlikely group road trip across the United States. Zadie, Ernie and Jock each have their own reasons for making the journey and along the way the four of them will learn the lengths they will travel to save each other – and themselves.

4 thoughts on “Book Club for February”