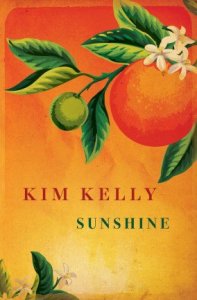 A tale of longing, loss and growing love under the bright Australian sun.

It’s 1921 and the Great War has left in its wake untold tragedy, not only in lives lost, but in the guilt of survivors, the deep-set scars of old wounds and the sting of redoubled bigotries.

In the tiny hamlet of Sunshine, on the far-flung desert’s edge, three very different ex-servicemen – Jack Bell, an Aboriginal horseman; Snow McGlynn, a laconic, curmudgeonly farmer; and Art Lovelee, an eccentric engineer – find themselves sharing a finger of farmland along the Darling River, and not much else. That is, until Art’s wife Grace, a battle-hardened nurse, gets to work on them all with her no-nonsense wisdom.

Told with Kim Kelly’s inimitable wit and warmth, Sunshine is a very Australian tale of home, hope and healing, of the power of growing life and love, and discovering that we are each other’s greatest gifts.

It’s a rare gift to discover an author who writes with such a striking sense of atmosphere and sublime instinct. Such is the storytelling of Kim Kelly, who just never misses a beat ever. In her latest novella, Sunshine, she takes us back to Australia, post WWI where we meet Jack, Snow, Art and Grace, four people who each carry the burden of having been on the frontlines of the war.

‘Too painful being so outstandingly intact on the outside and so smashed on the inside; so unspeakably monstrous all over.’

There are so many themes threaded into the narrative of Sunshine, both political and social. This is what I love about Kim’s writing. She breathes history into each of her novels with love and clarity. You aren’t just treated to a story about four people piecing their lives back together after WWI. In Sunshine, you are fully immersed into the post war period of Australian history, privy to the political environment, the social movements, the policies being enforced, the laws that were in existence. This is all woven so tightly into the characterisation that the imparting of all of these historical facts is seamless. There’s some painful history aired out within the pages of Sunshine. Kim is never one to shy away from the truth, preferring accuracy over gloss and fluff, which of course, is one of her strengths as an Australian writer. Her candid approach is all the more refreshing for its lack of pretension.

‘What creature is a man that one in such deep grief, in such need of having his hand held, had not had that simple need met? She felt the revelation rise inside her and with it her own tears. She kept hold of his hand; she poured all the strength of her affection and respect into this touch, and his tears streamed as she did, blotting into the soft blue flannel of his pyjama shirt.’

At its heart, Sunshine is a love story. Not just between Art and Grace, but between friends, and for the Australian landscape, with its wide open spaces, unique wildlife and endless sunshine. It’s a story about uncovering the beauty, clearing away the rot and saying, “This is what we have. Now what are we going to do with it? How are we going to make this work for everyone?” Grace was such a perceptive character, I loved how she viewed Australia through her English gaze and saw it with such unwavering clarity. There are many deeply felt moments throughout Sunshine and they all seemed to orbit around Grace, as though she was the sun that had risen after the dark days of the war. She was a remarkable woman with an inner strength that set her apart. I loved how she made a decision each day to embrace life, despite her own inner demons. She took such pleasure in everything around her and above all acted with kindness and respect towards everyone she encountered; she’s the type of person that I strive to be.

‘She’d swept everything twice already – all she’d done that first week since they’d arrived was sweep and scrub and scour, the house revealing more and more of its beauty each time, in its tessellated tiles of red diamonds and black stars, its ornate cornices scallop-edged and stuffed with blooms of every kind, garlands carved into every internal door, and tinier reflections of same delicately rendered upon every porcelain handle – but almost three decades’ accumulation of dust, bird-doings and dead insects would take another few rounds, at least.’

Sunshine is the sort of historical fiction that I want everyone to read – young, old and all those in-between. When you read history like this, it becomes all too apparent that we have come so far as a nation, in so many ways, yet in other areas, well, just like in cleaning out the old house, it will take another few rounds, at least.

Thanks is extended to the author for providing me with a copy of Sunshine for review.

Kim Kelly is the author of eight novels exploring Australia and its history. Her stories shine a bright light on some forgotten corners of the past and tell the tales of ordinary people living through extraordinary times. An editor and literary consultant by trade, stories fill her everyday – most nights, too – and it’s love that fuels her intellectual engine. In fact, she takes love so seriously she once donated a kidney to her husband to prove it, and also to save his life. Originally from Sydney, today Kim lives on a small rural property in central New South Wales just outside the tiny gold-rush village of Millthorpe, where the ghosts are mostly friendly and her grown sons regularly come home to graze.