The Cottage at Rosella Cove…

Why had the house stayed empty so long? Why had it never been sold?

LOST
Nicole has left her city life for the sleepy town of Rosella Cove, renting the old cottage by the water. She plans to keep to herself – but when she uncovers a hidden box of wartime love letters, she realises she’s not the first person living in this cottage to hide secrets and pain.

FOUND
Ivy’s quiet life in Rosella Cove is tainted by the events of World War II, with ramifications felt for many years to come. But one night a drifter appears and changes everything. Perhaps his is the soul she’s meant to save.

FORGOTTEN
Charlie is too afraid of his past to form any lasting ties in the cove. He knows he must make amends for his tragic deeds long ago, but he can’t do it alone. Maybe the new tenant in the cottage will help him fulfil a promise and find the redemption he isn’t sure he deserves.

Welcome to the cottage at Rosella Cove, where three damaged souls meet and have the chance to rewrite their futures.

‘As she scraped a small piece off she noticed something underneath. Not the plain old walls she’d uncovered in other parts of the cottage, but something patterned. She scraped another jagged strip off the wall. Yes. Beneath the flocked terror was another layer of wallpaper. Surely this constituted crimes against humanity.’

It seems I’m destined to award all of Sandie Docker’s novels with five stars. Her stories just seem to reach right out of the page to grab me, holding on tight until the very last word. There’s a warmth and humour infused that I’m beginning to recognise as trademark for Sandie, and she skilfully balances this out against the more heart-wrenching moments, of which there are plenty. Sandie seems to know just when to apply the pressure to her characters and when to release; it’s a gentle ebb and flow that takes you on a very special journey.

‘Nowhere. There was nowhere for her to go. No friends to go to. No money to take her anywhere. No choice. But she couldn’t stay there. She walked out into the night.’

Nicole is at the lowest point in her life when she arrives at Rosella Cove. She has been shredded by her relationship with her former fiancé, the insidious details of which unfold as her stay at the cottage progresses. In uncovering a box of letters written by the previous inhabitant, Ivy, Nicole begins to make sense of her own life within the context of Ivy’s story from the past. Charlie, the gruff old man who lives in the boat shed on the cottage property, provides the third point to this life affirming triangle.

‘She was happily having non-conversations with an irate hermit, and her most intimate relationship was with a mysterious woman who’d been dead for four decades. It was not exactly the life she’d imagined for herself, but here she was.’

Through its exploration of domestic violence, alcoholism, and the debilitating effects of loneliness, The Cottage at Rosella Cove is a deeply moving read, a joyful snapshot of human connection and the way people can save each other through kindness and empathy. Sandie has a deep understanding of contemporary social issues and she weaves these into her story with finesse. I highly recommend The Cottage at Rosella Cove.

Thanks is extended to Penguin Random House Australia for providing me with a copy of The Cottage at Rosella Cove for review. 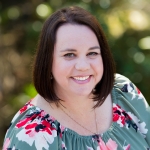 Sandie Docker grew up in Coffs Harbour, and first fell in love with reading when her father introduced her to fantasy books as a teenager. Her love of fiction began when she first read Jane Austen for the HSC, but it wasn’t until she was taking a translation course at university that her Mandarin lecturer suggested she might have a knack for writing – a seed of an idea that sat quietly in the back of her mind while she lived overseas and travelled the world. Sandie first decided to put pen to paper (yes, she writes everything the old-fashioned way before hitting a keyboard) when living in London. Now back in Sydney with her husband and daughter, she writes every day.