Now an adult with three children, bank teller Michael Banks learns that his house will be repossessed in five days unless he can pay back a loan. His only hope is to find a missing certificate that shows proof of valuable shares that his father left him years earlier. Just as all seems lost, Michael and his sister receive the surprise of a lifetime when Mary Poppins — the beloved nanny from their childhood — arrives to save the day and take the Banks family on a magical, fun-filled adventure.

Mary Poppins Returns is absolutely glorious, uplifting and joyous, filled with nostalgic references to its predecessor while still maintaining its own presence. My daughter and I have been highly anticipating the release of this film, so we wasted no time at all in lining up on the first day of its release (out here) to see it. I have been a fan of the original Disney production of Mary Poppins all my life and its probably fair to say I brainwashed my daughter into loving it from an early age as well. We both enjoyed Mary Poppins Returns and both agree that Disney has done an excellent job at bringing this beloved story to life for a whole new generation of viewers. Is it over the top? Yes, but so was the original. And anyway, that’s kind of the whole point of Mary Poppins. She’s eccentric, it’s not meant to be realistic, and it’s a musical. All of those point clearly to a heavy sprinkling of over the top spectacular viewing. I loved it all the more because it retains the elements of the original that made it so beloved.

While the storyline is new and the songs are all different, Mary Poppins Returns does tether itself to its predecessor in a way that is deeply nostalgic for fans of the original. Set during the 1930s, there’s a clever mix of old world classic threaded with a modern edge, giving it an accessibility to audiences both new and old. I loved the scene with the lantern lighters, their old school tapping and show dancing intermingling with cyclists doing tricks and aerials on ramps built into the rooftops. This scene is of course the Mary Poppins Returns version of ‘Chim-Chimney’. It’s at once familiar, but also different. This element of then and now plays itself out over and over, which is a delight for old fans like me, but it doesn’t affect the enjoyment of new viewers who are unlikely to have seen the first Mary Poppins film. And no, you don’t need to have seen the first film in order to enjoy this second. However, if you have seen the first, and you didn’t like it, then you’re unlikely to get much out of this one. The best way I can put it is: same but different.

There are two special appearances in Mary Poppins Returns that warrant a mention. The first is Dick Van Dyke, who at 93 years of age, dances on a desktop as sprightly as he did 54 years ago when he played Bert the chimney sweep. He plays a different character this time around, but again, to me, his inclusion in the new film is a heavy nostalgic nod that is nothing short of delightful, and yes, his eyes do still twinkle with merriment. Angela Lansbury, also 94 years of age, plays the Balloon Lady. While she was not in the original, she was in Bedknobs and Broomsticks, which with its mix of live-action and animation, was so similar to Mary Poppins that many people of my vintage would remember the two films hand in hand. In Mary Poppins Returns, Lansbury’s character, the Balloon Lady, serves the same function as the Bird Lady in the original Mary Poppins, but its also a nod to Bedknobs and Broomsticks in the sense that she is playing the same type of character in both films, and her ending line to Mary Poppins as they watch everyone float around hanging from balloons is a nod to both of those films, with their themes of childhood joy and imagination, which dwindles away once we hit adulthood.

“The grownups always forget by morning.”

Meryl Streep also warrants a mention. She is utterly fabulous as Mary’s cousin Topsy Turvy. And Colin Firth plays a great villain, very dapper indeed in his pinstripes. And what of Emily Blunt, who took the greatest risk of all in playing such an iconic and beloved character? Well, to quote Mary Poppins herself, she was:

Throughout this film I had a permanent smile on my face and I felt a true sense of joy – to be able to watch a film that is so timeless, tethered so strongly to a beloved childhood classic, yet still offering something new, is quite rare. It’s not for everyone, but it certainly fulfilled my expectations. I can’t wait now for it to come out on DVD so that I can pop it onto my shelf next to its predecessor and have a Mary Poppins marathon any old time I like. 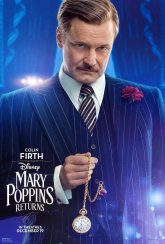