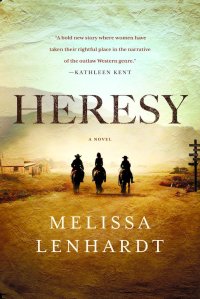 After being run off their ranch by a greedy cattleman, their family is left destitute. As women alone they have few choices: marriage, lying on their backs for money, or holding a gun. For Margaret and Hattie the choice is simple. With their small makeshift family, the gang pulls off a series of heists across the West.

Though the newspapers refuse to give the female gang credit, their exploits don’t go unnoticed. Pinkertons are on their trail, a rival male gang is determined to destroy them, and secrets among the group threaten to tear them apart. Now, Margaret and Hattie must find a way to protect their family, finish one last job, and avoid the hangman’s noose.

“I didn’t think of men as individuals, but as a toxic hole whose only goal was to protect their power by keeping women down, subservient.”

The last time I read a western would have been The Quick and the Dead. They’ve never really factored high on my want to read list, and I have zero interest in western romances. But there was a bit of a run on western movies in the 90s and I used to enjoy them a lot. Heresy has all the elements needed to bring a western back onto the big screen. I truly think this novel would make a terrific movie. It’s got grit, a clever plot, and a set of memorable characters. And above all, it doesn’t romanticise the ‘wild west’. Nothing about Heresy is pretty, but it’s a cracking good read.

“That happened then, miners, farmers, businessmen buying wives to do the housework and spread their legs when demanded, squeeze out some children to put to work and make miserable by and by. Pioneering was a hard life for women. They gloss over it in the movies. Make the sodbuster some handsome, good-hearted fella. Make the cowboy honourable. Those types of men were thin on the ground in the West, let me tell you.”

Heresy tells the story of a fictional gang of female outlaws in the ‘wild west’ of America during the 1870s. Each of these women have been betrayed and damaged by men. Each of them want to live out their lives on their own terms. They are as badass as women get, but their loyalty to each other runs deep. They’re a family, and no one is going to get in the way of that bond. This novel is unapologetically feminist. It’s violent and sometimes disturbing. I loved every bit of it. It’s everything you want in a western and then some.

“Taking a man’s life is a sobering proposition, even if it is in the service of saving someone else’s. It’s been a few weeks. I’m over it now.”

The way this novel is structured was fantastic. It’s told as though it’s a true story, a non-fiction book being written by an historian and we are privy to her primary sources through journals, interview extracts, newspaper articles, essays and even a podcast. It’s an inventive way to tell a story, using fictional mixed media like this, and for me, it really worked. There were a couple of times, particularly towards the end when the action was ramped up, that I found it a tad repetitive when we would revisit a scene from a different perspective, but overall, I enjoyed this structure of storytelling a lot.

“The challenge was quickly agreed on: One job before the first snow. No killing or violence. Biggest take wins. Winner gets the ranch. My ranch. Loser leaves the area and finds another place to outlaw. Let me tell you right now: we’re going to win this bet, we’re going to shut Jed Spooner’s mouth, and we’re going to finally get the credit for the jobs we’ve done.”

There’s a lot of beauty to be found within the pages of Heresy, within the relationships between the women, the bond between the women and their horses, and the appreciation of the simple things that they each were seeking out of life. Melissa Lenhardt has a real way with words and there is some seriously gorgeous writing throughout this novel, as well a fair share of moments that had me welling up. I like this new angle on westerns, the feminist western if you like, and I’m keen to check out Melissa Lenhardt’s backlist. One of the titles is called ‘Sawbones’. How awesome is that title? I love it. I can highly recommend Heresy, particularly to those that don’t mind their fiction hard hitting and intelligent, with moralistic themes woven throughout the narrative. It is above all else a truly entertaining read, as wild west as you could get.

“My senses have been highly attuned to the world around me, as if longing to take everything in so the memory of it will stay with me, manifest itself in the afterlife. As if I deserve to be surrounded by things I love. As if I deserve heaven.”

Thanks is extended to Redhook via NetGalley for providing me with a copy of Heresy for review.

Melissa Lenhardt is the author of Heresy, the Sawbones historical fiction series, and the Jack McBride mystery series. Her debut mystery, Stillwater, was a finalist for the 2014 Whidbey Writers’ MFA Alumni Emerging Writers Contest, and Sawbones, her historical fiction debut, was hailed as a “thoroughly original, smart and satisfying hybrid, perhaps a new sub-genre: the feminist Western” by Lone Star Literary Life. She lives in Texas with her husband, two sons, and two Golden Retrievers.
https://www.melissalenhardt.com