The Book of Daniel – From Silverchair to DREAMS… 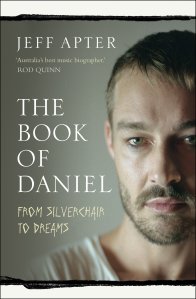 The highs, lows and incredible life of the enigmatic Daniel Johns, from Silverchair to DREAMS

When Silverchair shuddered to a halt in 2011, there was no swan song, no farewell tour, just a brief statement and then they were gone – after more than fifteen years of brilliant music, five hit albums, legions of fans, millions of record sales, scores of awards and the odd controversy. Three teenagers from Newcastle had taken the world by storm within the time it typically takes most bands to record their first single. Over their stratospheric career, Daniel Johns developed into a performer and songwriter with few peers in modern music.

Shortly after the break-up of the band, Johns’s marriage to pop star Natalie Imbruglia also ended. He became the focus of sordid headlines and whispers of wayward behaviour. People feared what might happen next.

But at the same time a new Daniel Johns emerged. His debut solo album, Talk, appeared to rapturous reviews in 2015 and raced to the top of the Australian charts, and then 2018 saw the advent of DREAMS, his long-awaited collaboration with Luke Steele. This was a vastly different Daniel Johns to the grungy, guitar-blazing teen of the 1990s. His new sound and image were sophisticated, brilliant and sexy as hell. It was a remarkable creative makeover, perhaps the most ambitious ever undertaken by an Australian rockstar. Former rockstar.

The Book of Daniel documents how the reclusive Johns also battled many personal demons, including life-threatening anorexia and crippling reactive arthritis. Drawing on more than fifteen years of documenting the life and times of Daniel Johns, author Jeff Apter has brought his story to life, revealing the struggles and triumphs of one of Australia’s most distinctive and dazzling talents. The book also includes a collection of exclusive photographs of Johns by eminent rock photographer Tony Mott.

When Silverchair burst onto the Australian music scene in September of 1994 with Tomorrow, I was reaching the end of my final year of high school. We were deep into the Grunge era at that point of the 90s and it was all about Nirvana and The Smashing Pumpkins for me. Despite Silverchair having a sound that resonated to my (then) music tastes, I deliberately shunned them, because they were kids, and there was no way I was going to be caught fan-girling over a trio of fourteen year old boys. But with each new album, the Silverchair sound kept evolving and their final album, Young Modern, was eons away from Frogstomp. When I consider the music that has defined certain eras of my life, Silverchair feature pretty heavily. But there’s so much more to Daniel than Silverchair. Over the years, both during band breaks and post Silverchair, he’s worked on a host of differentiated music projects. When Daniel Johns made his comeback in 2015 as a solo artist with Talk, I was listening to it from the start. His sound had evolved dramatically, but so had my music tastes. This year he’s collaborating with Luke Steele as Dreams. I love how he’s constantly evolving and reinventing himself, it’s just fantastic and incredibly inspirational. Although I will say, Miss You Love and Straight Lines remain my favourite ways to listen to Daniel’s voice.

‘And what about hobbies: did he have any? “My hobby became my job when I was really young.”’

As I’ve been reading this book, I’ve been thinking a lot about Daniel Johns, Ben Gillies and Chris Joannou as fourteen year olds becoming instant rockstars. My eldest son is fourteen, and the way these boys are described in the book has me thinking that they were no more or less mature than what my son is; they were just regular fourteen year old boys with a short attention span who loved to play loud music, clown around, skate, and surf. And I look at my son and imagine him with all of that instant adoration, all of that pressure and scrutiny, and I am astounded that these boys made it through and stayed together as a band for as long as they did. That they each had extremely supportive parents is very fortuitous, and their band management was pretty solid too. That there may have been issues along the road should really come as no surprise. For Ben Gillies and Chris Joannou, fame seemed easier for them to come at, but for Daniel, it was a very different story.

‘When we started out, at thirteen or fourteen, we were exactly the same. But as we grew up and went through the same kind of experiences, it’s interesting how it affected us and shaped our personalities. We went through the whole being-famous-and-going-through-adolescence thing together, and came out the other side complete opposites. I’ve no idea how it happened.’

He seems to me, from this account, to be an introvert. An insanely talented artist who was repelled by fame, repelled by the adoration; utterly terrified of public life and plagued by ill-health. He hated touring and performing live. An artist who was forever seeking to leave Tomorrow behind. His personal story is sad, creatively inspirational, yes, but ultimately heartbreaking, because in truth, he still doesn’t seem to have it all together. He’s only two years younger than me, but the whole time I was reading this book, the mother in me kept rearing its head. He’s been through so much: astronomical highs at an extremely young age; health challenges that would have levelled many. And yet, here he is, still producing music, completely on his own terms.

‘The curious case of Daniel Johns. A rebel teen at 40 years old and an amazing artist at 24.’

Jeff Apter is a skilled biographer. The Book of Daniel is a fact based biography, but Jeff has taken all of these facts, along with anecdotes and interview extracts, and interwoven them with seamless precision. The entire book reads like a story and I enjoyed that it was presented chronologically. I’m not a fan of memoirs but biographies, when written well, I do enjoy – especially music ones. Jeff’s extensive knowledge of the Australian music industry, combined with his clear ability to write well, has resulted in a polished biography that is intimate without being intrusive, and entertaining without being gratuitous. There are some great photos included, along with a collection of insightful quotes from Daniel himself at the top of each chapter. The Book of Daniel is a really well put together biography and I highly recommend it.

Thanks is extended to Allen and Unwin for providing me with a copy of The Book of Daniel for review.

Jeff Apter is the author of more than 20 music biographies, many of them bestsellers. His subjects include Johnny O’Keefe, Keith Urban, John Farnham, the Bee Gees, the Finn brothers and Angus Young of AC/DC. As a ghostwriter, he has worked with Kasey Chambers, Mark Evans (of AC/DC) and Richard Clapton. Jeff was on staff at Rolling Stone for several years and has written about legends such as Aretha Franklin, Patti Smith, Robbie Robertson, Bob Dylan, Chrissie Hynde and Lucinda Williams. In 2015, he worked on the Helpmann award-nominated live show A State of Grace: The Music of Jeff and Tim Buckley. Away from music, Jeff has also worked on books with soldiers and diplomats and sports greats such as Michael Slater and Tim Cahill. He lives in Wollongong, New South Wales, with his wife, two children and a cat that’s so damned cool it needs no name. www.jeffapter.com.au

6 thoughts on “New Release Book Review: The Book of Daniel by Jeff Apter”