Whiskey In a Teacup: What Growing Up in the South Taught Me about Life, Love, and Baking Biscuits 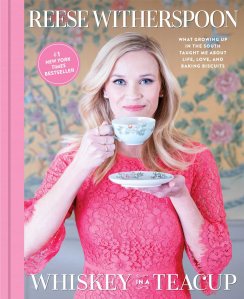 Academy Award–winning actress, producer, and entrepreneur Reese Witherspoon invites you into her world, where she infuses the southern style, parties, and traditions she loves with contemporary flair and charm.

Reese Witherspoon’s grandmother Dorothea always said that a combination of beauty and strength made southern women “whiskey in a teacup.” We may be delicate and ornamental on the outside, she said, but inside we’re strong and fiery.

Reese’s southern heritage informs her whole life, and she loves sharing the joys of southern living with practically everyone she meets. She takes the South wherever she goes with bluegrass, big holiday parties, and plenty of Dorothea’s fried chicken. It’s reflected in how she entertains, decorates her home, and makes holidays special for her kids—not to mention how she talks, dances, and does her hair (in these pages, you will learn Reese’s fail-proof, only slightly insane hot-roller technique). Reese loves sharing Dorothea’s most delicious recipes as well as her favourite southern traditions, from midnight barn parties to backyard bridal showers, magical Christmas mornings to rollicking honky-tonks.

It’s easy to bring a little bit of Reese’s world into your home, no matter where you live. After all, there’s a southern side to every place in the world, right?

Whiskey in a Teacup might just be the most joyous non-fiction book I’ve ever read. It’s a blend of memoir, lifestyle, beauty, recipes, etiquette, family and Southern social history, accompanied by a collection of gorgeous photographs throughout. Beautifully presented, it’s an ideal coffee table book and would make a perfect gift on account of its broad content.

Reese Witherspoon is of course a household name, but this book is by no means a glorification of herself and how famous she is. Overall, I felt like Whiskey in a Teacup just confirms what we’ve all been suspecting: that Reese is a really nice woman who loves her family, her Southern heritage, and sharing her lifestyle with those she is closest with. The entire book is refreshingly devoid of name dropping and stardom, with the only exceptions occurring when Reese is fan-girling over a celebrity herself (which just further enhances her ability to connect to others). I’ve always liked Reese as an actress, but after reading Whiskey in a Teacup, I now like and admire her as a woman who has created a successful business and followed her passion, while maintaining an impeccable public image. Reese writes in an intimate style, sharing stories and recipes, ideas and beliefs. Her grandmother Dorothea was a huge influence in her life and I guess I probably related to this the most, as both of my grandmothers had a profound influence on my life and many of the things Reese writes about with regards to her grandmother really hit home for me. Dorothea had some great advice to impart, but for me, this one was absolute gold:

‘Poor Dorothea would not be happy to see how many people travel in athletic wear these days. “You don’t wear sweatpants on an airplane,” she used to say. “It’s a privilege to fly. Make sure you wear a nice outfit.” I guess she is why I have a real mental block about wearing workout wear all day long. I just don’t do it. I think you gotta get up, you gotta work out, and then you gotta get dressed in a real, proper outfit by ten in the morning. I would never judge anyone for doing otherwise. But if I did it myself, I just know my grandmother would haunt me with that line she always said: “Only wear sweatpants when you’re supposed to be sweating.’”

Anyone who knows me personally will not be surprised that this spoke to me on an intimate level. I loathe the trend of wearing active wear as regular clothes and have been applying my best efforts at ensuring my daughter understands that active wear is not all day wear.

I’ve personally always been interested in the social geography of America’s South and this book is a great anecdotal account of the customs and lifestyles that are unique to this region. While Reese’s South is viewed through the lens of privilege, and let’s be honest, not everyone in the South is on the same level as Reese Witherspoon, by writing Whiskey in a Teacup as an ode to her family, we can appreciate that this is Reese’s South, not THE South. Whiskey in a Teacup is a beautiful tribute to Reese’s Southern heritage and will no doubt become a treasured book for her own children one day.

Reese Witherspoon, award-winning actress and producer, has created the kinds of unforgettable characters that connect with critics and audiences alike. She won an Academy Award® for her portrayal of June Carter Cash in Walk the Line and was later nominated in that same category for Wild in 2014, which she also produced. Her role in Wild also garnered Golden Globes, SAG, Critics’ Choice, and BAFTA Awards nominations. Other film credits include Sweet Home Alabama, Legally Blonde, and Election. She has executive produced and starred in two seasons of HBO’s critically acclaimed Big Little Lies, with the first season winning eight Emmy Awards, four Golden Globes, four Critics’ Choice Awards, and two SAG Awards. In addition to her acting and producer roles, Witherspoon is an entrepreneur. In 2016, she established Hello Sunshine, a media brand and content company dedicated to female authorship and storytelling across all platforms. In 2015, she launched Draper James, a retail brand with a focus on fashion, accessories, and home décor inspired by the American South. She is an advocate and activist for women’s issues across the globe.

4 thoughts on “New Release Book Review: Whiskey in a Teacup by Reese Witherspoon”