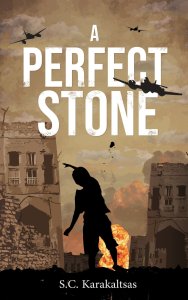 Cleaning out a box belonging to his late wife, he finds something which triggers the memories of a childhood he’s hidden, not just from his overprotective middle-aged daughter, Helen, but from himself. When Jim has a stroke and begins speaking another language, Helen is shocked to find out her father is not who she thinks he is.

‘During the Greek Civil War, it is estimated that there were up to 38,000 Aegean Macedonian and Greek children removed from their homes.’

The power of A Perfect Stone lies in its historical narrative, outlining the fate of Greece’s children during the years of the Greek Civil War. It’s an interesting account of one the side effects of war, the displacement of children via evacuation to ensure their safety. I’m not a huge fan of child narrators, but in this instance, it enhanced the story greatly. By journeying in Dimitri’s shoes as he was removed from his home, not given any information on where he was going and why – I can only assume that children weren’t entitled to know their own fate on account of being children – we are fully immersed in his perilous and fearful journey.

‘They know instinctively the forest will protect them from being seen and the first children desperately run to its safety. But too many are out in the open when a blackbird swoops past and the first ear-splitting explosion lights the side of the mountain.’

The heavy uncertainty that must have weighed on these children is conveyed so well and made for compelling reading. This is the first in-depth account of the Greek Civil War that I have read and it piqued my interest enough to set out and research it more fully. The end of WWII was not the end of war for many nations, some left in a state of destruction and desolation. I am finding myself more and more interested in this immediate post-war period of civil unrest.

‘In 1949, when the Civil War ended, Dimitri and the rest of the Macedonian children were told that the Greek Government had decreed them to be Greek, and the teaching of their language stopped. The Red Cross interviewed them and tried to reunite children with families. One by one they left until the only remaining children were orphans who became wards of the state.’

The women who spirited these children to safety were true heroes in my opinion. I would love to read more on this, but from their perspective. Carrying the weight of their own loss, these women travelled with large groups of children through rough terrain, uncertain of enemy occupation, with little to no food and water. In some cases, the only thing carrying them forward must have been a belief that what they were heading to was better than what they had left behind. I wonder if I would have the strength to be like these women, your own children dead, your husband most likely dead as well or imprisoned, trekking through forests and scaling a mountain while hiding from the enemy with a dozen or more children and other grieving women depending upon you for safe passage. Extraordinary.

‘A woman begins to hum. Then another. Soon they’re singing quietly and some of the children join in. It’s a song from home. A lullaby for babies. The children remember and for a short time they forget their tiredness, hunger and pain.’

Dual timeline narratives are tricky beasts, but they are booming in popularity at present. Regular readers of this blog will know that I have read a lot of these sorts of novels on account of my love for historical fiction. But they’re not my favourite mode of storytelling when it comes to this genre. Invariably, the contemporary story is linked to the historical one via a forgotten or mysterious box containing a photo or piece of memorabilia, letters or a diary. I’m not trying to be harsh here, but I’ve honestly, with no exaggeration, read hundreds of dual timeline narratives, probably half of them war related. I’ll overlook this commonality if the contemporary story is strong, and by that, I mean, it can hold its own in terms of story engagement and character development. The contemporary story in A Perfect Stone didn’t measure up for me. It wasn’t substantial enough, and it wasn’t engaging enough. I could certainly see the foundations the author was laying, but Jim was too sketchy to carry this narrative on his shoulders and the contemporary story came off as more of a filler than a driving force. A straight historical set during the years of the Greek Civil War would have carried more weight in my opinion, as the author seems very much at home within the historical fiction genre.

For anyone interested in reading about the Greek Civil War, A Perfect Stone is a good place to start. It’s a powerful tale of survival and loss, grounded in history.

Thanks is extended to the author for providing me with a copy of A Perfect Stone for review.

After many years in corporate life, S.C. Karakaltsas began writing her first historical novel in 2014. Climbing the Coconut Tree was released in March 2016. Since then she released Out of Nowhere: a collection of short stories in 2017 and has short stories published in the Lane Cove Literary Award Anthology and the Monash Writers Anthology. S.C. Karakaltsas lives in Melbourne, Australia with her husband, daughter and elderly cat.

#newrelease #bookreview up on the blog today! The Younger Wife by Sally Hepworth with thanks to @macmillanaus for the #bookreviewer copy.
New deck chair feels #freshstrawberries🍓 #goodread 📚 #summervibes ☀️ #christmasiscoming 🎄 #relaxtime
#currentlyreading #darkandmoody #newrelease Wendy, Darling by A.C. Wise with thanks to the publisher for the #bookreviewer copy @newsouthbooksau @titanbooks #readallthetime #readersofinstagram #bookstagram #bookbloggersofinstagram #ausbookbloggers