The Witches of St Petersburg… 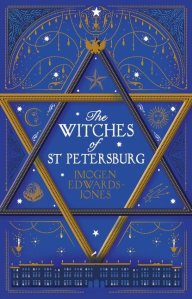 Brimming with black magic, sex and intrigue, a gorgeous historical novel for fans of Dinah Jefferies and Santa Montefiore.

The Russian Empire is on the verge of collapse. Revolution is in the air. The starving stalk the streets of St Petersburg and yet the Imperial Court still commute between their estates and organise their lavish balls.

Two sisters arrive in the city. Princesses from Montenegro; they are famed for their wild beauty and mystical powers. Initially ridiculed and outcast as the daughters of a provincial ‘Goat King’, they react in the only way they know how. They befriend the isolated Tsarina Alexandra and, using their gifts, they help her in her increasingly desperate quest to give birth to a son and heir. The circle closes. The girls are the gateway. Gurus, clairvoyants, holy fools and charlatans all try their luck. Then in one last, doomed, throw of the dice, the sisters introduce Rasputin into the Russian Court…

Based on the true story of the lives of Princess Militza and Princess Anastasia of Montenegro during the dying days of the Russian Empire, The Witches of St Petersburg is a tale of love, lust, power and betrayal at the heart of the Romanov Court.

I read a non-fiction book earlier this year about the Romanovs and it piqued my interest. My knowledge of Russian history, from any era, is incredibly sketchy, so this seemed like a novel I could sink into. The Witches of St Petersburg was certainly rich in the history of its era, particularly the ins and outs of court life; there was a gossipy vibe that ran through the narrative, one had to read closely and resist the urge to skim as the author wove a lot of necessary information into these gossipy passages. I did enjoy these at first, but this novel is very long and prone to repetition, particularly via this type of scene. There were also a lot of characters to keep track of, Russian royalty, and everyone seemed to have similar first names and titles. The list at the beginning of the novel was not helpful when you’re reading an ebook, it’s just far too much effort to flip back and forth all the time. Further testimony to the length of the novel is the fact that Rasputin doesn’t make an appearance until past the half way mark. I was a little confused prior to this, wondering where he was as I’d formed the impression he was a major player in the novel. Despite these quibbles, I still enjoyed The Witches of St Petersburg. Militza in particular was a favourite, I found her tenacity and foresight admirable. I don’t for a minute believe that she and her sister Stana were motivated by anything other than securing their own social statuses, but still, they ingratiated themselves and wove their brand of magic right into the heart of the Imperial palace, something many before them had tried and failed at. Yet despite the favour bestowed upon them by the royal couple, the ‘Black Princesses’ as they were known, had many enemies and had to tread a careful path, forever looking over their shoulders.

‘Mikitza could feel a wave of irritation. Why was Stana always so indiscreet? The maid didn’t need to know about their family, their business. Ever since the wedding the sisters had deliberately decided to keep their “customs” to themselves. And although there was an embryonic movement amongst the more enlightened at the fringes of St Petersburg society, it was not so long ago that witches were being hounded, dunked and burnt. Women still had to make cakes and hold “phantom” tea parties, even if they were going to do something so rudimentarily primitive as tasseomancy – reading tea leaves. So both she and Stana had to be careful to protect themselves.’

This novel is steeped in the supernatural, dark witchcraft and old world paganism. Militza is quite a powerful witch, more so than her sister Stana, although she seemed to need Stana’s energy for some of the more complex spells, so the two were rarely apart. This close relationship between the sisters was formidable, and while Militza was particularly protective of her younger sister, she retained her authority as the older, and more powerful sister, and rarely ceded to Stana’s wishes. It was Militza who had the closer relationship with the Tsarina Alix, and it was also Militza who was more involved with Rasputin. Although in his case, she believed she had conjured him through dark magic, believing herself to be his maker and controller. She was quite mistaken on this, Rasputin’s appearance in line with her spell more coincidence than design. Rasputin himself was richly characterised, he was a force on the page and took command of the scenes he was in. Not the most admirable of characters, a charlatan and sexual deviant, yet the charisma he supposedly had in real life was certainly realised on the page by the author, along with the repulsion he ignited in others.

‘Stana shook her head. “Militza, you can’t consort with the dead and expect to be left alone.”
“Says who?”
“Do you think you’re the only person who can dance with the Devil and expect him to listen when you ask to stop?”
“I have looked the Devil in the eye.” Militza raised her eyebrows, sounding pleased with herself. “All those séances, all those times we have used the Ouija board, where do you think I went?”
“You are scaring me now.”
“Don’t be so weak. You have known about our power all your life; it goes back centuries. Now is the time to use it.”
“But you will open Pandora’s Box!”
“And then…” said Militza, stubbing her cigarette in a silver ashtray, “I shall close it.”

The shallowness of court life was well depicted, how easily people fell in and out of favour. It was a cut throat circle to move in. I was somewhat taken aback by the prevalent use of cocaine and the high interest in mystics along with the superstitious beliefs many held fast to. One can almost see quite clearly why the revolution eventuated if the events within this novel are based on even a grain of truth. A drugged out Tsar deferring to his ailing wife who was afraid of everything and a virtual puppet for Rasputin. Hardly a pair to instil confidence. All in all this was an entertaining read, a vivid representation of the entwined lives of the Montenegro sisters with the Romanovs and the ill-famed Rasputin in the years leading up to the Russian revolution. An intriguing blend of historical and paranormal fiction.

Thanks is extended to Head of Zeus via NetGalley for providing me with a copy of The Witches of St Petersburg for review.

Imogen Edwards-Jones studied Russian at Bristol University. Her first book The Taming of Eagles was about the first 100 days of the collapse of communism. A writer and journalist, she has travelled extensively within the old Soviet Union, studying in Kiev. She is the author of twenty books including the best-selling Babylon series. She is married with two children, lives in London, is a member of the London College of Psychic Studies and an honorary Cossack