Welcome to Behind the Pen. Today my guest is S.C. Karakaltsas, here to share some insight into her writing process along with the details of her forthcoming novel, A Perfect Stone. Over to you Sylvia!

I spent many years in the corporate world before I accidentally discovered writing in 2014. I say it was an accident because I’d never set out with an intention to write. It hadn’t been a childhood dream or a lifelong goal. After my father passed away, I found a bunch of letters he’d written as a young man to my grandmother when he went to work on a phosphate island in the middle of the Pacific in 1948.

I began typing the letters to preserve them for the family. But as I typed, a story began to unfold as he mentioned snippets about labour unrest, racism and Colonial control. When he wrote a line to say how upset he was about a double murder of two Australians on the island, I just knew that I wanted to know more. Then I found another letter in amongst my father’s stuff from one of the Australians who had been murdered and it was like a hand reaching out to me from the grave. And so after a number of months of research, I wrote and published my historical fiction novel inspired by the events on the island called Climbing the Coconut Tree in 2016. I knew then, that I had found a passion for writing.

How many novels have you written and published? 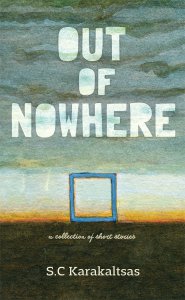 After I wrote and published Climbing the Coconut Tree, I turned my hand to writing short stories and poetry and was pleasantly surprised when one of my stories was short listed with the Lane Cove Literary Awards in 2016. Moving away from historical fiction, I published Out of Nowhere: a collection of short stories in 2017 which is a collation of stories of contemporary life.

A Perfect Stone will be released on October 10, 2018 which is my second historical novel, set in present day as well as coincidentally 1948 – somehow I can’t seem to get out of that year.

How long on average does it take you to write a novel?

That’s a really good question. Looking back on what I’ve written so far since 2014 it seems as if three works in four years is less than eighteen months for each but every book has taken at least two years of painstaking writing. It’s not so much the first draft that is slow, it’s the constant rework and rewriting which takes all the time. I also belong to a Writers Group and have workshopped all of my books with a group of about ten writers who don’t hesitate to give me great feedback.

I heard a story that 38000 Macedonian and Greek children from the age of 2 to 14 were forcibly evacuated from Northern Greece in 1948 during the Greek Civil War. Most walked barefoot through the mountains into communist countries – many dying, sick with disease and hungry. I also have a personal connection as my extended family were deeply affected by the Greek Civil War.

The story resonated with me and when I began my research, found heart wrenching stories of survival and loss. The plight of child refugees is a problem today as it was then and this disturbs me a lot.

What did you do when you finished this novel?

When I finished A Perfect Stone, I do confess to shedding a tear. Not from relief, but from the emotion of the story. I hope I’ve been able to convey that emotion to readers and that they are moved by it as I am from telling it.

For A Perfect Stone, I interviewed members of my extended family and also found stories from survivors in Canada as well as Australia. There’s not a wealth of information but I managed to find books and articles about child refugees from Greece as well as documentaries. A Perfect Stone is a fictional story which has political and ethnic controversy which for some, may be confronting, particularly those in Greece. For Climbing the Coconut Tree, I had my father’s letters of course but there was scant information so I used Trove, tracked down the police investigation, used the Court documents as well as interviewed people who had lived there in the past.

I’m actually a pantser and my novels evolve over a period of time. With A Perfect Stone, the original starting point is very different from the final product. I had more characters and tossed a few chapters away as the story presented itself to me. The main character, Jim Philips is amalgam of older men I know and some of his character is drawn from my own father so I had a fairly firm idea of what he was like.

I have a very comfortable study at home, with a large desk where I can spread out research papers and generally make as much mess as I like. I’ve written on trains and cafés and have written with writer friends. But I find that my study is the perfect spot for contemplation with little distraction except for the cup of tea my husband likes to make for me.

I love to read and have been an avid reader since childhood. I’ve also been a member of a fabulous book group for almost twenty years. I’m inspired by so many authors particularly Australian authors who I think are the best in the world. Perhaps, I’m just a little bit biased. I like to give a bit back so now blog my reviews on my website. I’m reading The Bridge by Enzo Gandolfino at the moment and thoroughly enjoying it. Set in Melbourne too, what else could you hope for?

Are you more of a print, e-book, or audio book fan?

An interesting question. I like eBook for travel and versatility but tend to gravitate toward print books as I like the look and the feel of paper. I’ve not tried audio but I sense that I’d get too easily distracted but I’m not averse to giving it a go.

Cleaning out a box belonging to his late wife, he finds something which triggers the memories of a childhood he’s hidden, not just from his overprotective middle-aged daughter, Helen, but from himself.  When Jim has a stroke and begins speaking another language, Helen is shocked to find out her father is not who she thinks he is.

A Perfect Stone will be available 10 October 2018

10 thoughts on “Behind the Pen with S.C. Karakaltsas”